“I am a dreamer. I know so little of real life that I just can’t help re-living such moments as these in my dreams, for such moments are something I have very rarely experienced.’

Lockdown has certainly given us tools to commiserate with the downtrodden dreamer of Dostoevsky’s White Nights.

Written in 1848, the story explores a man – who professes to have no experience of a life lived well – who encounters a young woman named Nastenka, sparking a friendship. The platonic union proves to be the man’s first true experience, and quickly he develops non-reciprocated romantic feelings towards Nastenka. Predictably, it can only end in tragedy for the protagonist who finds solace in his rejection by returning to his life of dreams.

Brian Ferguson expertly portrays the loneliness and childish qualities of Dostoevsky’s nameless protagonist, and his existential pleas are so pathetic they seem to demand an answer from the watching crowd.

Set in Pitlochry Festival Theatre’s newly-built outside theatre, the gentle background of the elegant trees and warm orbs of fairy lights contributes to the sense of magical realism and the show’s captivating quality.

And whilst many words can be used to describe Russian literature and Dostoevsky’s works – epic, dramatic (pretentious…?) –accessible probably wouldn’t be at the top of anyone’s list.

But the monologue allowed for a more understated feel, and a simple yet no less moving retelling of loneliness, which I believe resonated with many. 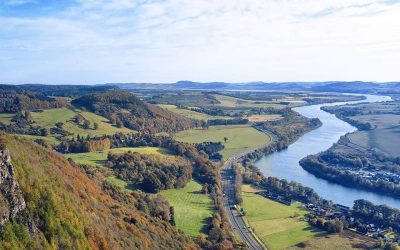