LISTEN: Fergus and Isara McCallum explain what they are proposing to start in Pitlochry

With authenticity at the centre of the project, they plan on offering traditional Thai servings within the nineteen eighties ascetic carriages set against a Victorian styled platform of the time.

Fergus McCallum said: “I love trains and my wife loves, ‘food’ (jumps in Isara McCallum), so I’m not quite a trainspotter but I do read train magazine and I do love trains.”

So far the railway carriages have been built and now they’re mostly waiting on the planning permission to come through, then some of the final plumbing and electrical work to finish off.

Local specialists, RW Bell are taking the lead in installing the railway restaurant if the council decides to approve the project.

However, one objection made publicly, as part of the process, voiced: “There also the fact that Pitlochry does not need any more restaurant/café/takeaways. The area is overrun with places to eat we now need diversity in the area. What the area needs is clothes shops, shoe shops and a big supermarket. Not more places to eat.”

Mr McCallum doesn’t believe he will be interfering with the other businesses since he’s offering a novelty service.

“We’re not offering a café; we’re opening what I think is a restaurant and we’re hoping to sell top end food in it.

“I’ve noticed a couple of owners of cafés who’ve expressed that, but as I said to the community council, I don’t think it’s the same market.”

Others have also voiced their concern that the town’s parking will be reduced since the carriages are applying to be placed on top of the existing car park by the train station.

One objection noted: “It is a fact that there is a direct correlation between the number of parking spaces and the number of visitors who congregate whether the focus is a shop, town, visitor attraction or beauty spot. Therefore, this development actually reduces the town’s economic potential, and could be likened to self-harm if approved.”

Mr McCallum says that the project originally planned to use some spare land from Network Rail and set up the carriages near the stations there.

But he says that after they announced the electrification of the Highland Mainline, they couldn’t commit the land to him and his partner because they could need to use this land as a marshalling place during their own project.

He explained: “We’d gone so far, we’d acquired the carriages, we started the work and suddenly the offer of land was pulled out.

“I approached Perth council and also approached business gateway to try and see if there’s any other options to rescue the project.”

If the permission is granted and the council offer their car park space for the carriages, Isara McCallum wants to bring her own unique cooking skills to the restaurant.

Mrs McCallum said: “I will create all the recipes because I love to cook and I think it will be good because my family love it, my friends love it, so I think people will get excited for the recipes.

She’s planning to mix the ingredients with a blend of locally sourced Scottish food and authentic Thai food fuse.

Mrs McCallum added: “We’re going to be a little bit of a mix between Scottish and Thai so we’re going to try make it tasty.”

February 22 marks the final chance for locals to voice their opinion on the project.

Anyone looking to have their say can go to: https://planningapps.pkc.gov.uk/online-applications/applicationDetails.do?activeTab=summary&keyVal=QLU274MKIBL00 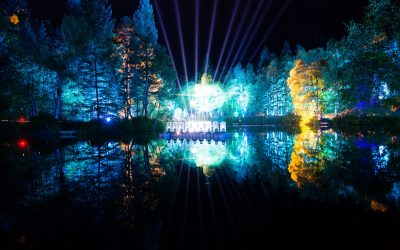 The Enchanted Forest Looks to Celebrate its 20th as Lockdown Eases

Scotland Starts on the Roadmap out of Lockdown