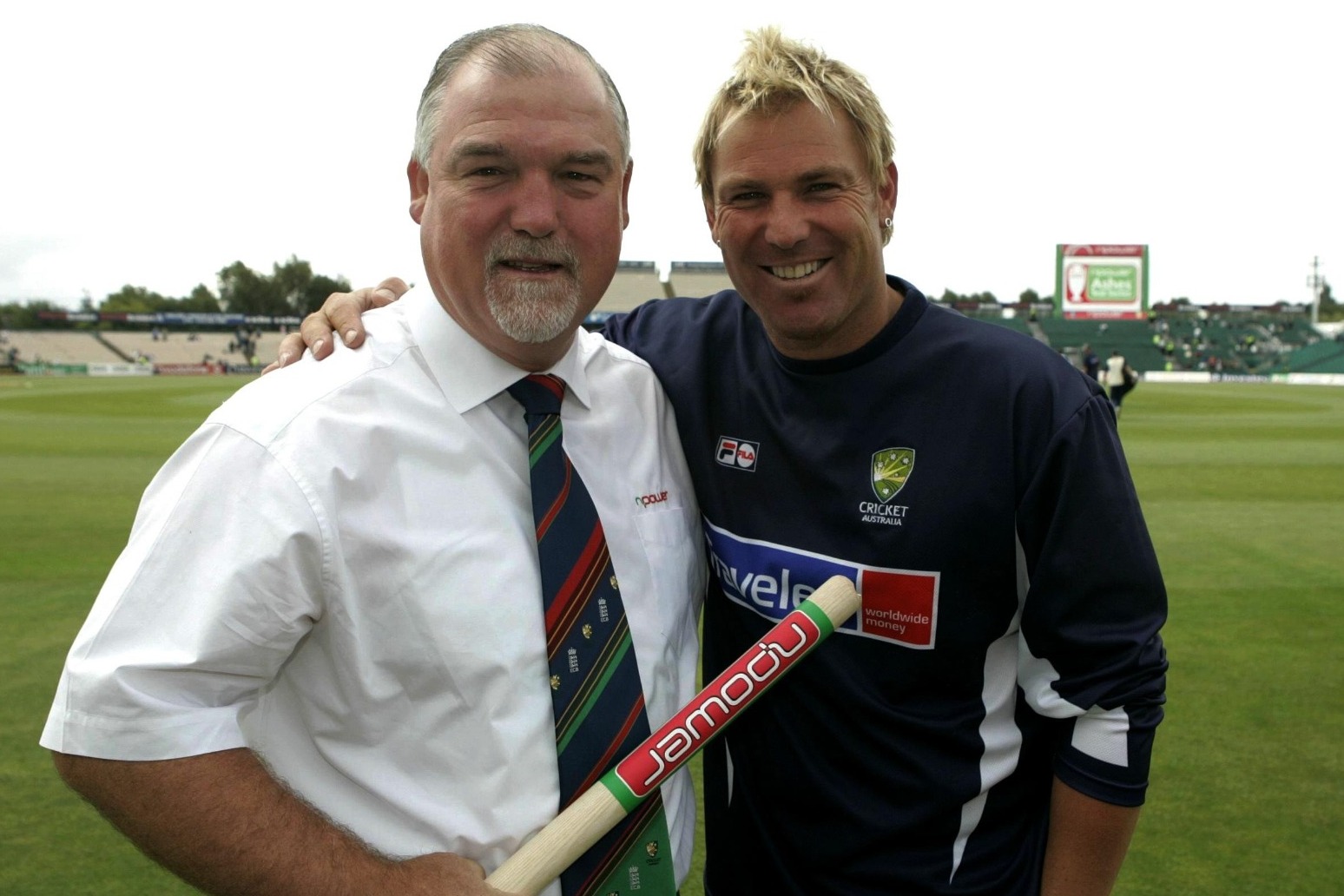 Mike Gatting hailed Shane Warne as cricket’s “number one” after the death of the Australian great on Friday.

It was Gatting who faced Warne’s ‘ball of the century’ at Old Trafford in the 1993 Ashes series, a delivery which catapulted the leg-spinner into stardom.

Warne, who has died at the age of 52, would finish with 708 Test wickets, second only to Muttiah Muralitharan but his influence on Australia’s all-conquering side across several formats during a 15-year playing career contributed towards a legacy that inspired generations of cricketers.

“Absolutely devastating and I just feel so sad for his family. It is a huge loss to many, many people,” former England captain Gatting told Sky Sports News.

“Without a doubt, he is the number one ever. I should think there have been a lot of great cricketers, great spinners and great leg-spinners but Warnie will always be, certainly from my point of view, the number one.

“He had all the things a cricketer needed, a lot of self-confidence, a lot of ability, the discipline, passion and desire.

“Above all he had time to enjoy it. He had great fun playing cricket and resonated with a lot of youngsters. The inspirational leg-spin he bowled I am sure inspired many, many guys to take up leg-spin bowling.”

Named as one of the five Wisden Cricketers of the Century, it was Warne’s leg break that landed outside of Gatting’s leg stump which spun off the surface and hit the top of off stump almost 30 years ago that got the ball rolling for the Victorian against England.

He claimed 195 Ashes scalps but his maiden wicket against his greatest rivals with his first ever ball is still widely regarded as the moment leg-spin became fashionable again.

“He said he just tried to get it down the other end the best he could. Well, it was a bit too good for me.”

Michael Vaughan captained England to victory in the 2005 Ashes, a series where Warne would take 40 wickets to once more establish his greatness.

After the leg-spinner retired two years later, he would go on to spend plenty of time in commentary boxes with Vaughan and hosted him at Christmas time last year.

“I am absolutely gutted to have a lost a great friend. One thing is for sure Heaven will be a lively place now the King has arrived,” Vaughan said on Instagram.

“Shane was the greatest ever cricketer but more than that his character lit up every dressing room, comm box, bar, golf club and friendship group. His energy and positivity was beyond anyone I have ever known, he was loyal beyond loyal.

“At a time I needed support he was the first to pick up the phone and over (sic) advice/help and the most utmost support. I will never ever forget the warmth he and his family gave me this winter when I was down under for Xmas alone.

“To say I spent Warneys last Xmas with him and his family is so sad but one I will cherish.

“Everyone wanted to be around him but ultimately he was just a normal guy who could do incredible things.”

Sir Andrew Strauss, another former England captain, played in the 2005 Ashes and was also on the end of an explosive delivery from Warne at Edgbaston which was likened to his famous ball against Gatting.

He told BBC Five Live: “That one ball is the one that keeps getting played over and over again. Every time I watch it, I get more embarrassed by it.

“I was the latest in a long list of people who were made to look foolish by Shane Warne. He was a wizard, he had great variety in the way he bowled and also he had this incredible aura in the middle and taunted you to play the man, not the ball.”

Strauss continued: “He literally was the greatest showman. There were other great cricketers, who when you look at their record would potentially equal Shane’s or maybe even better them but there was no greater star in cricket than Shane Warne, certainly in the time I have been around.

“His contribution to the game of cricket is unmatched and unrivalled, I think. We should all be happy and proud to have played against him and watched him in action because no one grew the sport the way he did.

“It is just so hard to believe he is not with us anymore. He was one of those characters who had so much vibrancy and energy about him, you never thought his time was anywhere near up.”

Former England captain Mike Atherton hailed Warne as one of the all-time greats.

Speaking to Sky Sports News, Atherton, who was dismissed by Warne 10 times, said: “Up until that first Ashes Test at Old Trafford in 1993, we had not seen much of him.

“He came under the radar, but not after he bowled Mike Gatting and then for the next 15 years he was the superstar of the game.

“He is the greatest leg-spinner the game has seen. You are talking about a cricketer who stands tall with (Don) Bradman and (Garfield) Sobers and these absolute giants of the game.

“What a dreadful week for Australian cricket losing two giants like Rod Marsh and Shane Warne.”

Broadcaster and former Hampshire captain Mark Nicholas was a friend of Warne’s, he told talkSPORT: “He turned a whole generation around to a new rock-and-roll type of cricket, he played to a level never been seen before.”

Stokes said it “was an honour to know you and work with you” while Buttler labelled him “the greatest to ever do it.”

Former West Indies star Brian Lara described Warne as “one of the greatest” in a post on Twitter.

He wrote: “We have lost one of the Greatest Sportsmen of all time!! My condolences goes out to his family. RIP Warnie!!”

India batter Virat Kohli said: “Life is so fickle and unpredictable. I cannot process the passing of this great of our sport and also a person I got to know off the field. RIP #goat. Greatest to turn the cricket ball.”