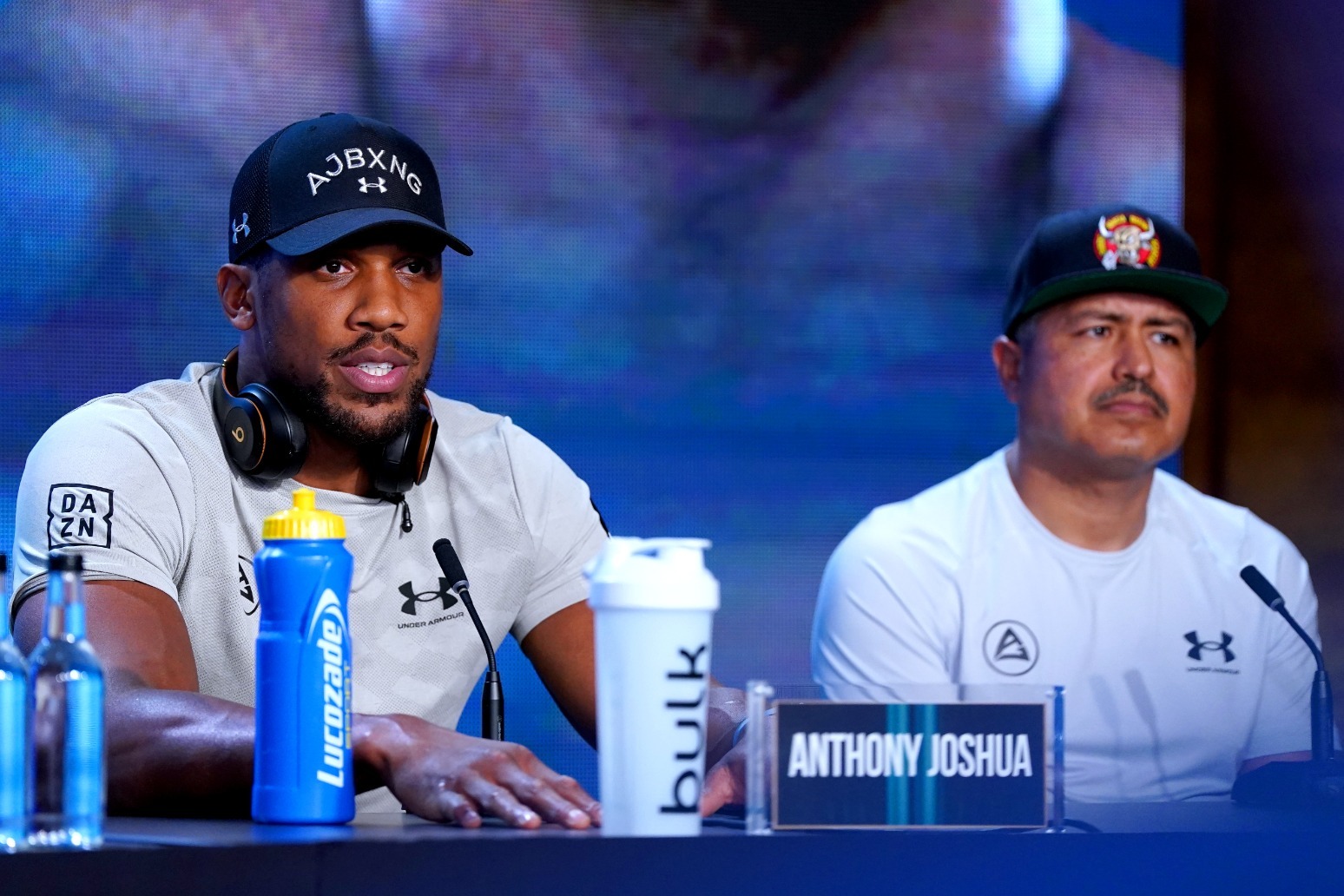 Anthony Joshua admitted he is “definitely hungry, definitely desperate” to become world heavyweight champion again and is seeking a knockout of Oleksandr Usyk in their rematch.

Joshua (24-2, 22KOs) was outclassed last September by his Ukrainian rival, who defied disadvantages in height, reach and weight to claim the WBA, IBF and WBO titles after a clear unanimous decision victory.

Many observers believe Joshua’s best route to victory in the return bout in Jeddah, Saudi Arabia, on August 20 is inside the distance, using his physical superiority to disrupt Usyk’s rhythm.

Having linked up with new trainer Robert Garcia, Joshua hinted that is the gameplan but the former two-time world heavyweight champion refused to stoke the fires too much at a press conference in London.

“What happened then is in the past, I don’t really live in the past, I’m just present,” he said. “I’ll be looking to be competing round-by-round and if I follow my As, Bs and Cs, it should lead me to KO.

“Someone said to me ‘you’ve got a chance to become three-time heavyweight champion of the world’. I said ‘it’s not where you want to be, I wouldn’t advise anyone young to go down that route’.

“You want to stay there and keep it, so I’m definitely desperate to get my hands on it. (But there’s) too much talking. Less talk, more action. I’m not a comedian, I’m not someone who likes big speeches.

“Let me get in there and do my job, that’s my priority. I’m definitely hungry, definitely desperate but how I perform will speak volumes to the masses.”

While Joshua revealed he was troubled by Usyk’s southpaw stance nine months ago, he insisted there is not much to draw on despite sharing 12 rounds with the former undisputed world cruiserweight champion.

“It’s a rough and tough sport, especially fighting these lefties – they’re a nightmare,” he added. “It is what it is, you’ve got to dig deep, tuck up and not make the same mistake twice, basically.”

“Every fight’s different. Until you’re in front of someone, no matter how many videos you’ve watched, stare downs you’ve had or press conferences you’ve done, it’s just completely different in the ring.

“Twelve rounds is good, don’t get me wrong, but it’s going to be completely different when that bell rings if I’m honest. You can’t take too much away from it, you’ve just got to be in the moment.”

Usyk has won all 19 of his professional contests and wore a blue and yellow T-shirt with the message ‘Colours of Freedom’ in homage to his native Ukraine in the midst of Russia’s invasion of the country.

He helped with the war effort against Russia, initially putting in jeopardy a second fight against Joshua, before being given special permission to defend his world titles against the Briton.

While this will be Joshua’s second fight in Saudi Arabia – he avenged his only other defeat against Andy Ruiz Jr in 2019 in Diriyah with a points win – it will be Usyk’s first in the country.

Saudi Arabia has been routinely accused of human rights violations and has faced claims of attempting to ‘sportswash’ its reputation but while there were no questions asked about the Gulf State’s reputation, Usyk seemed to indicate money was not the driving factor in his decision to fight there.

“It opens some new horizons,” he said. “I’m not fighting for money or the recognition, many people want the recognition so others remember them. But I don’t need to become the great.

“I’m just doing my job now and I will continue doing it while my heart is beating. The only thing I’m on my way to is to save my soul. Everything else that is happening to me is just life.”