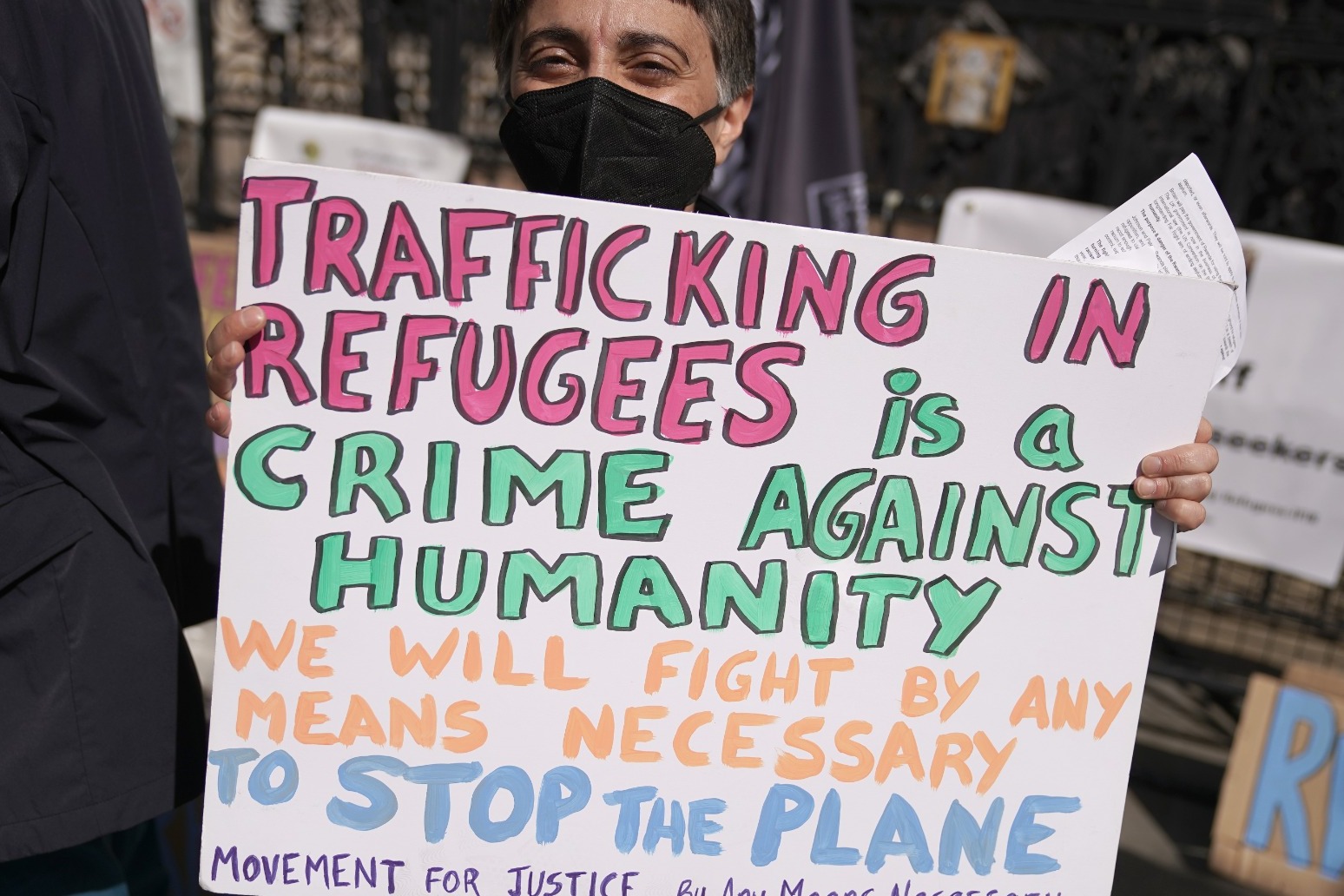 Asylum seekers due to be on the first flight to Rwanda under the Government’s controversial relocation policy have lost last-ditch legal bids to remain in the UK.

Four men who challenged their removal at the High Court in London had their cases dismissed, while a fifth man lost a bid to bring an appeal at the Supreme Court.

The result of the hearings means the flight is understood to be leaving the UK for the east African nation on Tuesday night with seven people on board.

However, it is possible there may be urgent attempts to issue further challenges at the Court of Appeal on Tuesday evening.

Earlier on Tuesday, the Supreme Court rejected an appeal bid by an Iraqi man due to be on the flight.

He was one of a number of people who brought legal bids to be removed from the flight, due to leave the UK on Tuesday night, at both the High Court and the Court of Appeal – although the rest were removed during the court proceedings.

His case was heard on Friday and Monday alongside a joint legal action by migrant charities and the union representing the majority of Border Force staff in a bid to prevent people being taken to Rwanda before a full judicial review of the policy is heard next month.

A panel of three Supreme Court justices refused the man permission to challenge the Court of Appeal’s ruling on Monday, which upheld the earlier decision of a High Court judge not to grant an injunction to remove him from the flight.

Giving brief reasons for the decision, the court’s president, Lord Reed, said there had been an “assurance” by the Government’s legal department that, if the policy is ultimately found to be unlawful, steps will be taken to bring back any migrants who are flown to the east African nation in the interim.

The judge said that, in bringing his claim to court, the man’s lawyers were “performing their proper function of ensuring that their clients are not subjected to unlawful treatment at the hands of the Government”.

The flight is expected to depart within hours and the man is one of seven people currently due to be on board, after several others were removed from the scheduled flight following legal challenges and reviews by the Home Office.

Lawyers representing another four of the seven asked Mr Justice Swift at a hearing in London on Tuesday for an order preventing their removal to the east African nation.

However, the judge rejected all four of their challenges.

At least one of the men is expected to make an urgent application to the Court of Appeal, which is likely to be heard out of hours by a single judge over the telephone.

The judge previously refused to grant a general injunction that would have prevented the flight, and potentially any further planned flights, from taking asylum seekers from the UK to Rwanda pending the outcome of a full judicial review of the policy – expected to be heard at the High Court in July.

The Public and Commercial Services union (PCS), which represents more than 80% of Border Force staff, and charities Care4Calais and Detention Action challenged his refusal to grant the injunction at a Court of Appeal hearing on Monday.

However, that appeal was dismissed by three senior judges, who said there was “no error” in Mr Justice Swift’s decision and that he had not assessed the evidence in an “unreasonable manner” – the only two possible reasons for overturning such a decision.

Ministers had initially planned for up to 130 people to be on board the plane but Care4Calais, one of the charities that brought a legal bid to block the flight ahead of a full High Court review of the policy in July, said that only seven migrants expecting to be removed still have live tickets.

The policy has drawn widespread criticism, including from Church of England leaders and reportedly the Prince of Wales.

The Home Office has defended the policy and the Prime Minister has said the Government had anticipated “a lot of teething problems” with the policy, but added that the move is necessary to stop illegal people-smuggling rackets on either side of the Channel.

Ahead of the hearings on Monday, Boris Johnson told broadcasters during a visit to a farm in Cornwall: “I always said that it will begin with a lot of teething problems and you will have a lot of legal action against it and they will try and delay it – that’s inevitable.

“But what we’re trying to do is stop the business model of criminal gangs who are preying on people moving them across the Channel in unseaworthy vessels, risking their lives and sometimes costing their lives.”

It came as Rwandan high commissioner Johnston Busingye told The Telegraph that his country will be a “safe haven” for migrants, after The Times and the Daily Mail reported that the Prince of Wales allegedly said in private that the policy is “appalling”.

Mr Johnson declined to comment on whether Charles was wrong in his comments, adding: “This is about making sure that we break the business model of criminal gangs who are not only risking people’s lives but undermining public confidence in legal migration.”