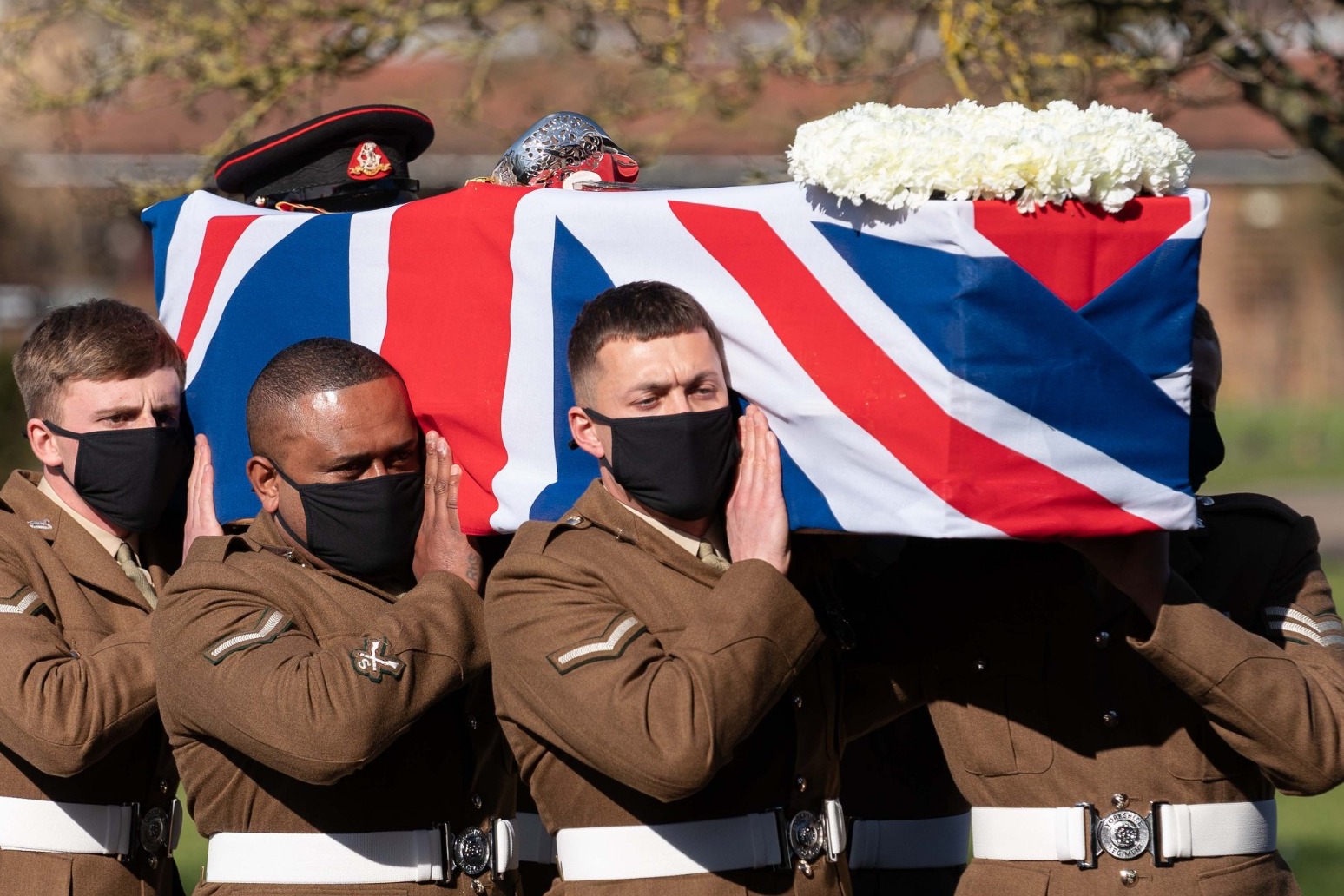 The family of Captain Sir Tom Moore have paid tribute to the veteran and NHS charity fundraiser at his funeral, saying his “message and his spirit lives on”.

Sir Tom’s coffin, draped in a union flag, was carried to the crematorium on Saturday by soldiers from the Yorkshire Regiment while a Second World War-era C-47 Dakota performed a flypast.

This was followed by a firing party of 14 each firing three rounds in unison before a small service got under way.

The service, at Bedford Crematorium, was attended by eight members of Sir Tom’s immediate family – his two daughters Hannah Ingram-Moore and Lucy Teixeira, four grandchildren and his sons-in-law – all wearing masks.

It opened with the charity single Sir Tom recorded with Michael Ball and the NHS Voices of Care Choir, You’ll Never Walk Alone, which reached number one in the UK singles charts in April last year.

His daughter Ms Teixeira, 52, then paid tribute to Sir Tom, who captured the hearts of the nation with his fundraising efforts during the first coronavirus lockdown when he walked 100 laps of his Bedfordshire garden before his 100th birthday, raising more than £32 million for the NHS.

She said: “Daddy, you always told us ‘best foot forward’ and true to your word that’s what you did last year, raising a fortune for the NHS and walking your way into the nation’s hearts.”

Ms Teixeira added: “Daddy, I am so proud of you, what you achieved your whole live and especially in the last year.

“You may be gone but your message and your spirit lives on.”

Ms Ingram-Moore said that the world had become “enthralled” by her father’s spirit of hope, positivity and resilience.

She added: “We are so proud of the way you handled everything that happened.

“We have been so close as a family before this but we were thrust even closer together as the world became enthralled by your spirit of hope, positivity and resilience.

“They too saw your belief in kindness and the fundamental goodness of the human spirit.”

Sir Tom died at Bedford Hospital on February 2 after testing positive for Covid-19.

The funeral cortege of Captain Sir Tom Moore set off from his home in Marston Moretaine at 11.30am.

A number of special items were placed on Sir Tom’s coffin, including a replica of his service cap from the Second World War, a wreath from the Yorkshire Regiment, his campaign medals, including the Burma Star, and his knighthood medal stitched on to a cushion.

There is also a specially-commissioned sword engraved with the motto of the Yorkshire Regiment on one side – “Fortune favours the brave” – and his own personal motto, “Tomorrow will be a good day”, on the other.

Singer Michael Buble recorded a version of the song Smile which was played at the funeral, along with The White Cliffs Of Dover by Dame Vera Lynn, I Vow To Thee My Country by Alife Boe and My Way by Frank Sinatra.

Members of the public were asked to stay at home and not attend the funeral, but many thousands of people have signed an online book of condolence instead.

In acknowledgement of his fundraising, Sir Tom was knighted by the Queen during a unique open-air ceremony at Windsor Castle in summer 2020.

Sir Tom’s 100th birthday celebrations last year included a Spitfire flypast and he was photographed punching the air as it went past.

The fundraiser served with the Duke of Wellington’s Regiment during the Second World War.

The regiment later merged with two others from Yorkshire, becoming the Yorkshire Regiment, and Sir Tom was made an honorary colonel last August.

A bugler will sound The Last Post at the end of the private service.

Six representatives from the Army Foundation College in Harrogate, where Sir Tom was made an honorary colonel, will then form a ceremonial guard.

There are plans to plant trees around the world in his honour, with Ms Teixeira hoping the Trees for Tom initiative will result in a wood in his home county of Yorkshire and the reforestation of part of India, where he served during the Second World War.

Once Covid-19 restrictions permit, the family will inter Sir Tom’s ashes in Yorkshire, with his parents and grandparents in the Moore family plot.