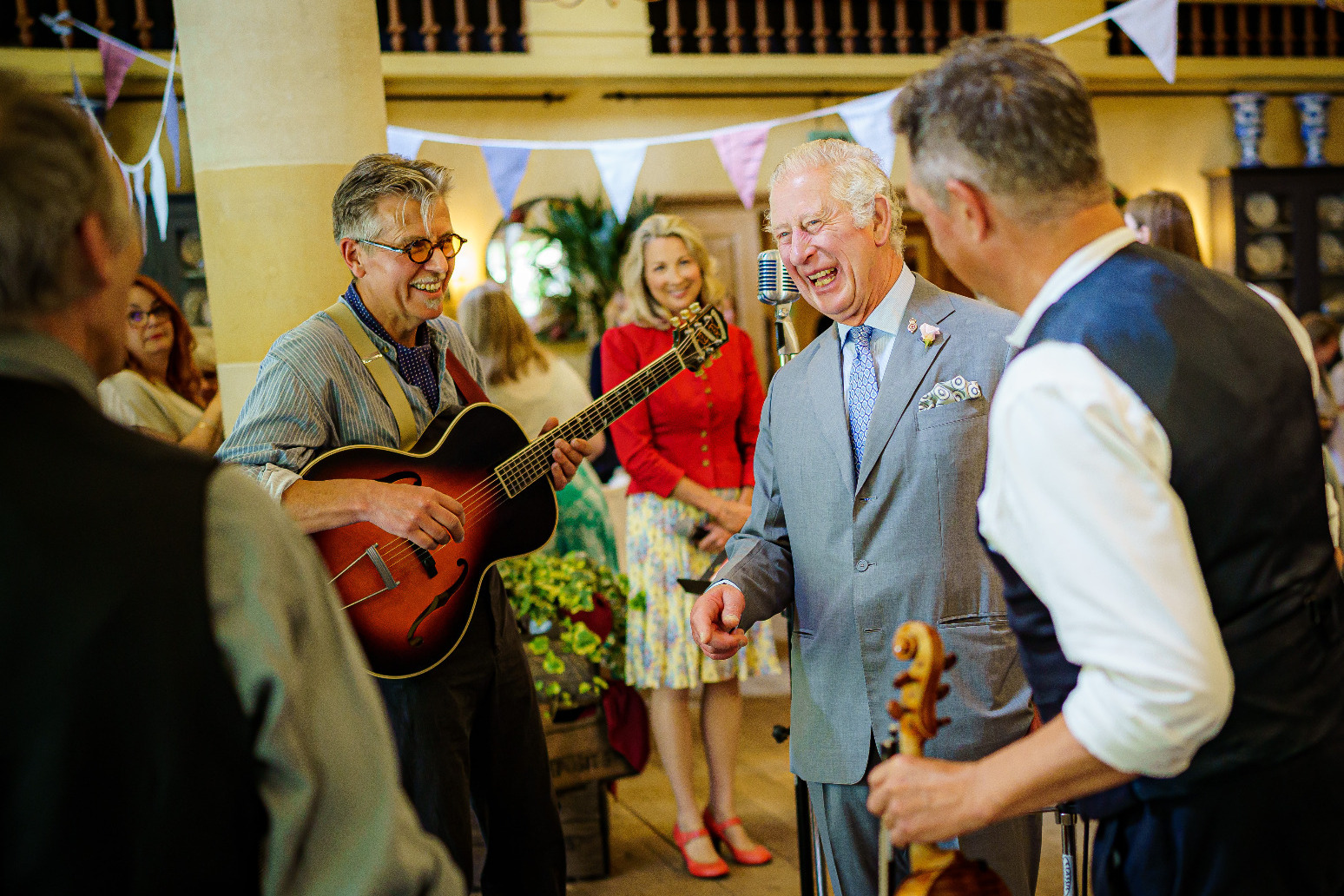 Charles, along with TV star Jools Holland and soul singer Ruby Turner, surprised more than 250 older guests on Tuesday at a bash thrown by the Prince’s Foundation in the Orchard Room of Highgrove House

The Prince of Wales swung into the Queen’s Platinum Jubilee celebrations this week at a tea dance held at his private residence in Gloucestershire.

Charles, along with TV star Jools Holland and soul singer Ruby Turner, surprised more than 250 older guests on Tuesday at a bash thrown by the Prince’s Foundation in the Orchard Room of Highgrove House.

The event, held as a way combat loneliness and isolation within the community, saw men and women from the local area enjoy an afternoon tea of finger sandwiches, scones and a glass or two of Highgrove prosecco, while socialising and enjoying live music.

Guests were unaware the prince would be joining them, and his entrance was met with delighted gasps.

Immediately after arriving, Charles sat down with special guest Elizabeth Powell, from Highnam, who celebrated her 100th birthday on May 6.

He presented her with a bouquet of flowers from his gardens and a handwritten birthday card, the front of which was decorated with a print of one of his own paintings.

Holland and Turner got the room to sing Happy Birthday to the centenarian.

Mrs Powell said afterwards: “I’m so surprised by everything, its so beautiful here and Prince Charles was so very nice, bless him.

“He wished me a happy birthday and asked if I was keeping well and if I live on my own, which I do in a bungalow not far from my son, his wife and my grandchildren.”

She said she was “all geared up” to watch the jubilee and was looking forward to attending a street party and village fete with her family.

Asked for her secret to a long life, she replied: “I like to have a glass of red wine in the evening. And sometimes I have a sherry at lunchtime as well.”

A local Lindy Hop group, Cheltenham Swing Dance, were on hand to get the dancing under way.

After greeting most of the guests, Charles joined dancer Bridget Tibbs for a tango to a rendition of Just Softly As A Morning Sunrise, performed by The Honeymoon Swing, with his entrance to the dancefloor greeted by applause.

Ms Tibbs told the PA news agency: “We were talking about dancing and then I said, ‘Would you like to have a little dance’? I thought, you’ve got to ask. He came back a few minutes later and said, ‘Shall we have that dance?’

“It was wonderful. He was very lovely to dance with, a lovely sense of rhythm, a nice hold. It was a pleasure.

Ms Tibbs, an alpaca farmer, added: “He was delightful to talk to and we had a good chat. I was actually talking to him about environmental issues and saying the work that he does is amazing.”

Audrey Webber, 61, who began Highnam’s Goodneighbour Cafe, which started during Covid-19 lockdowns as a support group for those feeling isolated, said: “It is so important, what they’re doing here, especially after the lockdown, which has exacerbated people’s feelings of loneliness.

“Seeing the smiles on people’s faces today is just so lovely.”

Anna Gibbins, 64, from South Cerney, an Age UK volunteer whose husband recently died with dementia, said: “Older people tend to feel invisible but they have a part to play in society, and many have hidden talents that we should all want to capitalise on.

“Events like this help people feel special, loved and connected.”

Every guest at the tea dance was given a gift bag with items donated by friends of the Prince’s Foundation including a Penhaligon’s hand cream, a Halcyon Days tea tidy, a scarf from Johnstons of Elgin, a David Austen mug or teacup and saucer, a voucher for a David Austen rose, Highgrove berry tea, a Platinum Jubilee keyring and candle, and a mini Bramley hand wash or hand cream.

The first of four tea dances took place on Monday at the Garrison Chapel in Chelsea, the foundation’s exhibition space in west London, where pianist Joe Thompson and a choir featuring pupils from nearby Francis Holland School provided the entertainment.

On Wednesday a large event will be held at Dumfries House in Ayrshire, followed by another at the Castle of Mey in Caithness on Thursday.

The Prince’s Foundation hosts such events every three weeks at its Dumfries House headquarters with funding from the People’s Postcode Lottery.

Guests of the tea dances are identified by partner organisations from across Britain, including Age UK, East Ayrshire Vibrant Communities and Befriending Caithness.

To decorate each of the four venues, thousands of triangles to form bunting were sewn by members of the Dumfries House Sewing Bee, another of the foundation’s initiatives aimed at providing people with a social environment.

Savile Row tailor Patrick Grant, co-presenter of the BBC’s Great British Sewing Bee, helped put the finishing touches to the bunting in the pavilion of the Ayrshire country house.

Simon Sadinsky, executive director of the foundation, said: “Social isolation is a widespread issue which has been felt more keenly than ever by many over the past two years, and it has been great to see so many people enjoying the opportunity to socialise with others in their local communities.”