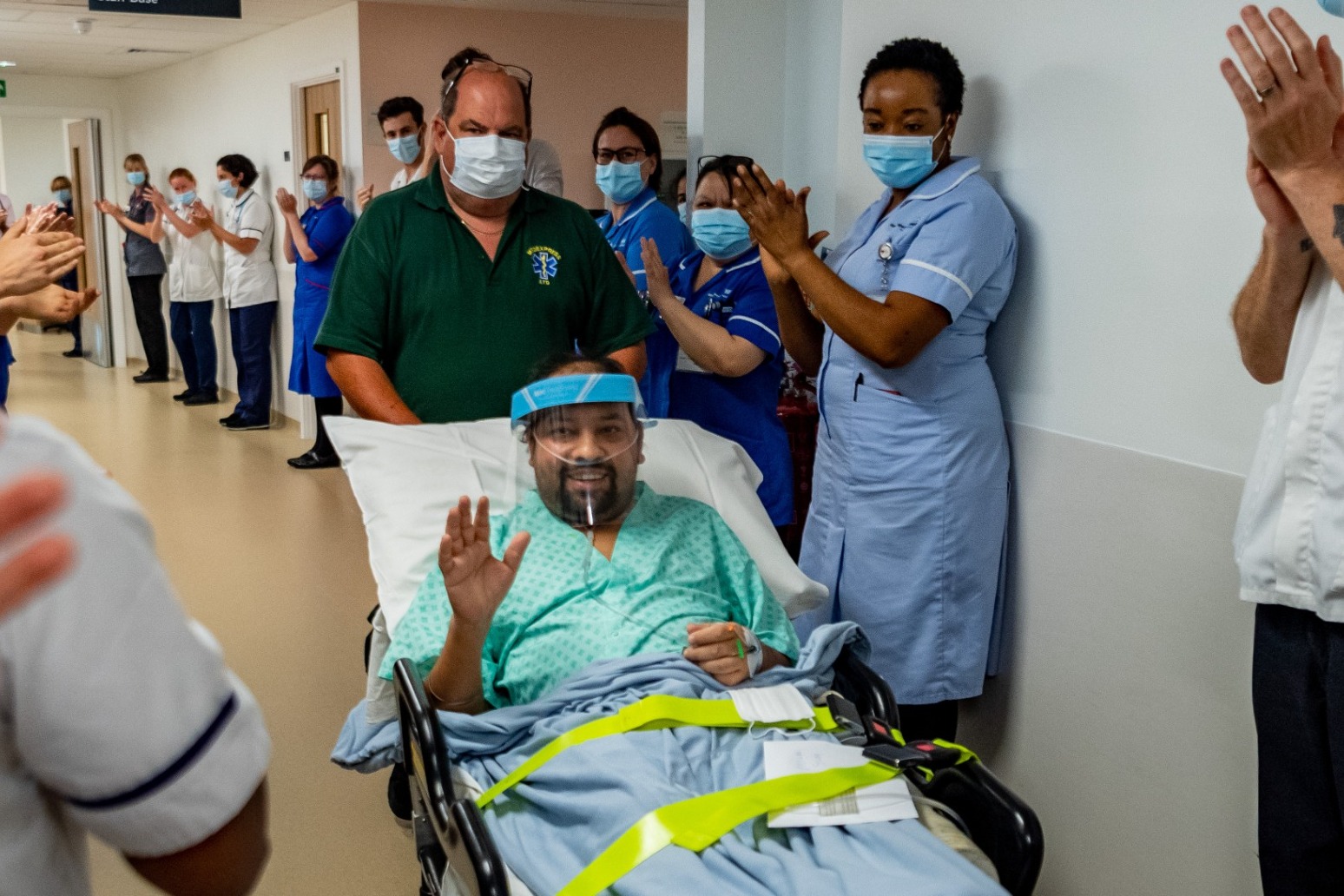 A father who was treated for coronavirus for more than five months is looking forward to being reunited with his wife and two young children after being discharged back to his local hospital.

Royal Papworth Hospital Foundation Trust said Rajinder Singh, 38, had broken the record for time spent on an artificial lung at the hospital in Cambridge.

Staff lined the corridors of the hospital to clap for Mr Singh when he was discharged on Thursday after 151 days of care and treatment from hundreds of staff.

He will continue his recovery at his local hospital in Essex, where he hopes to soon be reunited with his wife Sukhpal and two children, aged four and one, the hospital said.

Mr Singh praised the staff for being “kind, compassionate and helpful” and for giving his family regular updates on his condition – sometimes several times a day.

He added: “I’m not going home yet but I’ll be a few miles from my home, so hopefully it will be easier for my wife to visit me more often.

“I can’t wait to see my wife and children and give them a hug. I’ve missed them so much.

“I feel stronger every day and, when I can, I will get my Covid-19 vaccine as I’ve been in hospital during most of the time the vaccine has been rolled out.”

Royal Papworth Hospital said that Mr Singh, a double glazing fitter, had been in a local hospital for two weeks before being admitted to the Cambridge hospital on January 31, and put onto ECMO (extracorporeal membrane oxygenation) – an artificial lung used to oxygenate blood outside the body when other types of ventilation fail.

Mr Singh, who was put into an induced coma in January and woke up from it in April, was discharged from critical care in June after 142 days, 132 of which were spent on ECMO, it added.

The average time spent on ECMO at Royal Papworth during the first wave of the coronavirus pandemic was 30 days, the hospital said.

Mr Singh then spent a further nine days on a respiratory ward, taking his total inpatient stay to 151 days.

Jo-anne Fowles, consultant nurse for ECMO and critical care at Royal Papworth Hospital, said: “This really is an exceptional case.

“For context, the average length of time for our patients supported on ECMO pre-Covid was about 14 days.

“During the first surge in spring 2020, the average time for our Covid-19 patients on ECMO was extended to more like 30 days.

“Some needed longer, but Mr Singh is the longest we have ever supported a patient on ECMO at Royal Papworth Hospital.

“To see his condition improve to the point where we could discharge him to our colleagues on our respiratory ward and then back to his local hospital is wonderful.”