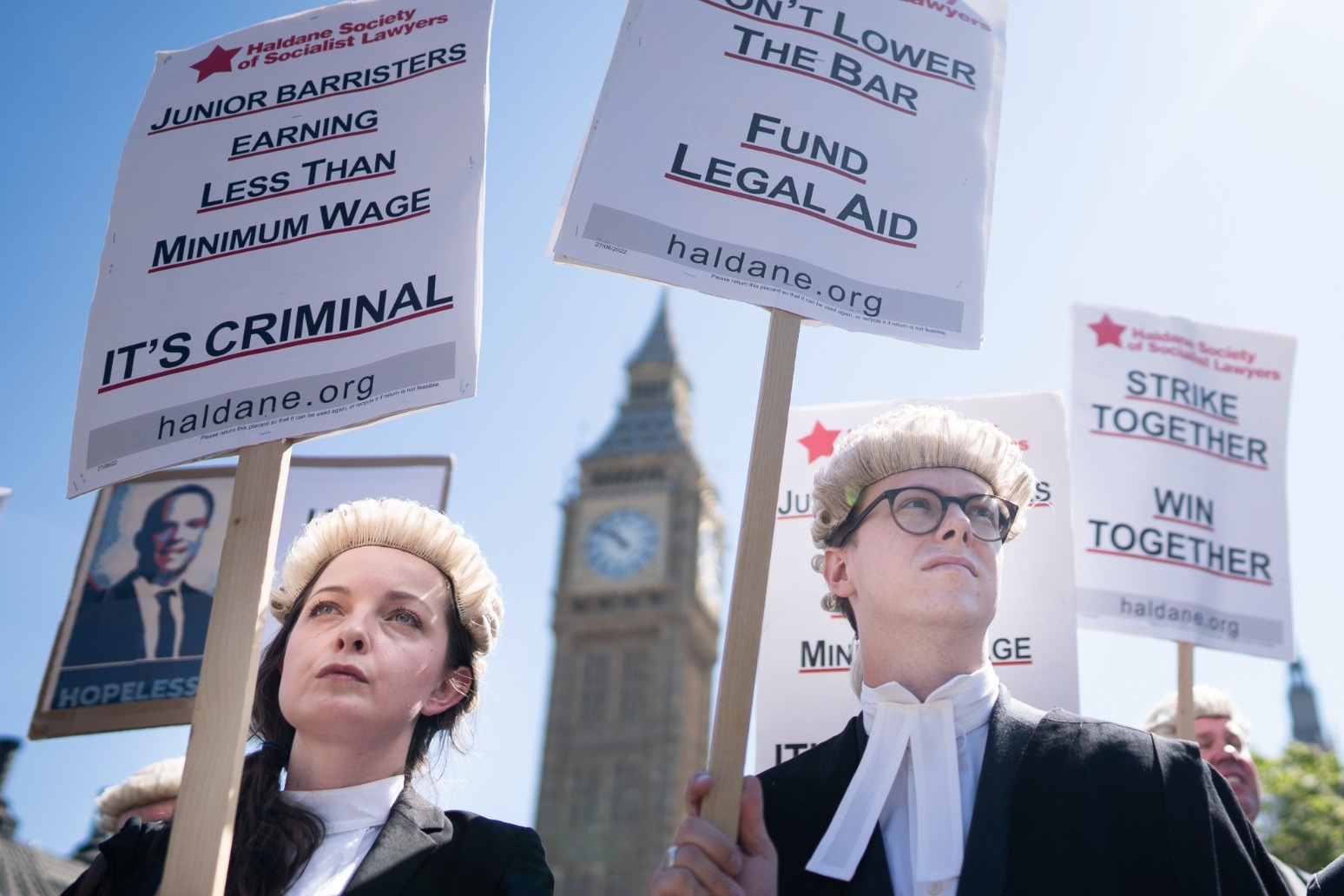 Criminal barristers in England and Wales have voted in favour of an all-out strike in a row with the Government over jobs and pay.

Members of the Criminal Bar Association (CBA) have been walking out on alternate weeks but were balloted on whether to escalate the industrial action with an indefinite, uninterrupted strike that would start on September 5.

The continuous walkout effectively begins next week because the current alternate weeks are ongoing. This means Friday will be the last working day for barristers before they walk out on Tuesday August 30.

The ballot closed at midnight on Sunday and the result was announced on Monday morning.

Labour leader Sir Keir Starmer said the Government is doing “absolutely nothing” to resolve industrial disputes, including the row with criminal barristers.

“I quite understand, whether it’s barristers or others, why people and how people are struggling to make ends meet,” the former director of public prosecutions told reporters in Walthamstow, east London.

“I want to see the Government step in and actually help resolve these issues; instead of that we’ve got a Government doing absolutely nothing.”

Pressed on whether Labour MPs would be allowed to join picket lines, he told the PA news agency: “My focus of attack is on the Government for not doing anything to resolve these issues.”

According to Ministry of Justice (MoJ) figures, more than 6,000 court hearings have been disrupted a result of the dispute over conditions and Government-set fees for legal aid advocacy work.

Data released under freedom of information laws show that during the first 19 days of industrial action – between June 27 and August 5 – there were 6,235 court cases disrupted, including 1,415 trials, across England and Wales.

CBA vice chairwoman Kirsty Brimelow QC said this is “last-resort action” over a demand for less money than it costs the Government for the courts to sit empty.

She told BBC Breakfast: “The effect (of the strike) will be that the courts continue to sit empty with trials and cases not being heard. It is a last-resort action.

“The remedy is for an injection of money into the backlog of cases, which currently stands at 60,000 cases, that barristers are working on that will cost the Government only £1.1 million per month.

“Currently, it’s costing much more for the courts to sit empty.”

Criminal barristers are due to receive a 15% fee rise from the end of September, meaning they will earn £7,000 more per year.

But there has been anger that the proposed pay rise will not be made effective immediately and will only apply to new cases, not those already sitting in the backlog waiting to be dealt with by courts.

Justice Minister Sarah Dines said: “This is an irresponsible decision that will only see more victims face further delays and distress.

“The escalation of strike action is wholly unjustified considering we are increasing criminal barristers’ fees by 15%, which will see the typical barrister earn around £7,000 more a year.”

The MoJ previously said it had “repeatedly explained” to the CBA that backdating pay would require a “fundamental change” in how fees are paid, adding: “That reform would cost a disproportionate amount of taxpayers’ money and would take longer to implement, meaning barristers would have to wait longer for payment.”