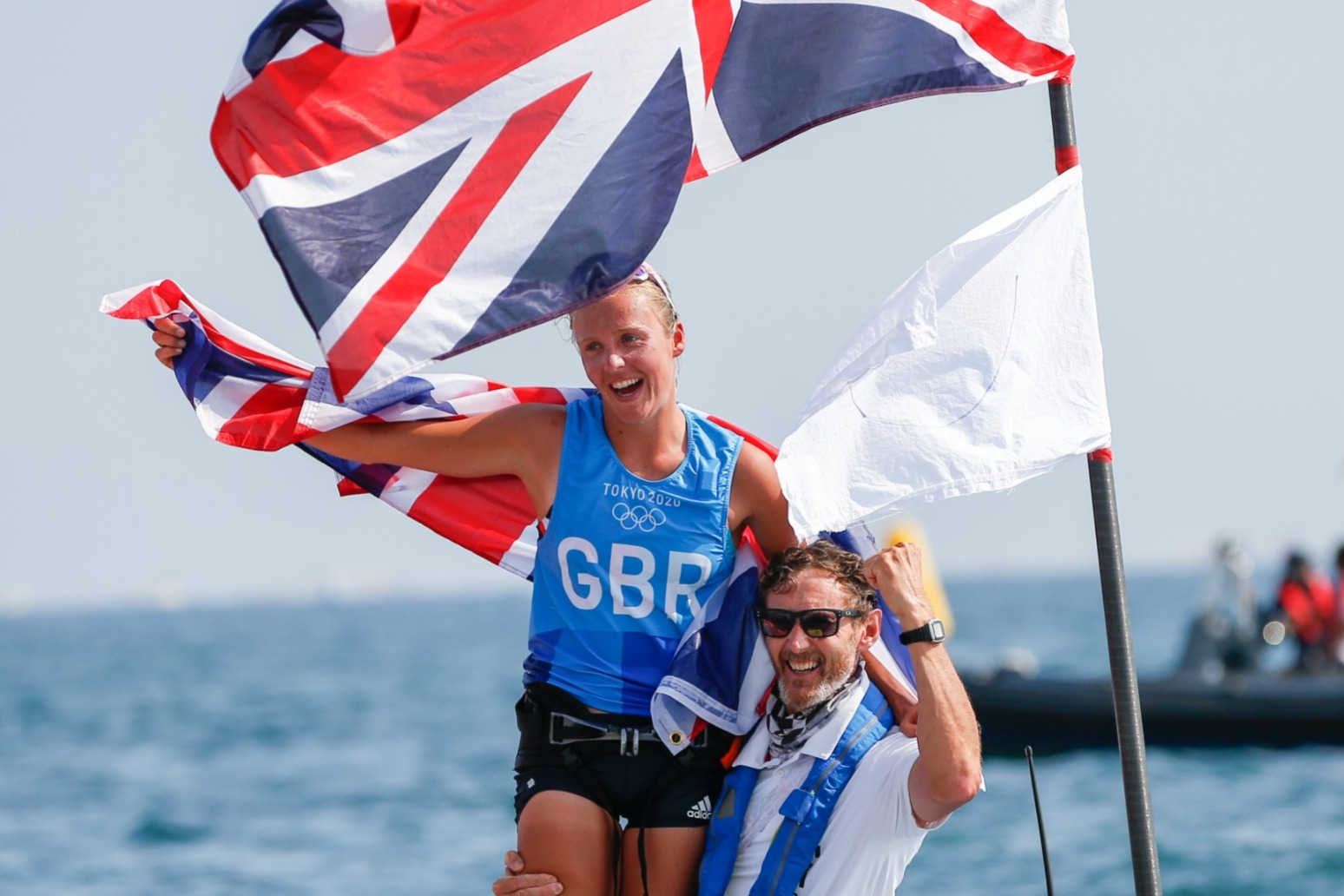 A quarter of a century after her mother came up agonisingly short in her final Olympic regatta, Emma Wilson confirmed a windsurfing bronze medal for Great Britain in Enoshima.

After an impressive campaign in which she only once finished outside the top five in 12 preliminary races, the 22-year-old had the luxury of starting the final double-points race secure in the knowledge that the elusive place on the podium was in the bag.

In gruelling, benign conditions that contrasted sharply with those of most of the qualifying rounds, Wilson ceded the silver medal position to Charline Picon of France, who streaked over the line in first place.

China’s Lu Yunxiu, who knew she would take gold so long as she closely trailed her two medal rivals, carefully tracked Wilson over the line before all three medallists celebrated by leaping into the sea.

Bronze for Wilson represented the first medal for a female British windsurfer since Bryony Shaw took bronze in Beijing in 2008.

And there was particular satisfaction for the Wilson household after her mother, Penny Way, finished in sixth and seventh positions in the same category in the 1992 and 1996 Games respectively.

Way had gone into her two Games burdened by the pressure of being a multiple world champion, while 25 years on Wilson’s particular hang-up was a succession of major fourth place finishes, including at the test event two years ago.

“My mum told me just to enjoy it, because she didn’t,” said Wilson. “She had a lot of pressure as the triple world champion leading into it, and that’s always going to be hard.”

Way’s achievements made significant enough waves for the road to the sailing club in Christchurch to be renamed in her honour, and Wilson laughed off suggestions that she might be afforded a similar honour.

“I wouldn’t mind a road if they want to give me one,” she said.

“I was just the little annoying one coming fourth all the time, so I didn’t feel the pressure. I gave it everything and in the end I came third, but I am still super, super happy.”

Wilson’s medal kicks off the British sailing team’s quest to match or even eclipse the record of six medals they claimed at the 2008 Games in Beijing.

Further preliminary wins on Saturday for Giles Scott in the Finn class and John Gimson and Anna Burnet in Nacra 17 left them at the top of their respective standings, while three more British crews currently sit in second place.

British Sailing’s Olympic performance manager Mark Robinson said: “Getting one away is quite important for the team and as soon as we knew Emma was guaranteed a medal the spirit was pretty powerful.

“Now the trick is can we get the golds. The UK Sport target is four to seven medals but the British sailing team has always been about being the top nation, which generally speaking is the most golds and silvers.

“We’re still in the hunt in six or so but it is getting harder. It used to be that two medals out of 10 made you the top nation, but now you need three to be able to guarantee it.”