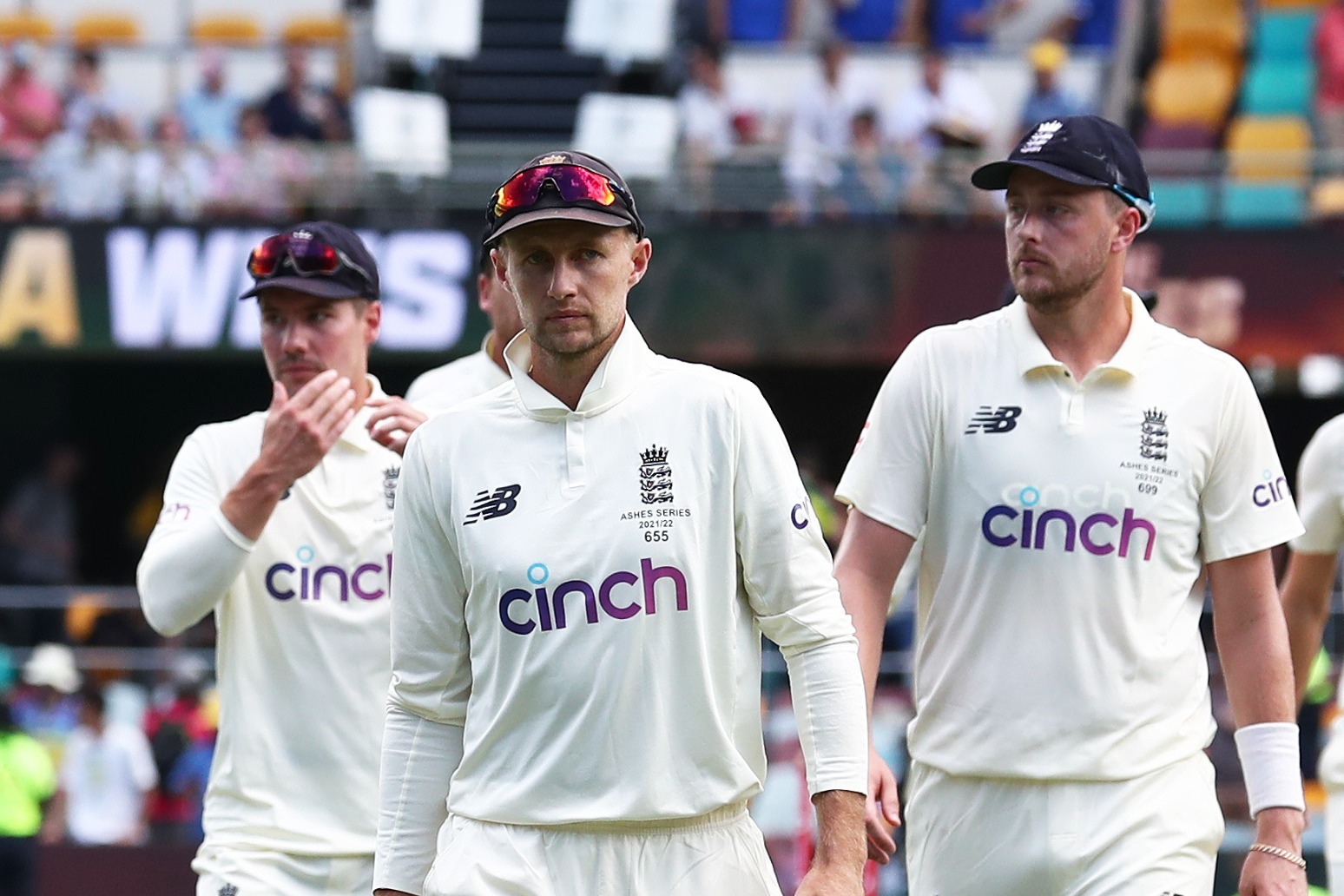 England’s Ashes campaign began with the familiar feeling of defeat at The Gabba as another batting collapse condemned them to a painful nine-wicket loss in the first Test.

The tourists lost eight for 77 on the fourth morning as early optimism turned to outright despair in Australia’s Brisbane stronghold.

Asked to chase a trifling target of 19, they needed just 5.1 overs to chalk up their 1-0 series lead with Ollie Robinson grabbing the consolation wicket of Alex Carey.

England have not won at ‘The Gabbatoir’ since 1986 and this was their seventh heavy defeat in their last nine visits.

Arriving at the ground full of optimism after an unbroken stand of 159 between Joe Root and Dawid Malan on the previous evening, the tourists were steamrollered in a session.

From 220 for two overnight to 297 all out, it was another demoralising passage for a nation with a painful history at the ground.

Root and Malan had batted for almost four hours to slowly turn the tide on day three, chewing through 49 wicketless overs to plant the first few seeds of doubt in a home side who had leveraged a huge first innings lead of 278.

The possibility of twin centuries looked a good bet as the pair resumed but instead Malan added just two runs to his score of 80, lasting 15 minutes before Nathan Lyon finally made him his 400th Test victim.

The 34-year-old has spent most of the year stuck on 399 given Australia’s lack of Test cricket and a wicketless first innings here, letting out 11 months of nervous energy when Malan took a step down the track and nicked a bat-pad chance to silly point.

Only Shane Warne and Glenn McGrath, two of the game’s undisputed greats, have ever reached that landmark before for the Baggy Greens and he celebrated by taking another three to claim figures of four for 91.

Malan’s departure cranked up the pressure on Root, who was already desperate to register a first Ashes century Down Under in his 10th outing on these shores. He went closer than he has before to reach 89, but for the seventh time failed to convert a half-century into three figures.

Given his level of control on Friday, it was an innocuous exit as he felt for a nibbling delivery outside off stump and feathered Cameron Green through to the keeper. Having undermined England’s hard-fought comeback by taking out both set batters in less than half-an-hour, Ollie Pope gifted Australia another.

Cutting his sixth ball underneath his eye-line, far too tight to even imagine the stroke against Lyon, he fed Steve Smith catching practice at slip.

England had lost 14 for three and any semblance of self-control. The pairing of Ben Stokes and Jos Buttler offered a glimmer of hope, but it was a mirage.

They took the deficit down from 44 to 12, with a couple of well-timed shots and some useful edges, but Pat Cummins got Stokes with a beauty that kicked awkwardly off the pitch. Squared up and hopping in the crease, he could only spray a leading edge to gully.

Buttler’s cameo ended on 23 when he wafted one into Carey’s gloves, leaving England seven down and still 10 behind. Ironic cheers greeted the single that confirmed Australia would need to bat again, but Robinson’s botched reverse-sweep off Lyon moved the inevitable conclusion one step further.

Mark Wood got his timing all wrong as Lyon floated one into his off stump and when Chris Woakes feathered Green behind, a once promising innings hit the wall.

Although a much improved effort compared to their day one debacle of 147, it left Australia needing only the tiniest of finishing touches with the bat.

David Warner was nursing bruised ribs and did not emerge, with his stand-in Carey nicking Robinson behind for nine. That was merely window dressing, as Marcus Harris stroked Wood for four to win it off the very next ball.