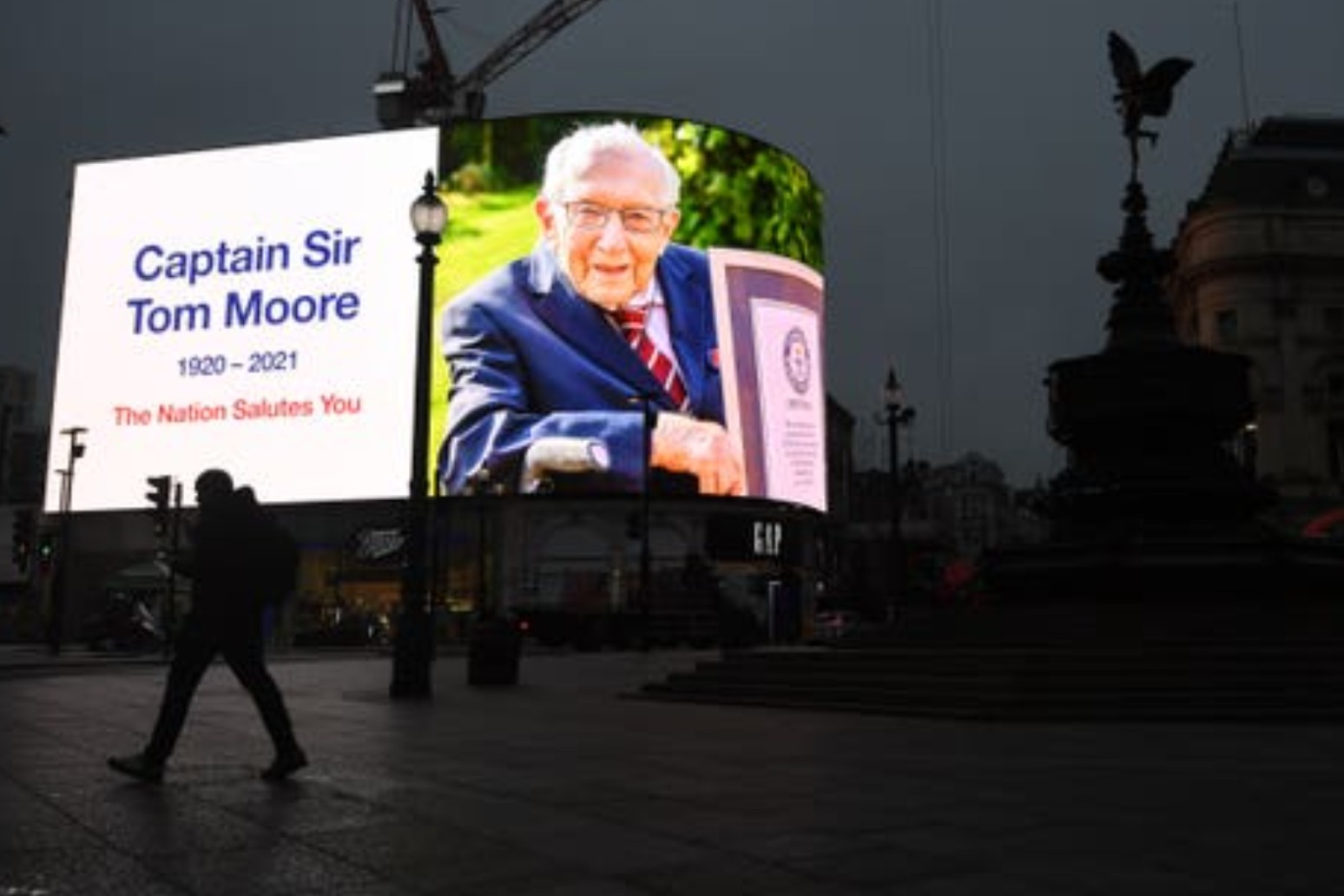 Captain Sir Tom Moore has been hailed for “lifting the spirits of an entire nation” as tributes poured in from across the globe following his death at the age of 100. The charity fundraiser, who captured the hearts of the nation with his fundraising efforts during the first lockdown last year, died in Bedford Hospital on Tuesday morning after testing positive for Covid-19.

His family said the last year of his life was “nothing short of remarkable” and that he had “experienced things he’d only ever dreamed of”.

Prime Minister Boris Johnson described the veteran as “not just a national inspiration but a beacon of hope for the world”.

“In the face of this country’s deepest post-war crisis, he united us all, he cheered us all up, and he embodied the triumph of the human spirit,” he said.

Buckingham Palace said the Queen would be sending a private message of condolence to Sir Tom’s family, adding: “Her thoughts, and those of the royal family, are with them, recognising the inspiration he provided for the whole nation and others across the world.”

The White House also joined the chorus of tributes, saying the US joined the UK “in honouring the memory of Captain Sir Tom Moore, who inspired millions through his life and his actions”.

Sir Tom had been taken to hospital on Sunday after being treated for pneumonia for some time and testing positive for coronavirus last week.

His family praised the care he had received from the NHS and said they had been able to spend time with him in his final hours.

In a statement, his daughters Hannah Ingram-Moore and Lucy Teixeira said: “We are so grateful that we were with him during the last hours of his life; Hannah, Benjie and Georgia by his bedside and Lucy on FaceTime.

“We spent hours chatting to him, reminiscing about our childhood and our wonderful mother. We shared laughter and tears together.”

They added: “Whilst he’d been in so many hearts for just a short time, he was an incredible father and grandfather, and he will stay alive in our hearts forever.”

Singer Michael Ball, who recorded a charity single with Sir Tom that reached number one, said he had spoken to the family and they had told him the veteran “was so proud and so content and he didn’t suffer”.

While presenting The One Show on the BBC on Tuesday night, Ball said: “What keeps them going, I think, is the outpouring of love and respect for everything that Tom achieved over the last year. It has been extraordinary.”

Sir Tom’s fundraising efforts raised more than £32 million for the NHS, walking 100 laps of his garden before his 100th birthday during the first national lockdown in April.

The veteran set out to raise £1,000 from his charity challenge but his efforts struck a chord with the nation, and praise and donations flooded in.

He raised a total of £32.7 million, with donations from 1.5 million supporters, before his fundraising page was closed at midnight following his 100th birthday on April 30.

Sir Tom started his challenge a little over three weeks earlier, and encouraged people to continue to donate to NHS Charities Together.

In acknowledgement of his efforts, he was knighted by the Queen during a unique open-air ceremony at Windsor Castle in summer 2020.

Sir Tom rounded off 2020 with a trip to Barbados with his family, and his fundraising efforts were marked during the new year drone display in London, as his figure appeared over the O2 Arena.

Ellie Orton, chief executive of NHS Charities Together, said Sir Tom “lifted the spirits of an entire nation” and had made “an absolutely lasting legacy for NHS charities and for the NHS throughout the whole of the country”.

Mr Scott, who has raised £5 million for charity over the past 30 years and met Sir Tom, told PA: “Although the amount of money he raised was absolutely mind-boggling, I think that his legacy was really how he touched the souls of everybody – not just in this country but around the world.”

Sir Tom’s fundraising efforts went on to inspire others to take on similar charity challenges, including Dabirul Islam Choudhury, who raised more than £420,000 by walking 970 laps of his communal garden while fasting during the Islamic holy month of Ramadan.

Mr Choudhury said: “He is our real hero and we will miss him terribly.”

The flag above 10 Downing Street was flown at half-mast on Tuesday evening, while landmarks including the London Eye, Wembley Stadium and Blackpool Tower were lit up and a tribute was broadcast on the billboard lights at Piccadilly Circus.

Floral tributes were laid at the gate to his family home in the village of Marston Moretaine in Bedfordshire, as neighbours described him as “a legend, inspiring, a hero”.