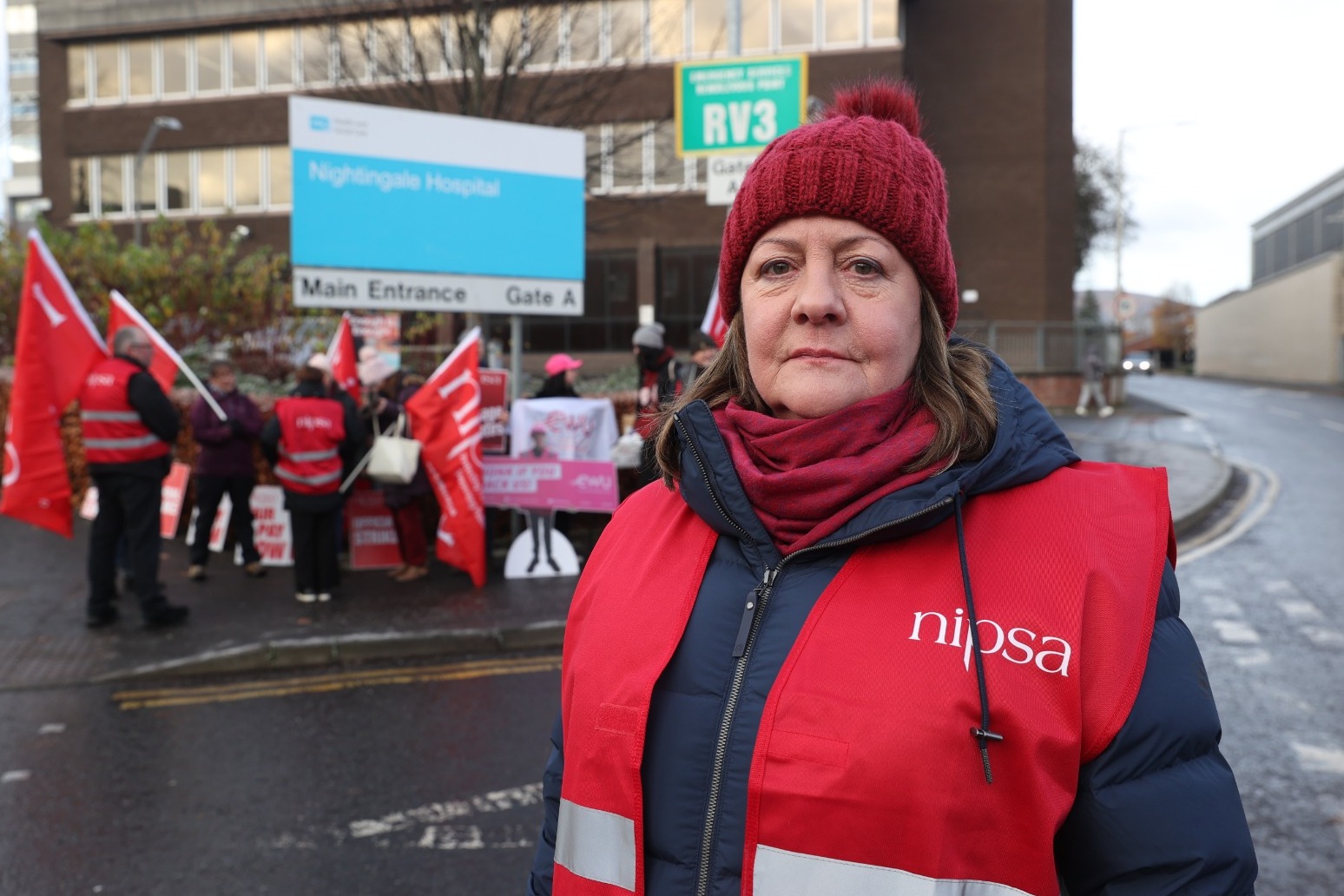 Health workers in Northern Ireland vowed to continue the fight for better pay and conditions as they took part in a 24 hour strike.

Members of three of Northern Ireland’s largest unions – Unison, Nipsa and GMB – were on the picket lines on Monday at hospitals and other health service facilities across the region.

Contingency arrangements are in place to ensure emergency care continues despite the action.

Later this week, nurses in the Royal College of Nursing will join RCN colleagues across the UK in Thursday’s nationwide strike.

As Monday’s strike got under way, the chief executives of Northern Ireland’s health trusts issued a joint statement hailing the contribution of staff during the pandemic and insisting they should be “properly rewarded for their work”.

Unions said the increase was not enough and insisted the strike action would continue.

The majority of health workers are to receive at least an additional £1,400 in pay while doctors and dentists will be given a 4.5% rise.

The announcement was always unlikely to have affected the industrial action planned by health workers, as NHS colleagues in Great Britain have voted to strike having already received the 2022/23 rises.

The lack of a devolved executive at Stormont had prevented the awards being made in Northern Ireland before the UK Government intervened last month to pass a budget for Stormont and hand civil servants extra powers.

“It is below inflation and it means that they are going to be driven further into poverty.

“So, the strike today is about decent wages, decent terms and conditions for the workers and also safe staffing levels to keep the health service alive and well. We’re here to fight and we will fight until we win.”

At the picket line at the Royal Victoria Hospital in Belfast, Margaret McKee, a joint branch secretary with Unison, said members “need and deserve” a better pay rise.

Ms McKee issued a blunt message to Stormont politicians amid the current powersharing impasse in Belfast.

“We need our MLAs to get themselves back into Stormont and to start sorting out our public services,” she told PA.

“So, there’s no incentive for nurses to stay or anyone to stay to work in the NHS because, let’s face it, the pay isn’t good.”

Peter Macklin, a full-time GMB official, joined members of his union protesting at the City Hospital.

“These guys have worked through the pandemic and their pay has been consistently cut over the past number of years,” he said.

“They are trying to get something that’s reflective of the work they do and the responsibilities they have.”

In their joint statement, the chief executives of Northern Ireland’s heath trusts acknowledged the region’s health and social care system was facing a “prolonged period of industrial action”.

“Inevitably there will be an impact on services,” they said.

“However, we have contingency plans in place and are working closely with the trade unions to protect our critical services and to mitigate disruption, as far as possible.

“Our staff are not just the backbone of health and care services, they are our colleagues and friends.

“Working in the Health and Social Care System is a way of life.

“The HSC is a family because of the incredible work that takes place on a daily basis, often including additional service over and above normal duties. We obviously want to see all staff properly rewarded for their work. They have been impacted heavily by cost of living increases and escalating pressures on Health and Social Care services. We must also never forget what they did for us all during the pandemic.

“Its central plea remains just as relevant today and we repeat it now – ‘We are all aware that the Health and Social Care System in Northern Ireland requires a long-term funding settlement that addresses service, workforce and pay pressures in a sustainable manner. We have been struggling with a system where funding has been made available on a yearly basis, which makes it impossible to plan for the long term. Demand is increasing and will continue to do so, meaning that the current system is simply unsustainable.’”