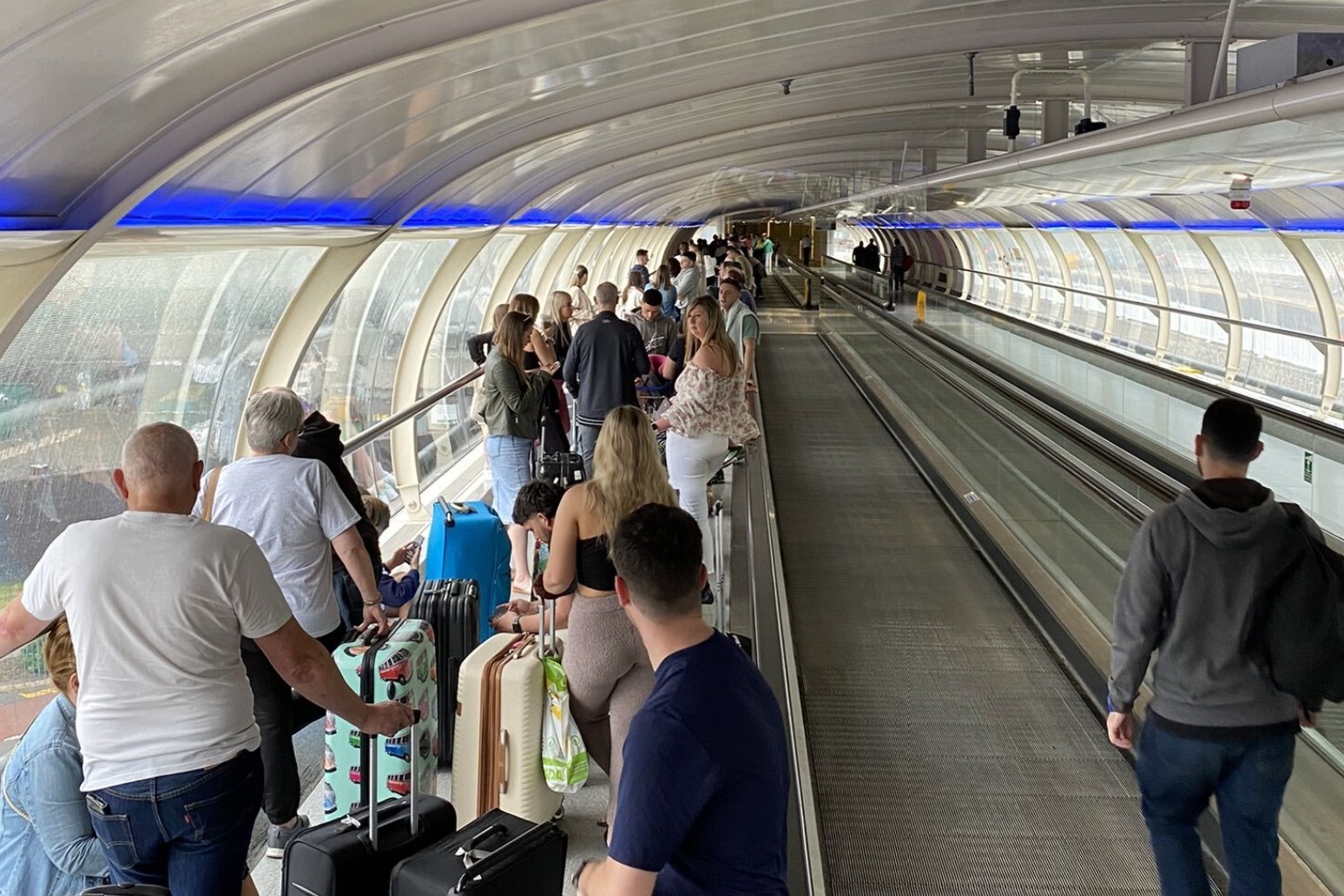 Airline passengers faced cancelled flights and long queues at UK airports on Monday as millions of people embarked on half-term getaways or trips to coincide with the Platinum Jubilee weekend.

Airports are struggling to cope with the demand for travel amid staff shortages.

Meanwhile easyJet and Tui have cancelled a number of flights this week in an attempt to boost reliability.

Manchester Airport has been one of the worst affected, with passengers reporting four-hour queues on Monday.

Chris Price, a battlefield guide, was travelling with his family to the Dominican Republic.

He told the PA news agency: “Tui’s lack of communication with passengers is shocking. Nobody (was) there to assist or help if needed, and now (the) flight (is) delayed.

“It spoils an exciting time, especially for children … my son is pulling his hair out.

“(The) sad part is it’s entirely avoidable if Tui communicated.”

Tui told passengers on social media it is “doing everything to minimise disruption to our flying schedule”, adding that “the majority of our flights are operating with minimal disruption”.

Manchester Airport said in a statement that airlines and their ground handlers are experiencing “challenges” which is “leading to delays at check-in and baggage reclaim for some passengers”.

It added: “This is not the experience we want passengers to have at Manchester Airport and we are sorry to hear customers have faced disruption.”

Passengers departing on flights from Bristol Airport were forced to wait outside in a long line which reached a car park.

Road transport firm MET Executive Travel, which posted a video of the queue on social media, wrote: “Here are the queues of passengers trying to get into the airport this morning stretching out as far as the drop off zone, worst we’ve ever seen.”

In a statement, Bristol Airport said: “We appreciate the frustration experienced by customers early this morning and apologise for the queues at security, which reached 90 minutes for a short period.

“Over 80% of our customers experience less than a 20-minute security queue; only during peak times we extend beyond this.”

The situation could worsen in the coming days with people jetting off once the four-day bank holiday period begins on Thursday.

More than 10,000 flights are scheduled to depart between Thursday and Sunday, according to aviation data firm Cirium.

That is a three-fold increase on the same period last year, when the UK’s coronavirus travel restrictions remained in place.

Meanwhile the RAC estimated that 19.5 million leisure trips by road will take place between Wednesday and Sunday.

A survey of 1,460 drivers’ travel plans indicated that Friday is likely to be the most congested day on the roads as day-trippers combine with families returning home from half-term breaks.

Traffic information supplier Inrix advised drivers to set off either before 6am or after 3pm to avoid the worst of the traffic.

The M25 anticlockwise from Junction 17 at Maple Cross Interchange, Hertfordshire to Junction 12 at Thorpe Interchange, Surrey has been highlighted as a likely congestion hotspot.

Another is the A303 running past Stonehenge, Wiltshire, which is a popular route for holidaymakers travelling towards the South West.

Some 37% of respondents to a separate RAC poll said they will not be driving long distances over the weekend.

Of those people, 11% attributed this to high fuel prices.