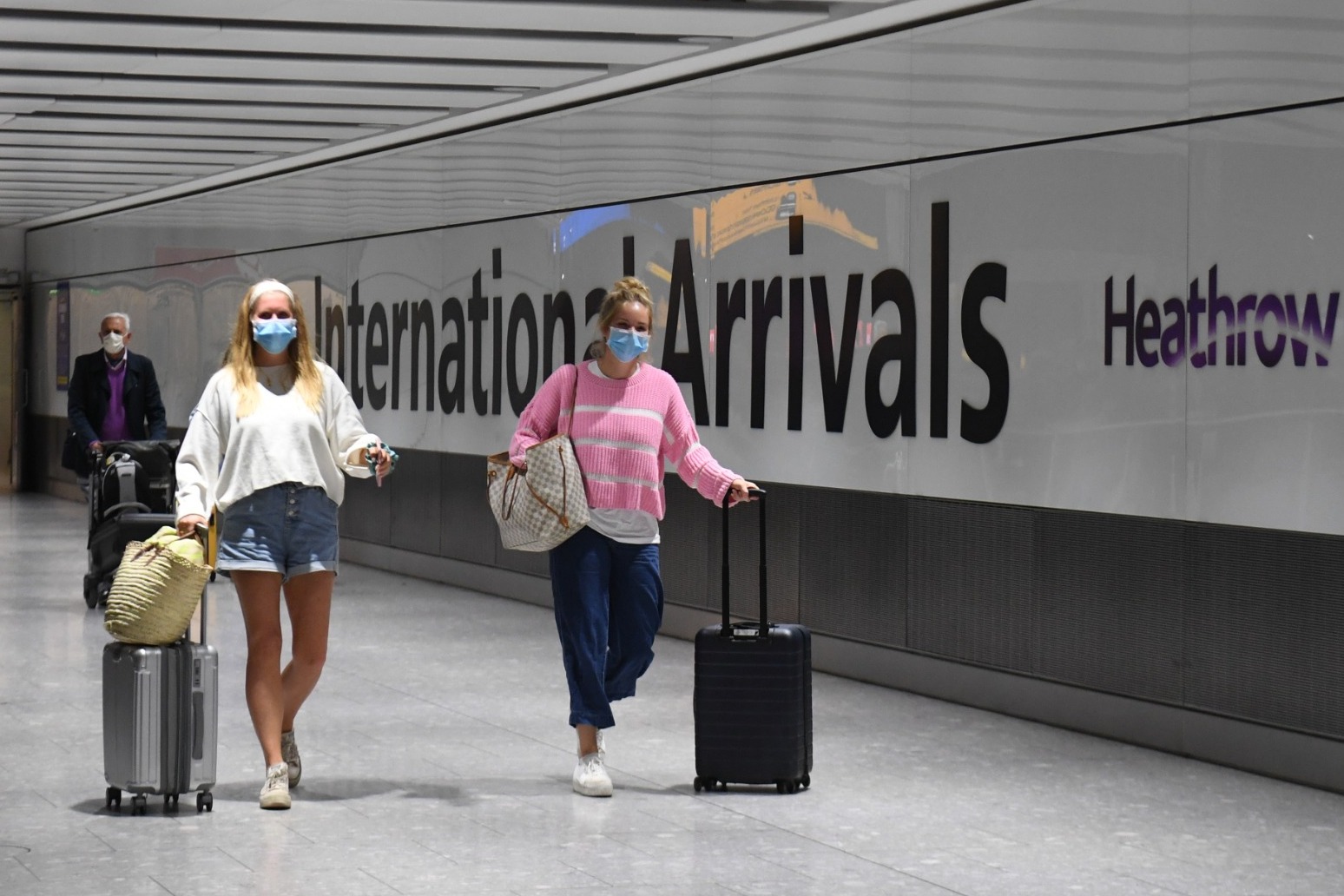 Holidaymakers scrambled to get home to beat new quarantine measures as further restrictions were implemented in the north of England.

Tougher measures for areas of Greater Manchester and Lancashire came into force at midnight, with people now advised not to socialise with anyone outside their household, and funerals and weddings limited to 20 people.

The change comes as a senior medical expert suggested the UK may need to increase testing from current levels of 150,000 per day to up to 10 million a day.

The Government said it was concerned that a rise in people testing positive for coronavirus in Oldham, Blackburn and Pendle was due to “social mixing” particularly among 20 to 39-year-olds.

From 4am on Saturday travellers arriving to the UK from Croatia have to self-isolate for 14 days after a spike in coronavirus cases led to the Government removing Croatia from its safe travel list.

At London Heathrow Airport’s Terminal 5 on Friday evening, British Airways flights arriving from the Croatian city of Dubrovnik and the capital Zagreb were among the last to arrive in the UK before the quarantine deadline.

Thomas Maguire, 63, a sales manager from Northern Ireland, was due to fly back on Sunday, but returned to beat the quarantine deadline due to the impact it would have on his family.

He branded the rule changes as a “complete shambles”, saying he had spent nearly £400 on his flight which he hoped to recoup through insurance.

“Why they decided to do it the way they have done it, it’s not in support of any scientific evidence… that I’m safer today than I would be tomorrow,” he said.

Meanwhile, Imperial College London’s Professor Ara Darzi said regular home testing could be the UK’s “best hope” against the pandemic and warned the UK may need to increase its current testing to “one million or even ten million a day”.

The co-director of the college’s Institute of Global Health Innovation is overseeing a study of home testing involving 100,000 people and wrote in The Daily Telegraph: “Mass testing is not merely our best defence against the spread of the virus, it is also key to giving the country the confidence it urgently needs.

“And unlike a vaccine, which is still many months away, simple, easy and cheap tests, some based on saliva, with results in as little as 10 minutes, are already out there.”

The recommendation comes as people in Oldham in Greater Manchester, as well as Pendle and Blackburn in Lancashire were told not to socialise with anyone outside their household from midnight on Saturday.

They were also advised to avoid using public transport unless it is essential.

The number of people attending weddings, civil partnerships and funerals should be no more than 20 people, made up of household members and close family only, the Department of Health and Social Care (DHSC) said.

Friday’s announcement stopped short of a localised lockdown, where businesses would be closed, which Oldham council’s leader Sean Fielding had earlier this week warned could be “catastrophic” for the area.

He tweeted: “We have reached agreement with the Government that Oldham will not go in to full local economic lockdown.

“Some additional restrictions will be introduced, however.”

The Government said people can still shop and go to work and that schools and other childcare settings will open as normal under the new restrictions.

Also on Friday it was announced that Birmingham is being added to a watch list as an “area of enhanced support” and Northampton becomes an “area of intervention”.

West Midlands Mayor Andy Street said “some people have not been strict enough” with coronavirus measures and the DHSC said he would be meeting Health Secretary Matt Hancock and local council leaders on Friday to discuss “urgent next steps”.

Meanwhile the Greencore sandwich factory in Northampton closed from Friday, with staff and members of their households having to isolate for 14 days.

It was announced last week that more than 200 people had tested positive for Covid-19 after an outbreak linked to the factory.

The Department of Health said Mr Hancock will bring in regulations “to ensure that this self-isolation period is legally enforced” and warned that anyone who does not abide by the rules without a reasonable excuse could be fined.

Restrictions in Wigan, Rossendale and Darwen have been lifted, the department said, bringing them into line with the rest of England.

Figures published on Friday show there were 71.7 new cases per 100,000 people in Oldham in the seven days to August 18, down from 112.2 over the previous seven days.

Pendle, which is in second place behind Oldham, has a rate of 67.3, down from 108.6, while Blackburn with Darwen is in third place.

DHSC said coronavirus cases are “rising quickly” in Birmingham, with 30.2 cases per 100,000 and more than half of cases in the last week in people aged 18-34.

The new restrictions will not apply in the Darwen area of the Blackburn with Darwen upper tier local authority area, parts of Pendle, in Rossendale or in Wigan.

But they do come on top of the existing ban on indoor gatherings of more than two households in place across parts of Lancashire, Greater Manchester and West Yorkshire.