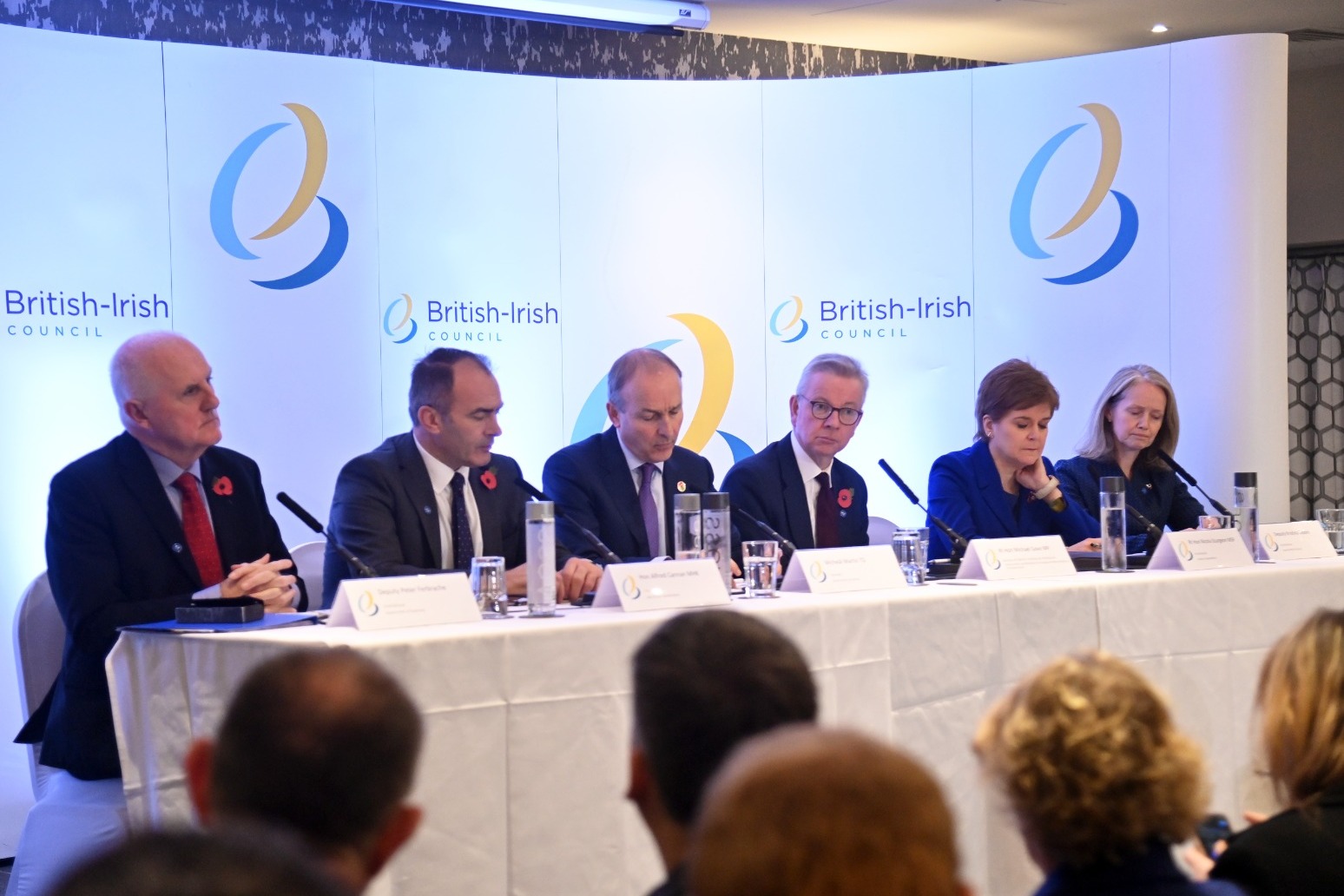 Taoiseach Micheal Martin said Anglo-Irish relations have significantly improved of late but he said he did not underestimate the challenge of finding consensus between the EU and UK on the contentious Irish Sea trading arrangements.

Speaking at the close of the British-Irish Council summit in Blackpool, Mr Martin reiterated his view that a “window of opportunity” now existed to secure a deal and, in turn, create the circumstances to restore powersharing in Northern Ireland.

The DUP is currently boycotting the devolved institutions in protest at the protocol and the party insists it will not countenance a return to a Stormont executive until its economic barriers on trade between Great Britain and Northern Ireland are removed.

Mr Sunak held talks with Mr Martin on Thursday evening when he became the first prime minister in 15 years to attend the summit.

Cabinet minister Michael Gove was the most senior Government representative in attendance on Friday for a plenary session that brought together leaders from the UK’s devolved regions, Ireland and the Crown dependencies.

Northern Ireland had no political representation at the event due to the ongoing impasse over the protocol at Stormont.

At a press conference afterwards, Mr Martin expressed hope that an agreement can be reached.

“I think the relationship, certainly between the Prime Minister and I and both governments, has improved very significantly,” he said.

“And I think we’re both of a mind to – with our colleagues in the European Union – to get this issue resolved in a harmonious way.

“And I think the meeting over these two days has again reinforced the importance of all of us working together on shared challenges and shared issues.

“So therefore, the need to really get this issue resolved is important because we have other bigger issues also. Really significant economic challenges coming our way, we have the war in Ukraine.”

Mr Martin added: “I was struck by the Prime Minister’s pragmatic approach, understanding where the European Union are coming from, but also he then seeking, obviously, that the EU understands where the United Kingdom is coming from.

The Government has vowed to secure changes to the protocol, either by a negotiated compromise with the EU or through proposed unilateral domestic legislation, the Northern Ireland Protocol Bill, which would empower ministers to scrap the arrangements without the approval of Brussels.

The European Commission has said the latter approach would breach the terms of an international treaty and potentially prompt retaliatory action.

Mr Gove, the UK’s intergovernmental relations minister, said he was “optimistic” about finding a resolution to the row over post-Brexit arrangements but played down any EU or Irish hopes that the controversial Northern Ireland Protocol Bill’s legislative passage would be paused.

“The programme of legislation in the House of Commons is something that is above my paygrade. I’m not aware of any plans to pause consideration of the Protocol Bill,” he said.

“The discussions that the Prime Minister had with all colleagues here about the importance of finding a safe landing zone I think were conducted in a cordial and constructive fashion and as the Northern Ireland Secretary said, he is a glass-half-full man so we remain optimistic about the opportunities of reaching a resolution.”

Mr Gove said he hoped Northern Ireland politicians will be in a position to be able to attend the next summit in the summer.

“The next British-Irish Council meeting will be in Jersey in June or July,” he said.

“I sincerely hope that we have ministers from the Northern Ireland executive there then, the sooner the better.”

Earlier this week, the Government extended a deadline for calling an election in Northern Ireland and cut the pay of Stormont Assembly members.

Existing legislation gave the Stormont parties almost six months to form a ministerial executive following the last election in May, which saw Sinn Fein emerge as the largest party for the first time.

The deadline to establish a new executive lapsed on October 28, at which point the Government assumed a legal responsibility to hold a fresh poll within 12 weeks – January 19.

Northern Ireland Secretary Chris Heaton-Harris has extended the deadline for parties to form an executive by six weeks to December 8, with the option of a further six-week extension.

With the Stormont deadlock intrinsically linked to the dispute over the protocol, the Government move is designed to provide more space for a deal to be struck between Brussels and London.

The 12-week clock for calling an election will now come into effect either on December 8 – meaning a poll would have to be held by March 2 – or six weeks later on January 19, meaning an election would need to take place by April 13 at the latest.

Mr Heaton-Harris is also cutting the pay of MLAs to reflect the fact they are not currently doing their job as legislators.

Salaries will be reduced by 27.5% – a move in line with a cut imposed by the Government during the last powersharing impasse in Northern Ireland.