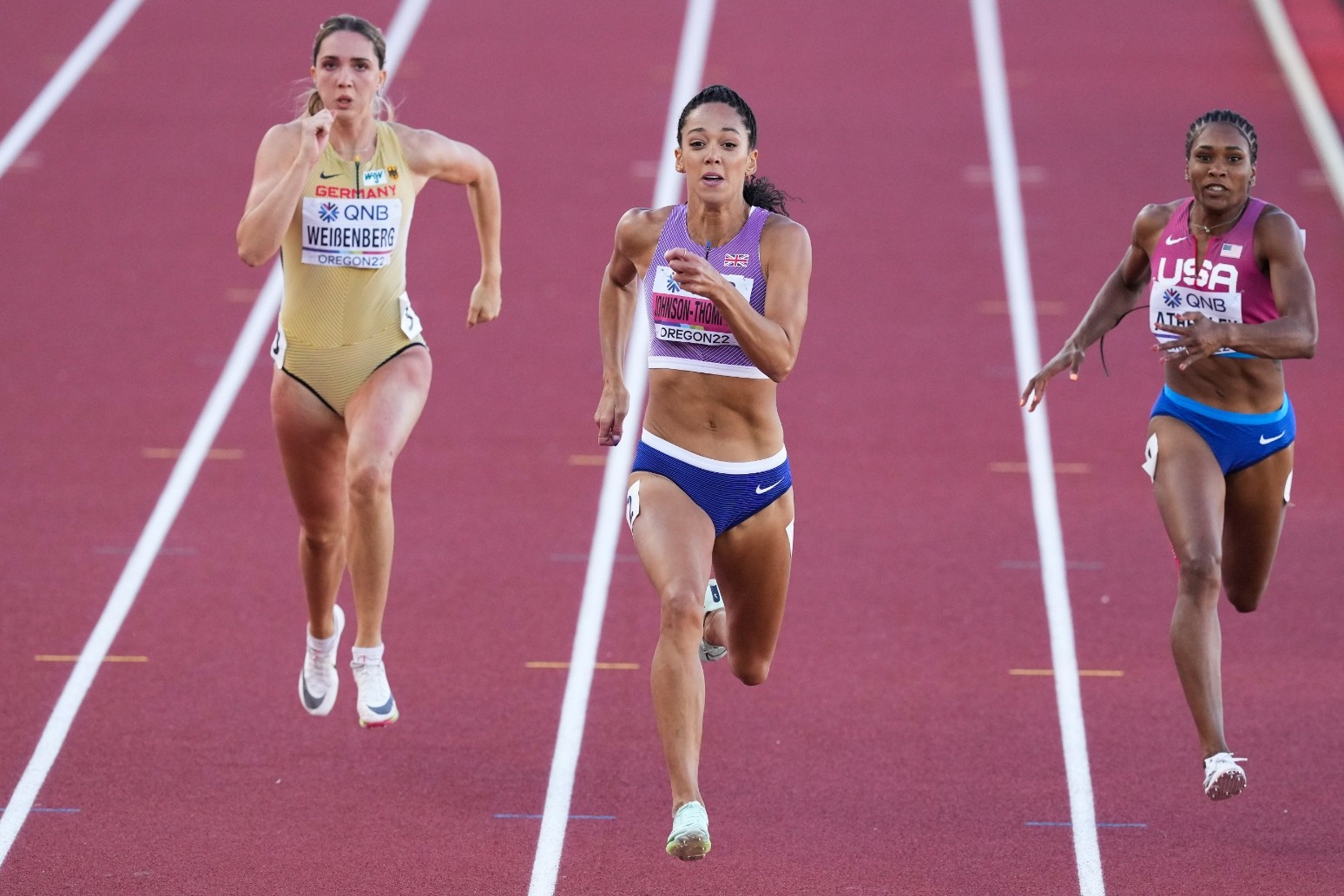 Defending champion Katarina Johnson-Thompson revealed her frustration at failing to challenge for medals after day one of the heptathlon.

he 29-year-old sits sixth with little hope of retaining her title at the World Championships in Eugene.

The 2019 winner trails leader and Olympic champion Nafi Thiam by 273 points and lies 193 points adrift of the podium places.

Injuries and a late change of coach have left Johnson-Thompson, who has 3798 points, playing catch-up and disappointed.

She said: “It’s not nice, it’s not a place where I want to be at a Championships, especially as I know I can do so much better historically and I think I could have done better with a few tweaks. I’m proud of just being here.

“I got back into really hard training in the last six weeks but unfortunately I haven’t come out of the other side in the place I wanted to be.

“I’m still here, I’m still fighting and this is part of what I’m trying to do at this championships, be here, fight and be competitive.”

But Johnson-Thompson insists she trusts her body after battling back from a ruptured Achilles in December 2020 and a calf injury which forced her to pull out after the 200m at last year’s Olympics.

She said: “Yeah, lining up on the bend and being in a tight lane in lane two and pushing off on the right leg, you’re worried the pictures from Tokyo will repeat but that’s a mental process I have to get through. It’s hard.”

She has only managed one full heptathlon since winning the world crown in Doha three years ago, the Gotzis hypo-meeting in May, following injury.

There was little expectation the Commonwealth Games champion would have been able to defend her title in Eugene.

Johnson-Thompson opened with 13.54 seconds – way down on her 13.09 personal best from Doha – to finish fifth in her 100m hurdles heat.

Thiam’s huge personal best of 13.21 seconds, in one of her weakest disciplines, was ominous.

But she was unable to clear 1.86m – compared to Thiam’s 1.95m – and was clearly upset with her performance.

The shot put, one of her weakest events, offered little chance of redemption and she threw a best of 12.92m.

In the evening, a 23.62 second run in the 200m saw her finish second in her heat but lose ground on the top three.

Elsewhere, Josh Zeller was fifth in the 110m hurdle final, which was won by the USA’s Grant Holloway. Andrew Pozzi and Dave King failed to qualify from the semi-final.

Josh Kerr and Jake Wightman reached the 1500m final but there was no place for Neil Gourley, who had recovered from testing positive for Covid last week.

In the morning session, Matt Hudson-Smith cruised through his 400m heat to win in 45.49 seconds.

The European champion is joined in the semi-final by Alex Haydock-Wilson after he came third in the opening heat in 45.62 seconds.

Hudson-Smith said: “It was quite easy, just executed and went for the victory. The work’s been done. You do what you’ve put in.

“I can only control my lane, everyone else is irrelevant really.

“My coach has told me I’ve done the work, just go out and show it. He asked me before I went to the track ‘do you belong here’? It was quite explicit but I said ‘I’ve waited three years for this, so I’m ready’.”

In the women’s 400m heats, Victoria Ohuruogu and Ama Pipi qualified for the semi-final automatically with Nicole Yeargin also progressing with a season’s best of 51.17 seconds.