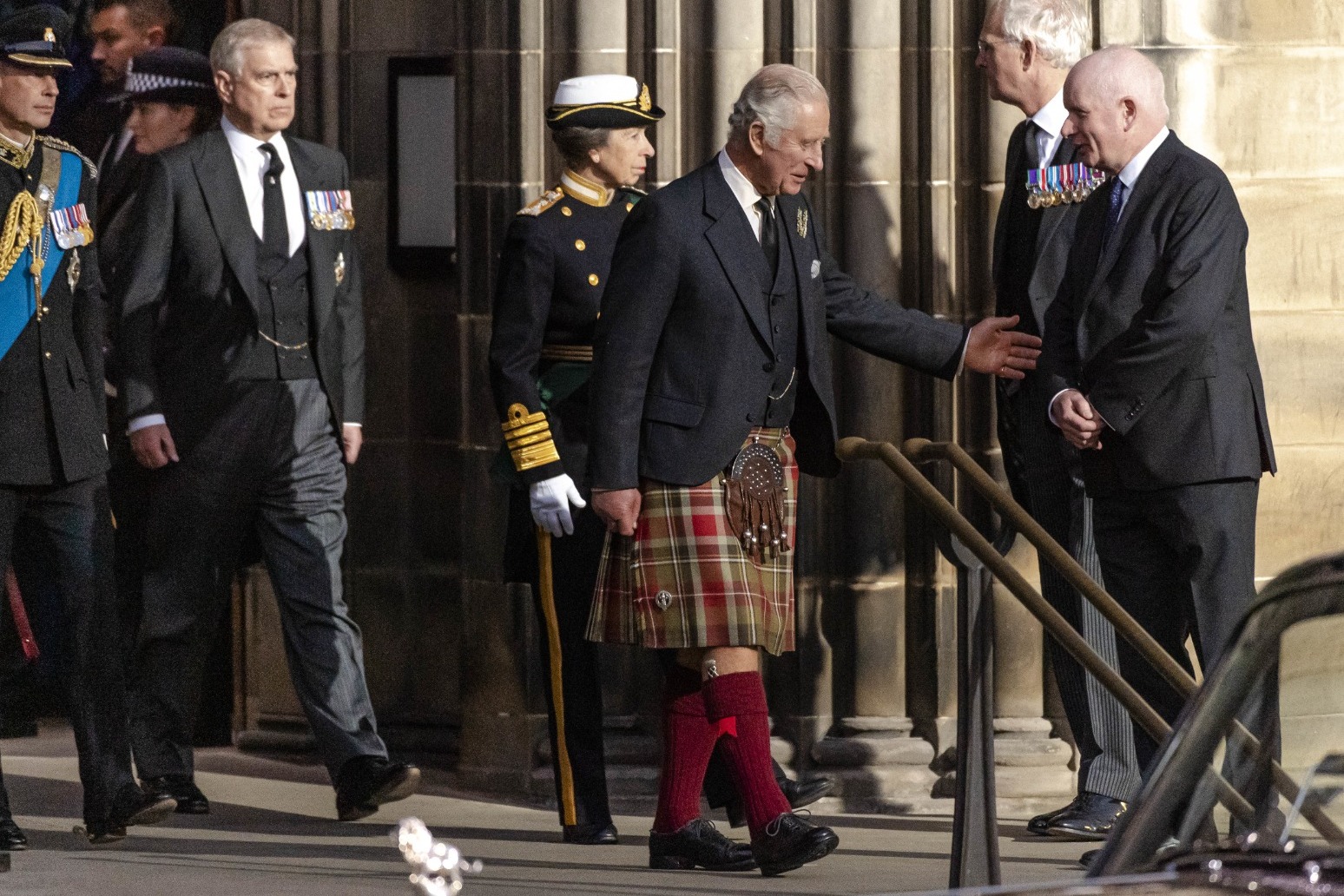 A historic tartan worn by the King as he stood vigil by the Queen’s coffin was a “sign of respect” and love for Scotland, an expert has said.

A historic tartan worn by the King as he stood vigil by the Queen’s coffin was a “sign of respect” and love for Scotland, an expert has said.

The monarch wore the Prince Charles Edward Stewart – or Stuart – tartan on his visit to the Scottish Parliament and St Giles’ Cathedral in Edinburgh on Monday.

Charles was visiting Scotland as his first engagement in the country as King following the death of the Queen last week, aged 96.

He visited the Palace of Holyroodhouse for a ceremony of the keys before joining the procession of his mother’s coffin up the Royal Mile to St Giles’ Cathedral, where it lay in rest for 24 hours.

The monarch then donned his beloved tartan to pay tribute to his mother at the Scottish Parliament before attending the vigil at the ancient cathedral.

The sett is a variation of the Royal Stewart tartan – a favourite of Elizabeth II – and dates back to the early 19th century.

The defining difference to the Royal Stewart is the reduced red squares.

Its origins date back to the House of Stewart, according to the Scottish Register of Tartans (SRT).

The ancient design was first worn by King George IV on his visit north of the border in 1822 – the first from a reigning monarch in almost two centuries.

Later in the 1800s, it was warn as the regimental tartan by the 72nd Duke of Albany’s Own, the SRT said.

Kiltmaker Gordon Nicolson – whose Royal Mile store has made University of Edinburgh and the John Muir Way tartans – said the King’s choice of tartan was in homage to his love for the country.

Charles, a keen historian is a patrol of the Scottish Tartan Authority and is known for donning many kilts, including the Balmoral Tartan and the Stewart Hunting.

Mr Nicolson said: “The King obviously had a couple of outfits on yesterday but when he went to parliament and St Giles’ he chose to wear his tartan kilt outfit which shows the respect he has got when he comes up to Scotland.

“He does wear many different kilts when he is out and about and if he gets a few good comments on it then that will maybe knock it up the batting order for what he will choose to wear.

“The King choosing to wear a tartan that is more accessible to other people may be a statement.”

While admirers of the King’s traditional Scottish dress may wish to wear their own version of the Prince Charles Edward Stewart – its rareness means it has to be specially woven due to its unusual patterns.

But Mr Nicolson said some suppliers may choose to make their own if its popularity increases due to the monarch’s display.

The Balmoral Tartan, in contrast, is restricted to the royal family and piper to the sovereign.

Mr Nicolson added: “Charles is an icon and a kilt wearer. I think we will possibly get people coming in to choose it because it is a nice tartan.

“People would have to request it to be woven if they wanted to wear it.

“But on the back of the King wearing it, it could become popular and some mills might actually weave it and keep it in stock.”