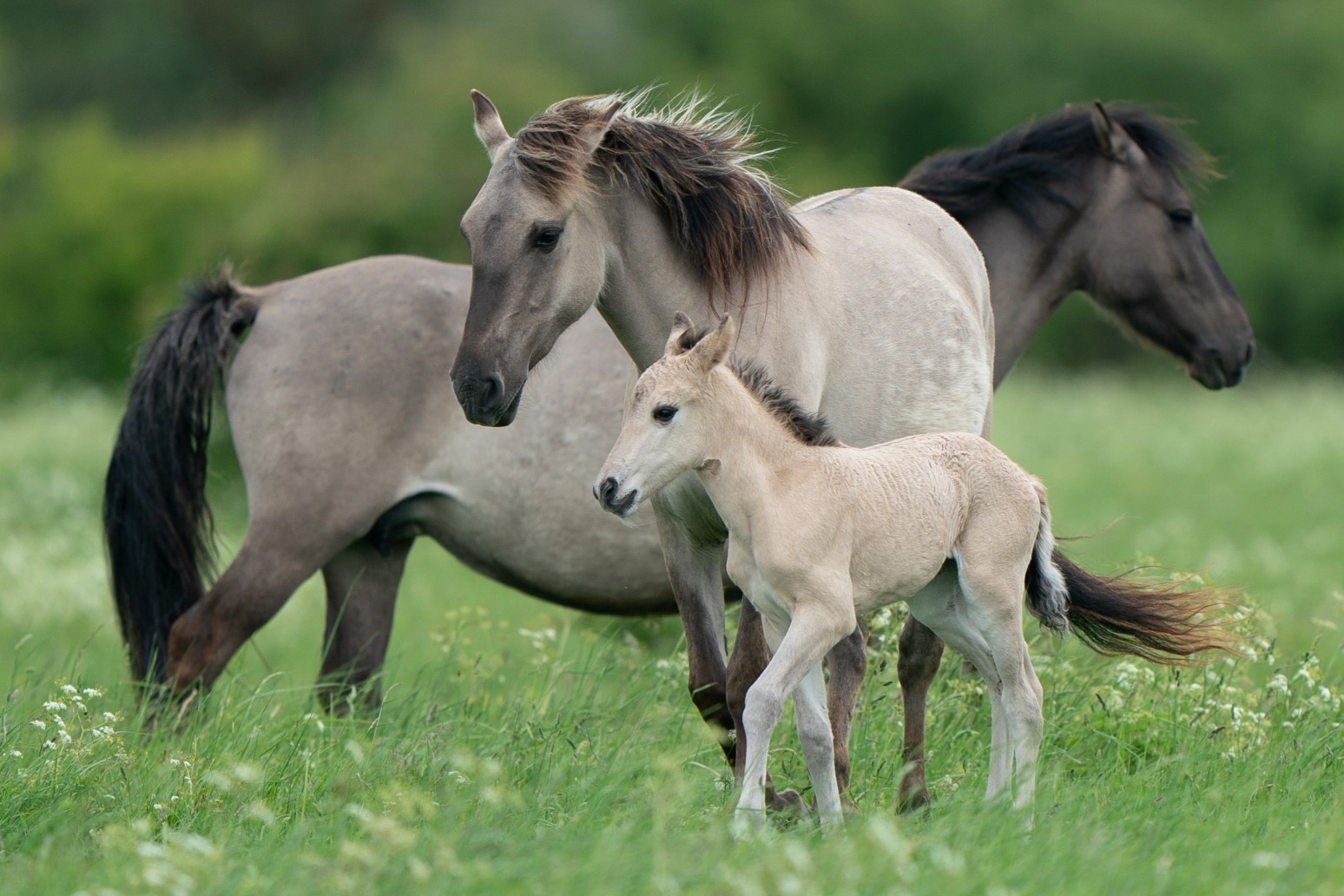 A dozen Konik pony foals are finding their feet at a nature reserve where their grazing will help create habitats for other species.

The animals, a hardy breed originating from Poland, leave water-filled hoof prints and piles of dung as they go which can help attract new species of flora and fauna to the lowland landscape of the National Trust’s Wicken Fen reserve in Cambridgeshire.

The ponies are distinctive as stallions can sometimes be seen rearing up on their hind legs and sparring with each other in a display of dominance during the foaling season.

Rangers at the reserve have named the foals after horses in film and TV.

The first 10 have been named Victor, Ginger, Rigel, Oliver, Argo, Pilgrim, Sprout, Sylvester, Pie and Beric, with the two most recently born yet to be named.

More than 200 foals have been born on the reserve since breeding started in 2003.

Also helping to manage vegetation at the reserve are four baby Highland cows, the latest of which was born on Tuesday – the 100th to be born at Wicken Fen since breeding started in 2005.

Rangers are naming the calves after areas on the shipping forecast, with the first two females called Malin and Bailey, and two more of the Scottish long-haired cattle breed yet to be named.

A National Trust spokesman said it was not possible to manage the expanding reserve using traditional methods of man and machinery, and so the animals were brought in to help.

“The animals help keep the landscape open and help wetland and grassland plants to become established,” the spokesman said.

“The hardiness of the breeds means they are more than capable of withstanding the rigours of life on the fen throughout the year and thrive on the available forage.

“The Konik pony is a hardy breed originating from eastern Europe and ideally suited to our type of lowland landscape.

“The Highland cattle originate from the Highlands and Islands of Scotland, they are tough and robust with a placid nature.”

The effects the animals have on developing vegetation vary according to their feeding behaviour.

“Some areas will be grazed more heavily, whilst other areas may escape allowing the vegetation to grow taller,” the National Trust said.

“The animals also create other habitats such as well trodden paths through areas of long grass, dusty hollows where they roll, water-filled hoof prints and piles of dung.

“The animals act as catalysts to help attract new species of flora and fauna to the fen.

“Horses tend to snip off selected plants with their incisors, creating a mosaic of short cropped ‘lawns’.

“Cattle largely graze by pulling or tearing at vegetation, leaving a landscape with a more ‘tussocky’ appearance.

“With these different grazing characteristics, the breeds are the perfect engineers for the long-term management of vegetation across new areas of the nature reserve,” the spokesman added.

Wicken Fen is the National Trust’s oldest nature reserve and one of Europe’s most important wetlands, supporting an abundance of wildlife.

There are more than 9,000 species, including an array of plants, birds and dragonflies.