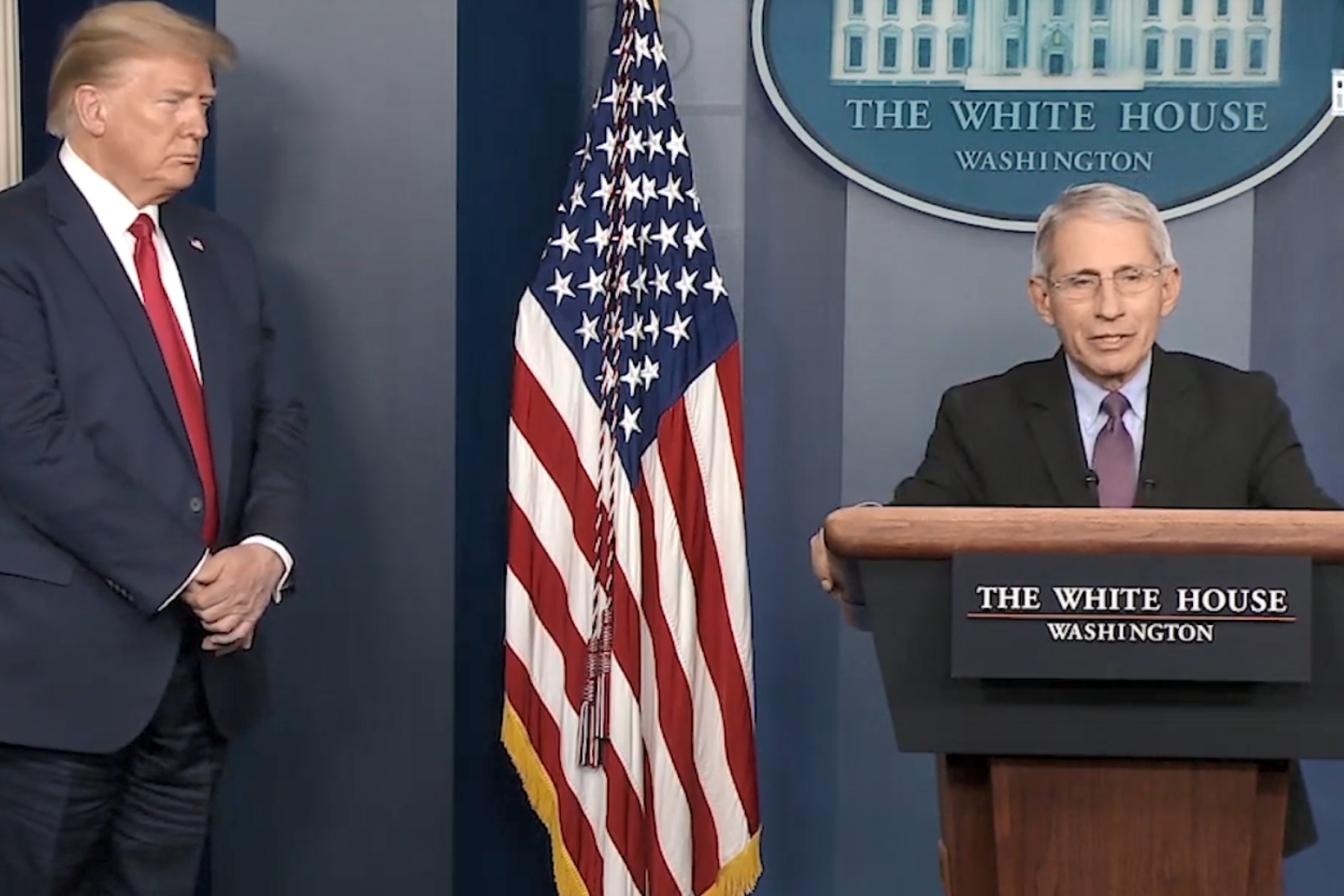 The US administration’s leading infectious disease expert has condemned Donald’s Trump campaign for including him in the president’s re-election bid.

With coronavirus dominating the national debate, the Trump campaign released an ad featuring Dr Anthony Fauci apparently praising the president’s leadership, but the director of the National Institute of Allergy and Infectious Diseases responded: “The comments attributed to me without my permission in the GOP campaign ad were taken out of context.”

He insisted he was talking broadly about public health officials’ response to the pandemic, adding: “In my five decades of public service, I have never publicly endorsed political candidates.”

Tim Murtaugh, Trump campaign communications director, responded by saying “these are Dr Fauci’s own words” and claimed they were praising the administration’s response.

The dispute came as Mr Trump declared he was ready to return to the campaign trail despite unanswered questions about his health on the eve of a Florida rally meant to kick off the home stretch before Election Day.

His impending return comes after the White House doctor said the president was no longer at risk of transmitting the coronavirus but did not say explicitly whether he had tested negative.

Mr Trump insisted he is now “immune” from the virus, a claim that was impossible to prove and added to the unknowns about the president’s health.

“I’m immune,” he said in an interview on Sunday. “The president is in very good shape to fight the battles.”

In a memo released on Saturday night by the White House, Navy Commander Dr Sean Conley said Mr Trump met the Centres for Disease Control and Prevention criteria for safely discontinuing isolation and that by “currently recognised standards” he was no longer considered a transmission risk. The memo did not declare that he had tested negative.

His return to full-fledged rallies will be in Florida later on Monday, amid stubborn deficits in the polls.

The White House has not indicated that any additional safety measures will be taken to prevent the transmission of the virus among those travelling on Air Force One, at the event site or at rallies scheduled for Pennsylvania and Iowa later in the week.

Campaign officials have signalled that Mr Trump will be travelling nearly every day for the rest of the campaign, and sometimes making more than one stop, an aggressive schedule for a 74-year-old who was in hospital days ago.

On Sunday, the president said he had “total and complete sign off from White House Doctors” to fully return to the campaign trail, insisting he can no longer spread the disease to others and is impervious to getting sick again.

The White House memo followed Mr Trump’s first public appearance since returning to the White House after being treated for coronavirus at a military hospital. Hundreds of people gathered on Saturday afternoon on the South Lawn for a Trump address on his support for law enforcement from a White House balcony.

He took off a mask moments after he emerged on the balcony to address the crowd on the lawn below. He spoke for 18 minutes, far less than his normal hour-plus rallies, and appeared healthy, if a little hoarse.

“I’m feeling great,” he told the crowd, before declaring that the pandemic, which has killed more than 210,000 Americans, was “disappearing” – despite surging cases in several states.

Officials organised the event yards from the Rose Garden, where two weeks ago the president held another large gathering to formally announce his nomination of Judge Amy Coney Barrett to the Supreme Court.

That gathering is being eyed as a possible Covid-19 superspreader event as more than two dozen people in attendance have contracted the virus.