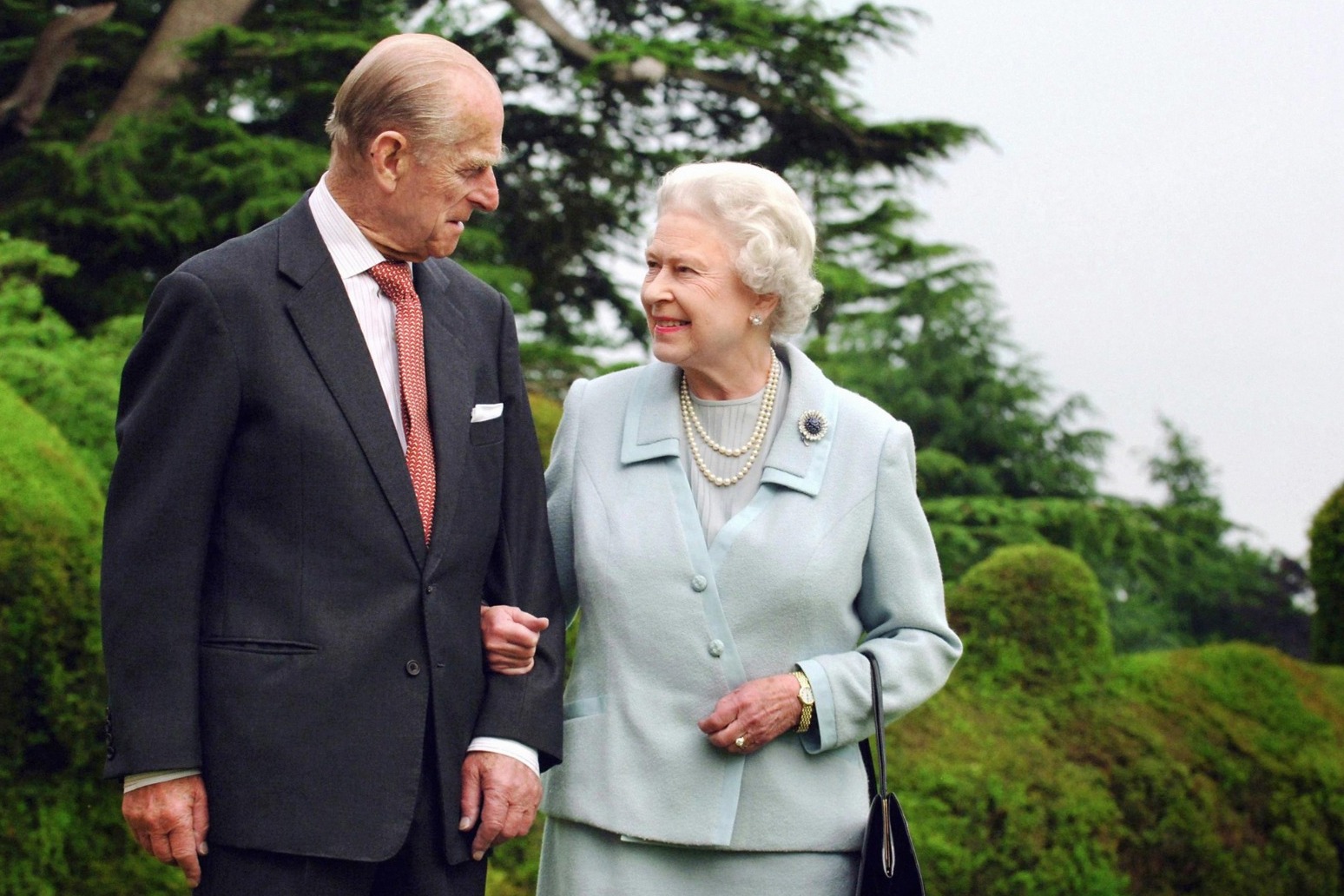 The Duke of Edinburgh gave a lifetime of royal service to the country and was the Queen’s beloved companion for more than 70 years.

Known for his no-nonsense approach and acerbic wit, Philip was the longest-serving consort in British history.

The husband of one of the most famous women in the world, he was defined by his relationship with Elizabeth II and relinquished the naval career he loved to steadfastly support his wife in her royal role.

While the Queen took centre stage, Philip was always, during his decades of duty, one step behind, ready to lend a hand.

Over the years, he carried out more than 22,000 solo engagements and gave more than 5,400 speeches, as well as taking part in thousands of other engagements with the Queen and committing himself to innumerable obligations behind the scenes.

The duke had a profound effect on the development of the British monarchy and was a moderniser of The Firm.

In private, he was head of the family. To the public, he was the irascible figure who spoke his mind despite the consequences, and was famed for his outrageous gaffes.

He once warned a group of Scottish students in China that they would become “slitty-eyed”.

In a Glasgow factory, he pointed to a fusebox of loose wires and remarked that it looked like it had been installed by an “Indian”.

He fought for Britain during the Second World War, serving with distinction in the Royal Navy.

As a younger man he was a good shot, a first-class polo player, accomplished sailor, enthusiastic cricketer and international four-in-hand carriage driver.

Hard-working and inquisitive, he dedicated himself to national life, and when he turned 90 was still associated with more than 780 charities.

He was the oldest serving partner of a reigning monarch, and finally retired from public duties in 2017, when he was 96.

Prince Philip of Greece and Denmark was born on the island of Corfu on June 10 1921, to Prince Andrew of Greece and Princess Alice of Battenberg.

His early years were marked by upheaval after his family went into exile following a military coup in Greece which overthrew his uncle, King Constantine I.

George V, the Queen’s grandfather, ordered the Royal Navy cruiser HMS Calypso to evacuate the family and Philip was carried to safety in a cot made from an orange box in December 1922, aged just 18 months.

His childhood lacked stability and he moved between relatives in France and Britain, beginning studying at Cheam Prep School in 1930.

His parent split up and he rarely saw either of them, with his mother, who suffered from mental illness, being confined to an asylum.

After spending a year at a school in Germany, he eventually went to Gordonstoun School in Morayshire.

Philip later joined the Royal Navy and, while a cadet, caught the eye of the 13-year-old Princess Elizabeth – a distant cousin – when she visited the Britannia Royal Naval College in Dartmouth with her parents, the King and Queen.

During the Second World War, he saw active service from the Indian Ocean to the Mediterranean, and by 1945 was in Tokyo Bay as the Japanese surrendered.

He was mentioned in despatches for his service on battleship HMS Valiant in 1941.

Over the years, his friendship with Princess Elizabeth grew and blossomed into love.

In 1947, two years after the end of the war, the princess married dashing, blond Philip in Westminster Abbey.

He renounced his Greek title and became a naturalised British subject, and was made the Duke of Edinburgh by the King.

Elizabeth and Philip’s compatibility led to a successful long marriage – despite their contrasting personalities – with the duke seen as adventurous and tempestuous, and the Queen as more passive, cautious and conventional.

The duke and the princess had the first of their four children, Prince Charles, now the Prince of Wales, in 1948 and then Princess Anne, now the Princess Royal, in 1950.

They initially enjoyed a simple married life during stays on the island of Malta where Philip was stationed with the Navy.

Philip – whose naval career had come to an end – had to a define a new role for himself as his wife diligently took to her duties as head of state.

He accompanied the Queen around the world on Commonwealth tours and state visits and across the UK.

He also undertook thousands of solo royal engagements, becoming involved with hundreds of organisations, often as a hands-on president.

During his years of royal service, without the Queen, he carried out 637 solo overseas visits, including 229 visits to 67 Commonwealth countries, and 408 visits to 76 other countries.

He set about modernising Buckingham Palace after being told to keep out of the Queen’s official duties, and reorganised the Balmoral and Sandringham estates, as well as becoming ranger of Windsor Great Park.

“I tried to find useful things to do,” he said about starting a footman training programme at the Palace.

In 1956, he set up The Duke of Edinburgh’s Award – inspired by his time at the boarding school Gordonstoun and his mentor and headmaster, Dr Kurt Hahn.

It has become one of the country’s best-known youth self-improvement schemes, with millions across the globe gaining their bronze, silver and gold awards.

The duke took a great interest in scientific and technological research and development, as well as the conservation of nature.

After a gap of 10 years, the Queen and Philip welcomed two more children – Prince Andrew, now the Duke of York, in 1960, and Prince Edward, now the Earl of Wessex, in 1964.

The duke was depicted as a tough but caring father.

An accomplished sportsman, he played polo regularly until 1971 and then took up four-in-hand carriage driving, representing Britain at several European and world championships. He also loved to shoot game.

A qualified pilot, he gained his RAF wings in 1953, helicopter wings in 1956 and private pilot’s licence in 1959. His love of the sea never waned, and he competed regularly at Cowes Regatta.

The duke witnessed first-hand the troubles faced by the Windsors in the 1990s, from the scandal surrounding Sarah, Duchess of York – who was caught having her toes sucked by her financial adviser – to the fallout of Charles and Diana’s War of the Waleses.

When Diana, Princess of Wales, died suddenly in a car crash in Paris in 1997, Philip joined Charles, Princes William and Harry, and Diana’s brother, Earl Spencer, in the solemn procession behind her funeral cortege.

The same year, the Queen paid a moving tribute to the duke on their golden wedding anniversary.

“He is someone who doesn’t take easily to compliments,” she said.

“But he has, quite simply, been my strength and stay all these years, and I, and his whole family, and this and many other countries, owe him a debt greater than he would ever claim, or we shall ever know.”

The duke helped the Queen through the deaths of both her mother and sister in the Golden Jubilee year of 2002, and was at her side in lockdown during the coronavirus pandemic.

He enjoyed good health throughout much of his life, recovering from a blocked coronary artery in 2011 and a bladder infection in 2012 – the latter leading him to miss the majority of the Queen’s Diamond Jubilee celebrations – and a hip replacement operation in 2018.

He was fit and active and continued to take part in fast-paced, dangerous carriage-driving events, competing at international level until the age of 85, but still riding non-competitively in later years.

When he was 97, he miraculously escaped unscathed when the Land Rover he was driving was involved in a serious crash with a car carrying a mother and a baby.

In a perfect example of his stubbornness and defiance, the duke was spotted driving without a seatbelt just 48 hours later.

Three weeks later, his days driving on public roads were over when he decided to voluntarily surrender his licence.

When he turned 90 in June 2011 he insisted there be no fuss, but the Queen bestowed on him a new title – Lord High Admiral, titular head of the Royal Navy.

It was a touching tribute to the man who had given up his military career to support his wife, and devote himself to royal responsibilities.

In May 2017, the Palace revealed that the duke had decided to soon retire from public duties.

Tributes were paid to his steadfast support of the Queen and his decades of outstanding service to the UK.

He took a typically irreverent view of his own retirement on the day it was announced, telling a guest who said he was sorry he was standing down: “Well, I can’t stand up much longer.”

On the day he officially retired, August 2 2017 at the age of 96, he rounded off his lengthy royal service with a trademark quip, telling Royal Marines who just completed a gruelling trek: “You all should be locked up.”

In November 2017, the Queen and the duke reached a rare milestone – 70 years of marriage – their platinum wedding anniversary.

Surrounded by family and friends, they marked the poignant occasion away from the spotlight with a black tie dinner at Windsor Castle.

In a touching anniversary present, the Queen appointed Philip a Knight Grand Cross of the Royal Victorian Order for his years of devotion and duty.

Even as he stepped back from public life, it was clear the duke’s behind-the-scenes support of his wife was unending.

Philip’s first ever private secretary, Michael Parker, a friend from the Navy, once revealed: “He told me the first day he offered me my job that his job, first, second and last was never to let her down.”

A symbol of continuity within the monarchy, the Duke of Edinburgh was the person the Queen relied upon above all others.