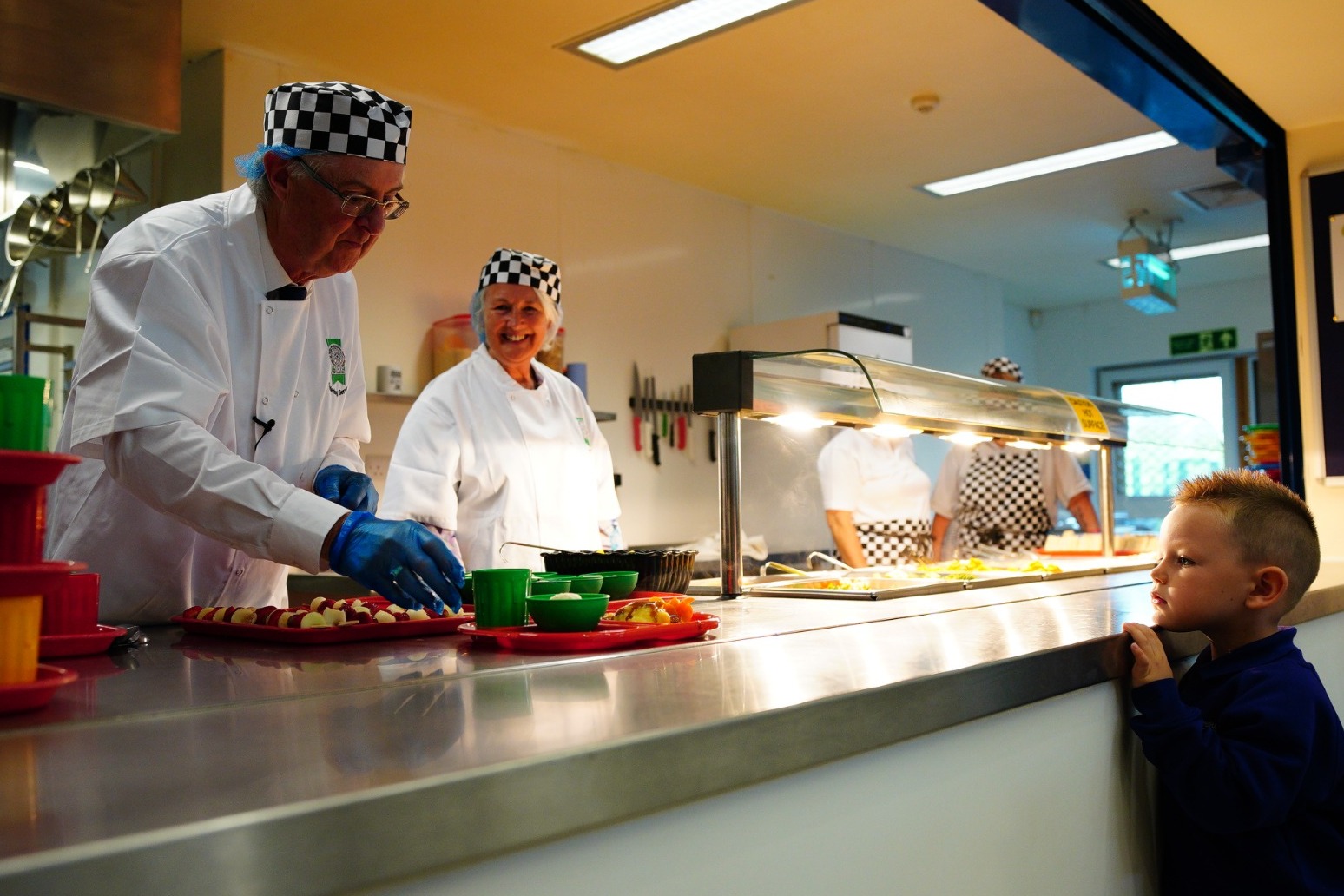 Mark Drakeford has been serving school lunches as he announced the roll-out of universal free meals to all in primary education in Wales.

Wales’ First Minister wore chef whites and a hair net on Wednesday as he served reception pupils at Ysgol y Preseli in Pembrokeshire, who are some of the first to benefit from the scheme.

Children aged between four and five who are starting school will be offered the meals from this month onwards.

It is part of a phased expansion of school meals to all primary school children in Wales by 2024, about 272,000 children.

Mr Drakeford said: “It brings together a number of policy objectives. Firstly, it is very important that no child goes hungry.

“When you’re not hungry, you’re better able to learn.

“So food is itself important, but its impact on learning is also important.

“We also want more of the food that is served to be bought locally, to make a contribution to local economies.

“And of course, by cutting down on things like food miles, we’re making a contribution to climate change policy alongside everything else.”

The scheme was one of the key commitments in the Labour and Plaid Cymru co-operation agreement signed last year.

Mr Drakeford said he hoped the joint policy would help families deal with the cost-of-living crisis.

“When we devised the policy we didn’t realise we would be facing inflation at rates beyond 10% and the reality that families across Wales are going to be facing very difficult winters,” he said.

“But if a single child in a family is now able to have a free school meal every day, that’s £15 a week released back into the budget of that family.

“That can mean the difference between managing and not managing.

“So it is a contribution, alongside other things we are doing to help families get through this winter.”

The Welsh Government has allocated £200 million to the scheme but, with rising food prices, energy and logistics costs, Mr Drakeford said they would be “watching the budget very carefully”.

Currently an average of 44% of primary school children receive free lunches, although this varies depending on local authority.

Some schools will have to more than double their capacity to serve hot meals.

Schools in eight local authorities, including Newport, Ceredigion, Blaenau Gwent, Torfaen, Pembrokeshire, Conwy, Vale of Glamorgan and Monmouthshire, have from this week begun offering meals to all students under the age of seven.

Others have extended the scheme already to year one, while Caerphilly Council plans to extend the meals to year two pupils from November.

Many are looking to complete the roll-out to all children from next September.

However there have been reports that other schools have been struggling to recruit people to the roles needed to carry out the expansion.

The Welsh Government said it was hoping to see an average take-up of school meals of 86%.

The Welsh Tories have criticised the plans for including even the “children of millionaires”.

However, the First Minister said he rejected this, adding: “We know that the history of free school meals is tainted by stigma.

“A way to deal with that is to make sure that this scheme is available to every child in every school in every part of Wales.”

In England all children from reception class to year two in state-funded schools are entitled to a free lunch, while in Scotland free school meals are offered to children in years one to five.