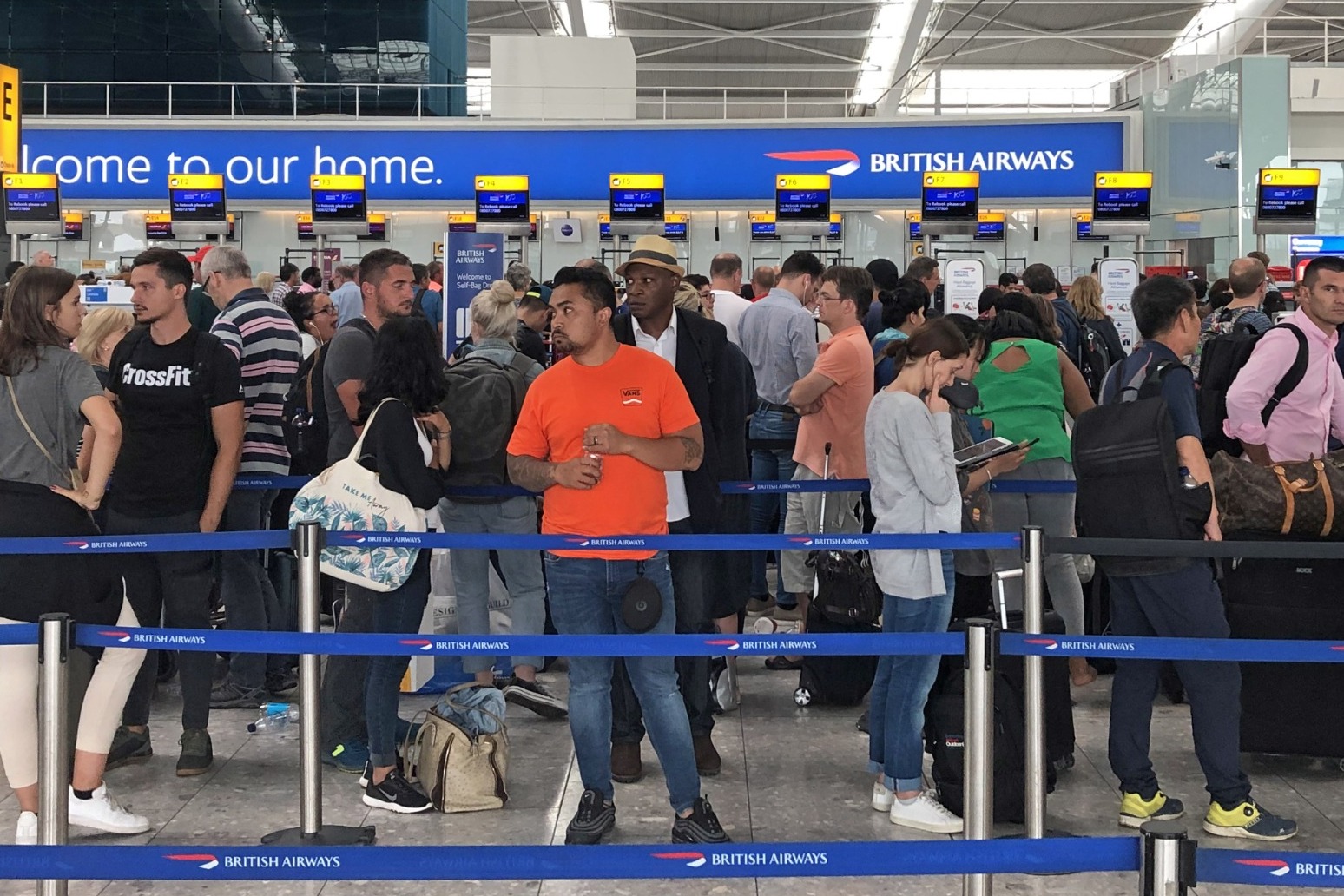 The Transport Secretary has rejected calls to open the door to more “cheap” foreign workers in a bid to relieve the pressure on the aviation sector.

Air passengers have faced days of disruption at Britain’s airports, with a total of 20 flights listed as cancelled at Gatwick Airport on Saturday, while 17 were marked as delayed.

Grant Shapps said he will “do absolutely everything possible to make sure” holidaymakers are able to get away without issues during the summer but stopped short of allowing a temporary migration influx to bridge the labour shortage.

Following a meeting with airports, airlines and ground handling companies last week, the Cabinet minister said he had answered industry demands to speed up security checks for workers and allow some staff in non-security related jobs to take up training immediately.

But he said it is up to the sector to fix the issues, accusing bosses of “cutting too far” during the coronavirus pandemic, despite receiving £8 billion of state support and having access to furlough money to keep staff on the books while travel restrictions were in place.

It came as London Mayor Sadiq Khan laid a portion of the blame on Brexit and urged ministers to open up jobs to European Union workers once again in order to avoid a summer of travel “misery”.

Mr Shapps, asked whether he would temporarily allow more foreign workers into the industry to alleviate staffing pressures, told the BBC’s Sunday Morning programme: “The answer can’t always be to reach for the lever marked ‘More immigration’.

“There is not some pull that is going to relieve this.”

The Transport Secretary denied that the UK’s divorce from Brussels was the main factor behind the chaos and queues seen at Britain’s airports over the four-day Platinum Jubilee break, pointing to large-scale disruption elsewhere in Europe.

On Saturday, the majority of flights for every airline at Amsterdam’s Schiphol airport were either listed as delayed or cancelled.

Mr Shapps added that the Brexit vote had been about moving away from hiring “cheap labour from somewhere else”.

“I didn’t vote for Brexit but the country did and we’ve made our choice – we want a high-wage, high-skilled economy,” he said.

“That means the aviation sector, like all other sectors, and as the HGV, the lorry driving sector has now done, needs to change.”

Mr Shapps said he will be pushing for it to be made easier for passengers to receive compensation or be given rearranged flights if they are inconvenienced, and called on airlines to rethink how they sell seats on their routes.

He also rejected demands for the Army to be brought in to assist with the situation.

The former Conservative Party chairman added: “We need the industry itself to deliver.

“It is very important that flights aren’t oversold, for example, and I want to make sure there is automatic compensation for passengers.

“We’ll work with the industry very hard between now and the summer to make sure we don’t see a repeat of those scenes.

“Clearly, they have been taken by surprise by the way people have returned to travel after two years of being locked down, but I’m not surprised – we were saying all along: You will need to be ready for this.”

The capital’s Labour leader told Sunday Morning: “What we don’t want is a spring misery turned into a summer misery.

“Many families who have saved, who have paid for a holiday and are looking forward to a holiday are going to be let down.

“What you can do very easily is make sure those who were in those jobs before, who have gone back to their country of origin, from the EU, are encouraged to come back.

“This is self-inflicted from the Government. Listen, it isn’t about Covid, this is about Brexit plus Covid.”

Lisa Webb, a law expert at consumer rights group Which?, said airlines needed to “follow the rules when flights are disrupted” following a “hellish week” for travellers.

“The shameful scenes at UK airports this half-term are the result of an industry in which some airlines feel they can get away with ignoring consumer rights and acting with near impunity,” she said.

“It is clear that passenger rights need to be strengthened, so the Government must drop plans to cut compensation for delayed and cancelled flights and the Civil Aviation Authority must be given the power to issue direct fines so it can hold airlines to account when they flout the law.”