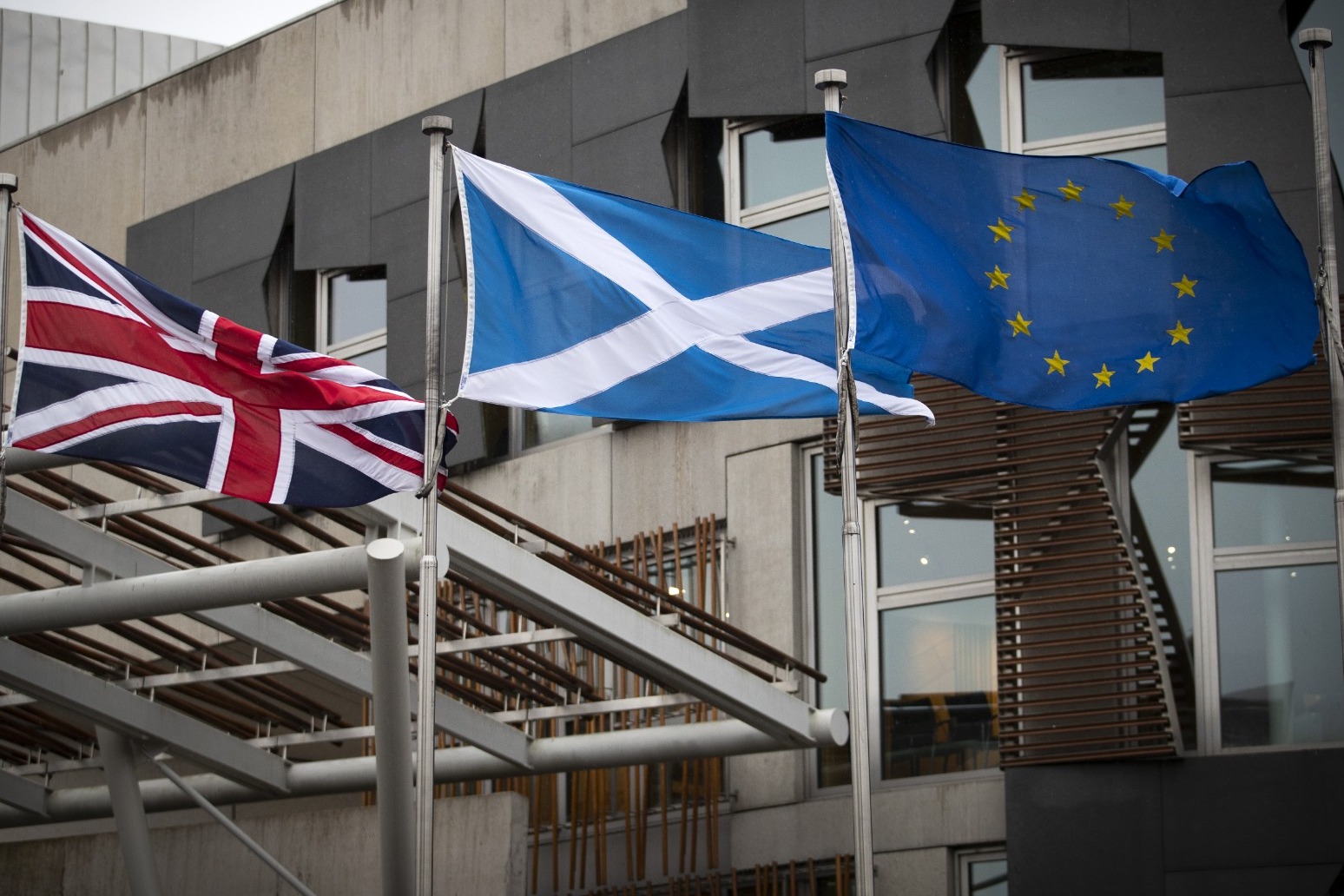 A majority of Scots would vote to remain in the United Kingdom if an independence referendum were to be held tomorrow, a new poll has found.

The survey of 1,015 Scots suggests 46% would vote against Scottish independence, compared to 43% in favour and 10% who are undecided.

When unsure voters are excluded, the poll by Savanta ConRes for the Scotland on Sunday newspaper indicates 52% to 48% in favour of the union.

The poll is the first to be carried out since Nicola Sturgeon and Alex Salmond gave evidence to the Holyrood inquiry into the unlawful investigation of the former first minister.

Carried out in the two days after the current First Minister appeared before the committee, the survey found 35% of respondents said the inquiry was making them less likely to vote for independence.

Another 16% said the inquiry was making them more likely to vote Yes, with 41% saying it had made no difference

According to the poll, 43% said their trust in Ms Sturgeon had fallen due to the inquiry.

But trust in Mr Salmond has fallen even more, with 57% stating believing him less than before the inquiry began.

The Committee on the Scottish Government Handling of Harassment Complaints was set up after Mr Salmond successfully challenged the lawfulness of the government’s investigation of him.

The former SNP leader, who led the Yes campaign in the 2014 independence referendum, was awarded a £512,250 payout after it emerged the investigating officer was found to have had prior contact with two of the female complainers.

At Edinburgh’s Court of Session, Lord Pentland described the investigation as “unlawful” and “tainted by apparent bias” after the Government conceded the judicial review the week before the case was due to be heard in court.

In the wake of the collapsed case, Mr Salmond has claimed there was a “malicious” plot to prolong the Government’s defence of the flawed investigation in the hope a looming criminal trial would “ride to the rescue” and spare them defeat in court.

He has also claimed his successor has broken the ministerial code in relation to the judicial review and by allegedly misleading Parliament about when she first knew of the allegations against him.

Ms Sturgeon was questioned for almost seven hours by the committee on Wednesday about her role in the botched investigation.

She told MSPs she “would never have wanted to ‘get’ Alex Salmond” and condemned the “absurd suggestion that anyone acted with malice or as part of a plot” against her predecessor.

Ms Sturgeon also apologised to the women who complained about Mr Salmond, saying they had been “failed” because of a “very serious mistake” in the Government’s investigation.

But she strenuously denied claims she broke the ministerial code by lying to Parliament, insisting she followed the advice of the Government’s law officers and stood by her recollection of meetings with Mr Salmond and his former chief of staff.

Associate director for Savanta ComRes, Chris Hopkins, said: “Although awareness of the Salmond inquiry has unsurprisingly increased since December, it’s not to say that the story has had a great impact on its protagonists, with those who say that they trust both Nicola Sturgeon and Alex Salmond more and less now increasing by virtually the same proportions.

“With only a fifth of 2014 No voters less likely to support independence because of the saga, its impact on the First Minister doesn’t look to be catastrophic – for now.”

Responding to the survey, an SNP spokeswoman said: “With Scotland on Sunday / Savanta Comres themselves stating that this poll is not comparable to previous polls and has not been properly weighted, it should be treated with caution.

“The SNP is looking forward to the election campaign where we will work to win support from across Scotland to continue to protect people from Covid, support Scotland’s NHS, create jobs, and make sure that as we recover from the pandemic, Scotland’s future is decided by the people who live here, not Boris Johnson’s Tory party.

“That is what people across the country are focussed on and that is what we will do.”