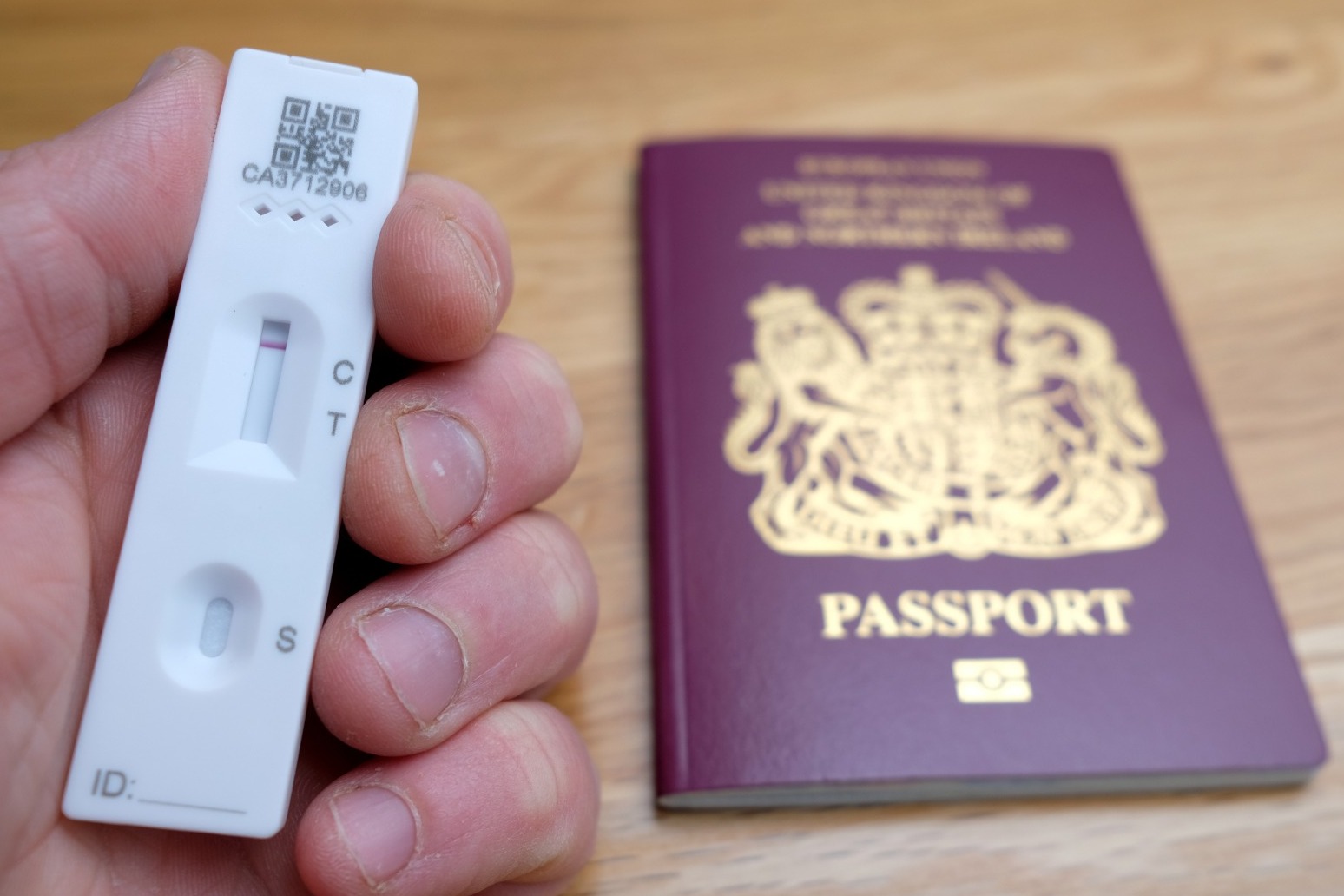 New rules designed to slow the spread of the Omicron variant of coronavirus will see travellers having to take a pre-departure test before travelling to England from Tuesday.

All travellers will be required to take a Covid-19 pre-departure test, amid warnings that the time between infection and infectiousness could be shorter with the new strain.

Health Secretary Sajid Javid cautioned the variant was spreading within communities, rather than just being linked to international travel.

And the decision on pre-departure tests followed calls from Labour to implement the process.

It will mean anyone travelling to the UK from countries not on the red list will be required to take a pre-departure test a maximum of 48 hours before leaving, regardless of their vaccination status.

And if they test positive, they will not be allowed to travel.

Scotland and Wales have said they will implement similar measures.

However, the requirement was greeted with anger and dismay across the travel sector.

On Monday, Mr Javid said: “The Omicron variant is continuing to spread here and around the world.

“According to the latest data there are now 261 confirmed cases in England, 71 in Scotland and four in Wales, bringing the total number of confirmed cases across the UK to 336.

“This includes cases with no links to international travel. So, we can conclude that there is now community transmission across multiple regions of England.”

He said the Government cannot “say for certain” whether Omicron will escape Covid vaccines, or how severe a disease it will cause.

He told MPs: “We are learning more about this new variant all the time.

“Recent analysis from the UK Health Security Agency suggests that the window between infection and infectiousness may be shorter for the Omicron variant than for the Delta variant, but we don’t yet have a complete picture of whether Omicron causes more severe disease or indeed how it interacts with the vaccines.

“We can’t say for certain at this point whether Omicron has the potential to knock us off our road to recovery.”

He added: “We are leaving nothing to chance. Our strategy is to buy ourselves times and to strengthen our defences while our world-leading scientists assess this new variant and what it means for our fight against Covid-19.”

But he said of the cases identified so far, none had resulted in hospital admission.

Mr Javid said the measures were temporary, and acknowledged they would cause disruption.

He said: “We’re taking this early action now so we don’t have to take tougher action later on, and so that we can take every opportunity to prevent more cases from arriving in our country.”

Labour leader Sir Keir Starmer said the Government must now do “whatever it can” to lower the price of Covid-19 pre-departure tests.

He said: “I would have liked to see the Government act more quickly. As ever, they are behind the curve. As soon as we saw the scientific evidence saying that (there) should be pre-departure tests, we called on the Government to do this last week. The Government delayed, as they always do.

“They’ve done it now, that’s a good thing. But the Government needs to get ahead instead of being behind.”

He added: “I also want to see the Government doing whatever it can to bring the price of these tests down because lots of people… (are) getting really hammered by prices that can’t be justified.”

Those arriving from countries on the red list of travel restrictions will need to quarantine in hotels.

Meanwhile, pressure continued to mount on No 10 to explain reports over alleged parties in Downing Street last Christmas.

In the Commons, shadow health secretary Wes Streeting said people in his Ilford constituency were being prosecuted for holding an indoor gathering on the same day.

He said: “Isn’t it time that the Government comes clean about the event in Downing Street on that same day, admit they broke the rules and apologise – or does the Secretary of State believe, as the Prime Minister appears to, that it’s one rule for them and another rule for everyone else?”

Mr Javid replied: “In terms of rules, of course they should apply to everyone, regardless of who they are.”

The Daily Mirror reported that two events took place in No 10 last year in the run-up to the festive season, including Boris Johnson giving a speech at a leaving do during November’s lockdown.

The other was said to be a staff party in December, where party games were played, food and drinks were served, and revelries went on past midnight.

At the time, the Tier 3 rules in place in London explicitly banned work Christmas lunches and parties where it is “a primarily social activity and is not otherwise permitted”.

On Monday, the Prime Minister’s former chief adviser Dominic Cummings said on Twitter it would be “v unwise for No10 to lie about this” and alleged that some political journalists were at parties in the Downing Street flat.

Mr Cummings stopped working for the Government in November 2020.

The Government said, as of 9am on Monday, there had been a further 51,459 lab-confirmed Covid-19 cases in the UK.

It also said that a further 41 people had died within 28 days of testing positive for Covid-19.

Separate figures published by the Office for National Statistics show there have now been 170,000 deaths registered in the UK where Covid-19 was mentioned on the death certificate.