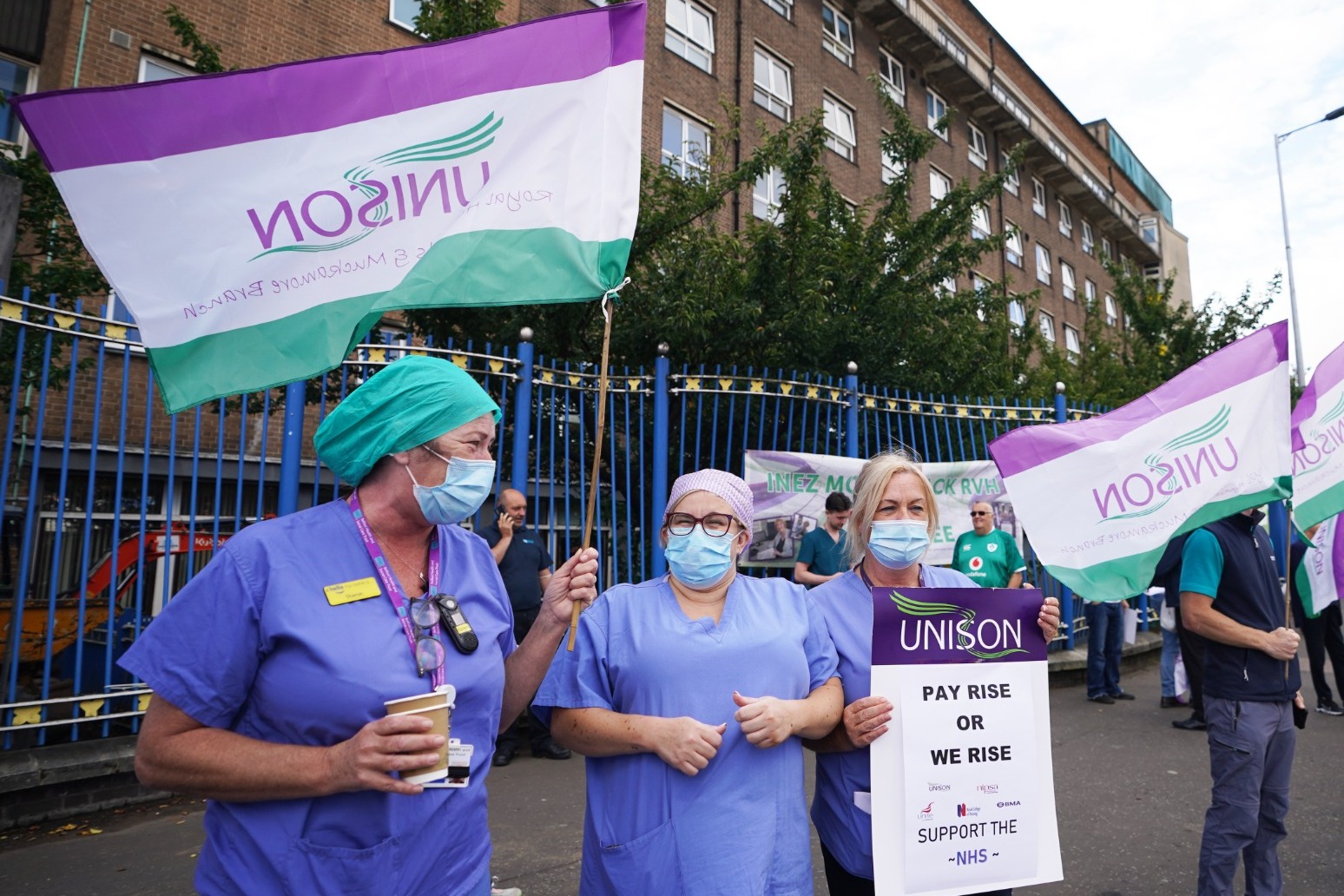 Around 350,000 members of Unison are being asked if they want to walk out

Hundreds of thousands of health workers start voting on Thursday on whether to strike over pay.

Around 350,000 members of Unison working for more than 250 health trusts and boards across England, Wales and Northern Ireland, are being balloted.

Porters, nurses, security guards, paramedics, cleaners, midwives, occupational therapists and other NHS staff are among those being asked if they want to mount a campaign of industrial action.

Around 50,000 Unison health employees in Scotland are already being balloted.

Unison urged Prime Minister Rishi Sunak to increase the rise of £1,400 awarded to health workers in England earlier in the summer

Unison general secretary Christina McAnea said: “Striking is the last thing dedicated health workers want to do, but with services in such a dire state, and staff struggling to deliver for patients with fewer colleagues than ever, many feel like the end of the road has been reached.

“The NHS is losing experienced staff at alarming rates. Health workers are leaving for work that pays better and doesn’t take such a toll on them and their families.

“If this continues, the health service will never conquer the backlog and treat the millions desperately awaiting care.

“It feels like the NHS is in the last chance saloon, but a vote for industrial action might be the jolt that convinces ministers to make the NHS the priority they say it is.

“Strikes across the NHS this winter are not inevitable. The Government must start to tackle the growing workforce crisis with an inflation-busting pay rise and get the NHS back on the long road to recovery.”

NHS workers in other unions, including nurses and ambulance staff, are also being balloted for strikes, threatening a huge outbreak of industrial action later in the year.

The Westminster government announced in July that most NHS staff on Agenda for Change contracts (NHS terms and conditions) in England would get a pay rise of £1,400, in line with the recommendation of the NHS pay review body.

Health workers in Wales got the same award. The health minister in Northern Ireland said he wanted to implement the same award but could not do so due to the political stalemate.

In Scotland, Unison has been balloting its 50,000 health members recommending rejection of a 5% offer from the Scottish government.

Last week, the Scottish government improved its offer to a £2,205 flat-rate increase. The union is currently deciding its next steps.

A Department of Health and Social Care spokesperson said: “We are giving over one million NHS workers a pay rise of at least £1,400 this year, as recommended by the independent NHS Pay Review Body, on top of 3% last year when pay was frozen in the wider public sector.

“Industrial action is a matter for unions, and we urge them to carefully consider the potential impacts on patients.”

Unison’s Scottish health committee later decided to suspend the strike ballot among members in Scotland so they can be consulted over the Scottish government’s latest offer of a £2,205 flat rate increase.

Unison official Wilma Brown said: “This is a final pay offer from the Scottish government, it is also significantly different from the previous offers, so we think it is right that NHS members decide whether they are willing to accept it.

“Unison is a member led union, so members will decide. NHS staff are working through two crises: an NHS crisis and a cost-of-living crisis.

“This offer will go some way to helping them with the latter but we have a huge amount of work to do to get our NHS to be world class again, irrespective of the outcome of this consultation the Scottish government need to see this as the beginning of a journey back to full health for the NHS.”