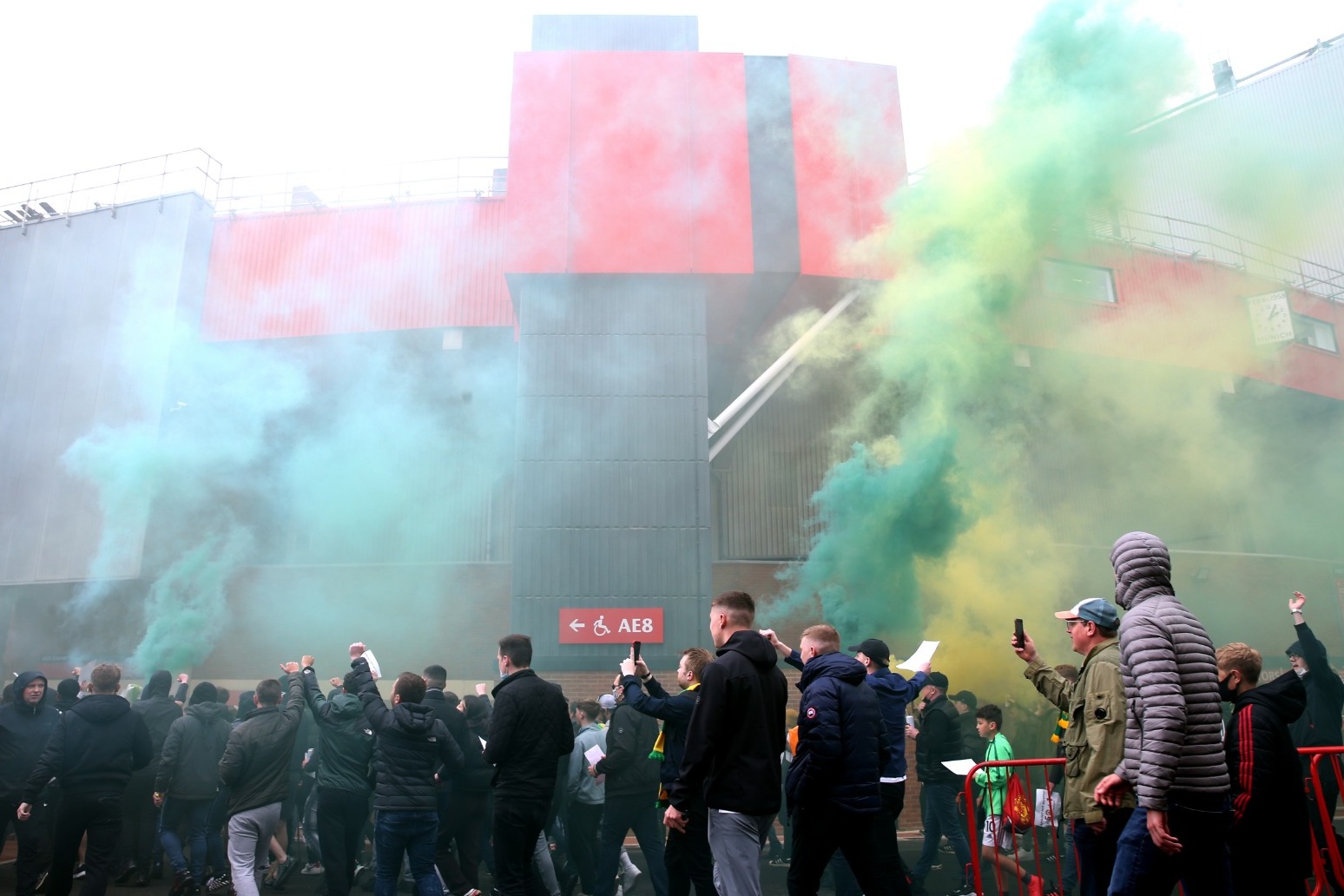 Greater Manchester Police (GMP) confirmed that two officers were injured with one officer being “attacked with a bottle and sustaining a significant slash wound to his face, requiring emergency hospital treatment”.

It happened after around 100 fans stormed the pitch at Old Trafford on Sunday ahead of the game in protest at Manchester United’s American owners, the Glazer family.

Reacting to the scenes, Foreign Office minister James Cleverly said that while he “cannot condone” fans’ behaviour, it was important to recognise the “frustrations” they have with football clubs.

Mr Cleverly told Sky News on Monday: “Looking at the scenes that we have just seen on the programme, there can’t be an excuse for that kind of behaviour.”

He added: “So I cannot condone the images that we have seen about storming the ground, but we do need to understand the frustrations that fans have, not just with Manchester United, but with a number of clubs across the game.”

Outside the ground, injuries were inflicted as a group began hurling bottles and barriers at officers and horses in violence which should be condemned in “the strongest possible terms” by football pundits, clubs and players, according to National Police Federation chairman John Apter.

He said: “Yet again we’ve seen a so-called peaceful protest turn to violence with that aimed at my colleagues. Officers were injured and required hospital treatment. This is completely unacceptable.”

Stu Berry, chairman of the Greater Manchester Police Federation, said officers are not “punchbags for people protesting” a cause.

He added: “At the end of their shifts, hard-working police officers should be able to go home to their families in one piece. Not be rushed to hospital.”

He said the culprits must be identified and prosecuted because football fans do support peaceful protest in favour of the national game but these were “appalling scenes” of “mindless violence” that was carried out by a “minority” of people.

GMP assistant chief constable Russ Jackson said it was clear many demonstrators had no intention of protesting peacefully as he condemned their “reckless and dangerous” behaviour.

Manchester United were among 12 clubs that last month signed up for the breakaway Super League, which collapsed within 48 hours due to huge, unrelenting pressure.

Police said that by late afternoon around 200 protesters had gathered outside the Lowry theatre and more than 1,000 at the stadium.

Firecrackers were let off outside the ground as protesters marched towards the Munich Tunnel with green and yellow smoke filling the air.

Red fences put in front of the East Stand did not last long as the handful of stewards were swiftly overcome and barriers toppled.

Safety and security fears forced the match, which was supposed to kick-off at 4.30pm, to be postponed. It is to take place on a date which has yet to be set.

Andy Burnham, the mayor of Greater Manchester, said on Twitter: “It is important to make clear that the majority of supporters made their protest peacefully today. However, there is no excuse for the actions of a minority who injured police officers and endangered the safety of others.

“This could be an important moment to change football for the better. We should all condemn violence of any kind and keep the focus on the behaviour of those at the top of the game.”

The Premier League said it understood the fans’ “strength of feeling”, but condemned “all acts of violence, criminal damage and trespass, especially given the associated Covid-19 breaches”.

It added: “Fans have many channels by which to make their views known, but the actions of a minority seen today have no justification.

“We sympathise with the police and stewards who had to deal with a dangerous situation that should have no place in football.”