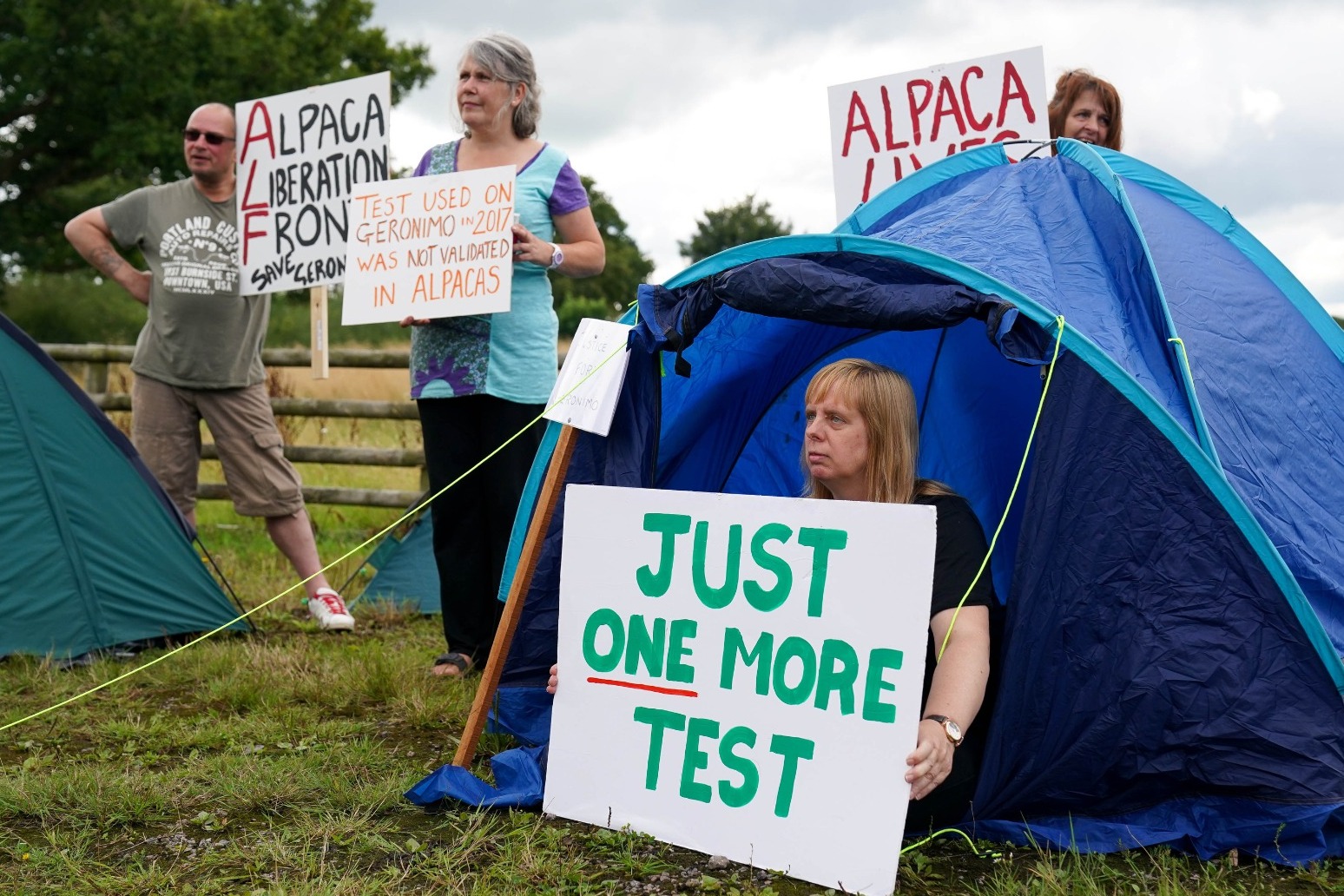 The owner of Geronimo the alpaca has welcomed the support she has received from across the world as she continues the fight to stop her animal being culled by the Government.

The owner of Geronimo the alpaca has welcomed the support she has received from across the world as she continues the fight to stop her animal being culled by the Government.

Helen Macdonald said she had received messages of support from New Zealand, from Malaysia and across Europe.

Supporters have also been camping out at her farm near Wickwar, South Gloucestershire, in case officials from the Department of Environment, Food and Rural Affairs (Defra) arrive to destroy the alpaca.

The destruction warrant is valid until September 4 and Ms Macdonald wants the Government to allow Geronimo to be tested for a third time or let him live to aid research into the disease.

“The groundswell of support from around the world and everything that everyone is doing gives me hope that Defra will look at this and say they don’t have any data for multiple priming in camelids and take a pause and look at this properly.

Ms Macdonald, a veterinary nurse, praised the assistance she has received from people who have travelled from all over the UK to her farm.

“We’ve been soldiering on for four years and to have this support is so wonderful,” she said.

“There’s a movement here now and there’s anger, sadness and outrage about wrongdoing.

“It’s just growing by the hour. The petition is growing, and the responses are growing.

“It’s huge and it’s very, very welcome because what we are dealing with is not whether Geronimo has TB but the fact they knowingly misused tests to create a suspicion of disease and to kill him four years ago.

“There’s no science to back up what they’re saying, and we need to move forward in a positive way. Everyone is asking for that now, listen to the electorate and sit down and sort out this properly.”

Ms Macdonald accused Prime Minister Boris Johnson, Environment Secretary George Eustice and Defra officials of “hiding in plain sight” having heard nothing from any of them.

“I invite them to come and sit down and talk about it. They don’t have any evidence and they can’t keep denying evidence from multiple priming or they would have shown it to us by now.

“It’s not fair and all we’re asking for is they use appropriate testing on camelids and stop treating them like cattle.”

Ms Macdonald, who imported Geronimo from New Zealand, has received an outpouring of support from the public, with more than 130,000 people signing a petition calling on the Prime Minister to halt the killing.

On Wednesday, a High Court judge refused her lawyer’s application for a temporary injunction to stop the destruction order and reopen the case.

Ms Macdonald said that when Defra officials do attend her farm to euthanise Geronimo, she will not break the law.

As well as alpacas, badgers have been a victim of the fight against bovine TB, with mass culling employed to stop the spread since 2013, sparking a huge public backlash.

Last week, the Government insisted all the evidence on the animal’s condition had been “looked at very carefully”.

A Defra spokesman said: “We are sympathetic to Ms Macdonald’s situation – just as we are with everyone with animals affected by this terrible disease.

“While nobody wants to cull animals, we need to do everything we can to tackle this disease to stop it spreading and to protect the livelihoods of those affected.”