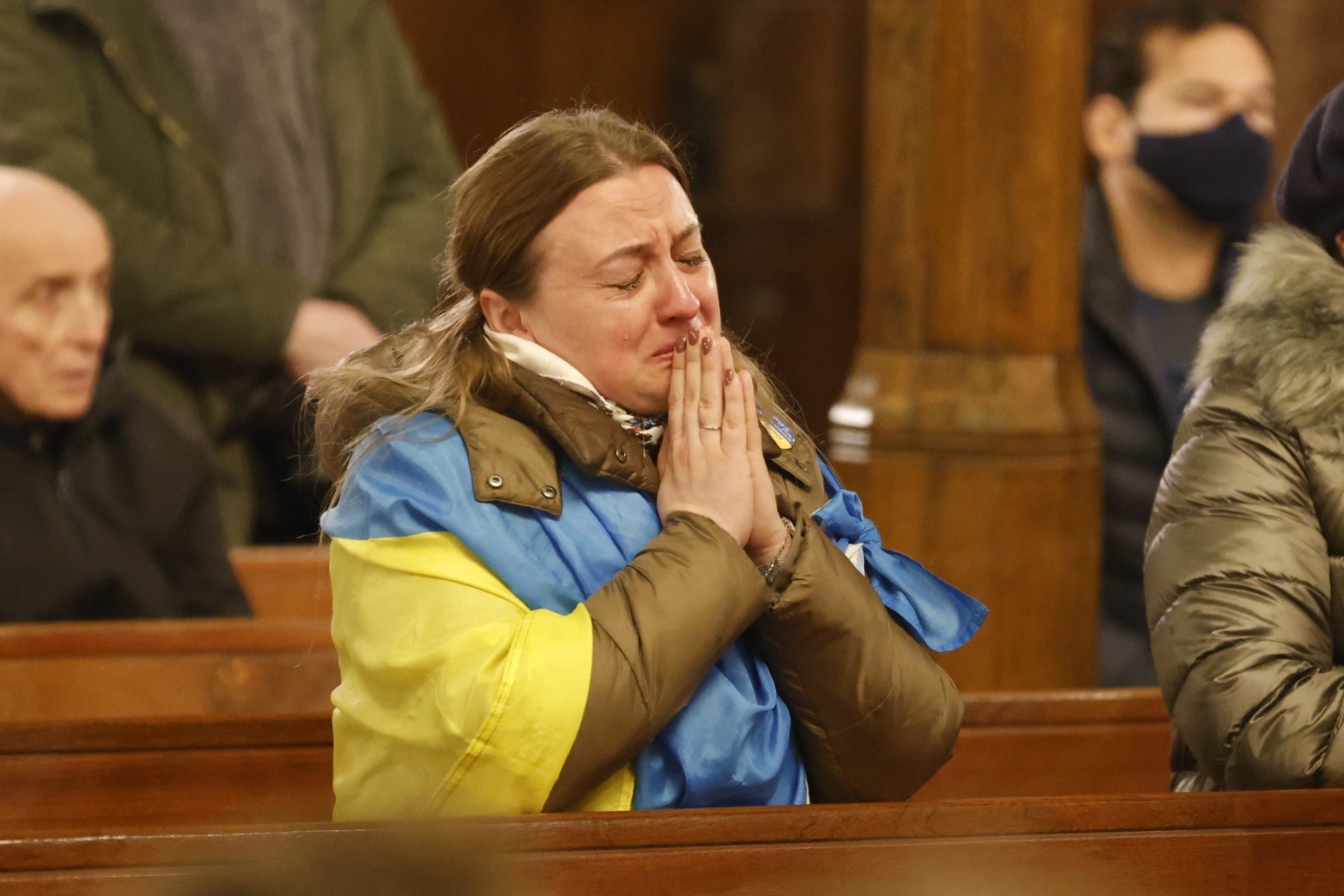 Boris Johnson has called Russia’s invasion of Ukraine a “disastrous misbegotten venture by President Putin” as the Kremlin’s forces continue to face fierce resistance on the ground.

Ahead of the United Nations holding a rare emergency meeting of its General Assembly over the crisis, the Prime Minister also told the Ukrainian President Volodymyr Zelensky that Britain would do all it could to get more arms to his military.

Mr Zelensky told Mr Johnson the next 24 hours would a “crucial period” for his country.

A Ukrainian delegation is due to meet the Russians “without precondition” on Monday on the border with Belarus, although Mr Zelensky has indicated he sees little prospect of any meaningful dialogue.

In the meantime, Russian and Ukrainian forces have again been engaged in heavy fighting ahead of the widely expected assault on the capital.

Ukrainian defenders have put up stiff resistance that appeared to slow the invasion, but a US official cautioned that far stronger Russian forces inevitably will learn and adapt their tactics as Russia’s assault goes on.

But the sanctions the UK, the US and other nations have imposed on Russia appear to be already having an impact.

By early Monday morning the ruble had already sunk by nearly 26% against the US dollar after Western nations moved to block Russian banks from the SWIFT global payment system.

Sanctions announced earlier had taken the Russian currency to its lowest level against the US dollar in history.

Earlier, Mr Johnson dismissed a dramatic announcement by Vladimir Putin that he was putting Russia’s nuclear forces on heightened alert as a “distraction” from the failure of his troops to breakthrough in Ukraine.

Mr Johnson said Mr Putin’s nuclear order appeared to be an attempt to divert from the fact that his efforts to re-make the post-Cold War order in Europe were failing.

“What’s actually happening is that they (the Ukrainians) are fighting back perhaps with more effect, with more resistance, than the Kremlin had bargained for,” he said during a visit to the Ukrainian Catholic Church in London.

“This is a disastrous misbegotten venture by President Putin.”

President Putin sent shock waves through Western capitals with his instruction on Sunday to his top military leaders to put the strategic nuclear deterrent on a “special regime of combat duty”.

The US said it was “completely unacceptable” while a senior US defence official was quoted as warning the Russian leader had made any “miscalculation… much, much more dangerous”.

It came on a day in which much of the world appeared to turn its back on Russia in revulsion at the invasion of neighbouring Ukraine.

At the same time the expected Russian assault on Kyiv again failed to materialise, while in the country’s second city, Kharkiv, the authorities claimed to have successfully driven out invading Russian troops.

Mr Putin’s increasing diplomatic isolation is expected to underline a rare emergency session of the United Nations General Assembly in New York on Monday at 10am (3pm GMT) to discuss the crisis in Ukraine. It will be only the 11th time such a session has been held and is expected to last at least all day.

The Security Council will meet at 10pm (GMT).

– The ruble has sunk nearly 26% against the US dollar after Western nations moved to block Russian banks from the SWIFT global payment system.

– The UK Government is fast-tracking plans to tackle “dirty money” and expose foreign oligarchs who launder their wealth through the UK’s property market in the wake of Russia’s invasion of Ukraine.

– Boris Johnson has announced that immediate family members will be able to join Ukrainians settled in the UK as they flee the Russian invasion.

– The European Union said it would supply arms to Ukraine while imposing a fresh round of sanctions banning Russian aircraft from the EU airspace and barring the Kremlin-backed media, RT and Sputnik.

– BP announced it is selling its £10 billion stake in oil producer Rosneft, which it co-owns with the Kremlin, after pressure from the Government.

– The Football Association said England would not play Russia for the foreseeable future while FIFA said all Russia’s matches must be played in neutral countries without supporters.

Announcing his decision to raise the alert level of Russia’s nuclear forces, Mr Putin cited “aggressive statements” by Western powers and the punitive economic sanctions piling up on his country.

Over the weekend the G7 nations agreed to impose sanctions on Russia’s central bank while excluding a number of Russian lenders from the crucial Swift system of global payments.

Foreign Secretary Liz Truss said UK officials were drawing up a “hit list” of oligarchs close to the Kremlin to be targeted with asset freezes and travel bans over the coming weeks.

In his call with Mr Zelensky, Mr Johnson said the UK would not only continue to supply defensive weapons to Ukraine but would assist other countries in doing so as well. It follows a donors conference on Friday where Defence Secretary Ben Wallace said Britain would deal with the logistics of getting equipment into a war zone.

“President Zelensky said he believed the next 24 hours was a crucial period for Ukraine, and the Prime Minister said he would do all he could to help ensure defensive aid from the UK and allies reached Ukraine,” a No 10 spokesman said.