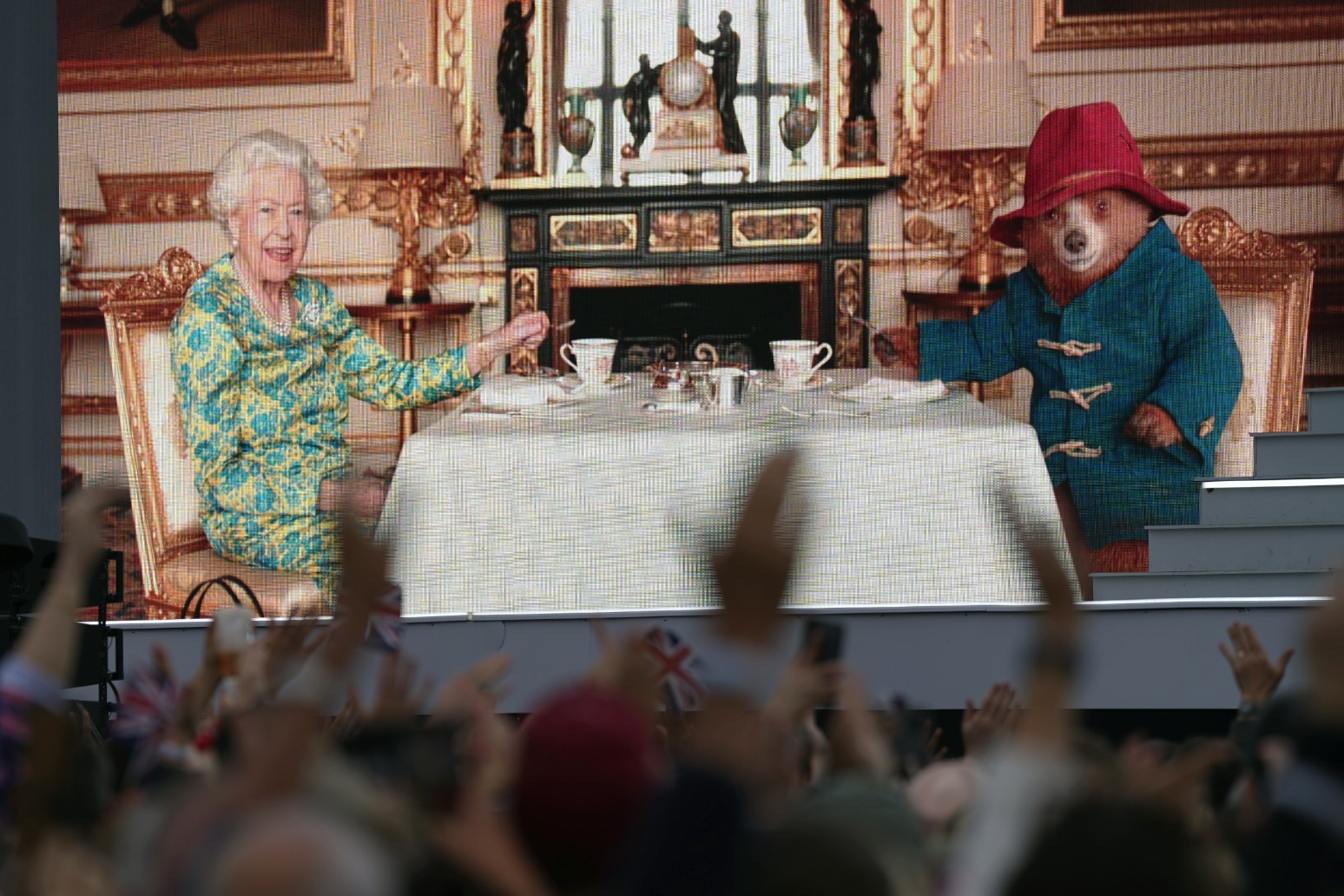 The monarch made a special appearance in a video at the start of the concert, alongside another national treasure

The Queen brought the house down at her own Platinum Jubilee party when she was joined for a cream tea by a national treasure – Paddington Bear.

For the 2012 Olympic opening ceremony, James Bond famously made an appearance with the Queen – and now it was the turn of everyone’s favourite Peruvian bear – who was filmed alongside the monarch.

The Queen revealed she shares Paddington’s love of marmalade sandwiches and keeps an emergency stash in her trademark handbag.

The film was shown as the star-studded party in the shadow of Buckingham Palace began, and the Queen and her furry guest had a novel way of introducing the first act – tapping out the beat of Queen’s We Will Rock You on China teacups.

Prince George and Princess Charlotte, who earlier made a surprise visit to Cardiff Castle with their parents for a Jubilee event, were sat in the front row of the royal box for the concert alongside the Duke and Duchess of Cambridge, Prince of Wales and Duchess of Cornwall.

Queen guitarist Brian May and drummer Roger Taylor paid tribute to the monarch, who did not attend the party, before they took to the stage, describing her as an “incredible woman” and hinting at the Paddington moment said she was a “very good sport”.

Thousands queued in The Mall for much of the day for the musical tribute which will see Alicia Keys, Hans Zimmer, George Ezra, and Eurovision 2022 runner-up Sam Ryder take to the stage.

The Prince of Wales and Duke of Cambridge will also pay tribute to the Queen in front of 22,000 spectators and a television audience of millions.

The concert came at the end of a busy day that saw the royal family travel around the country joining people celebrating the Queen’s 70-year reign.

Derby Day was missing the Queen, who has suffered a recurrence of her mobility problems, but her granddaughter Zara Phillips, who joined her family including the Princess Royal at the Epsom Racecourse, said the monarch would have watched at home in her “comfy clothes”.

Known for her quick wit and seeing the amusing side of situations, it probably did not take long to persuade the head of state to take part in the filming with Paddington.

Taylor told Sky News: “This is a wonderful occasion, to do this for this incredible woman that’s been there all of our lives.”

He added: “She’s kind of the wallpaper of our lives in the nicest way – she’s just always been there like a rock through all the miserable times, all the good times.”

And he cheekily said: “Sorry for nicking your name.”

May said: “She’s extraordinary whether you approve of her or not, you cannot but help but admire this woman, who’s done her job so incredibly well for so long, with such dignity and aplomb.”

Queen + Adam Lambert kicked off the show in true rock fashion and had the crowed clapping in unison as they played hits like Don’t Stop Me Now and We Are The Champions and at one point all the royals waving union flats.

With Boris Johnson watching comic Lee Mack could not resist a reference to the partygate scandal that has dogged the Prime Minister.

He told the crowds: “We are here right outside the gates of Buckingham Palace for the party of a lifetime. And I tell you what, finally you can say the words ‘party’ and ‘gate’ – and it’s a positive.”