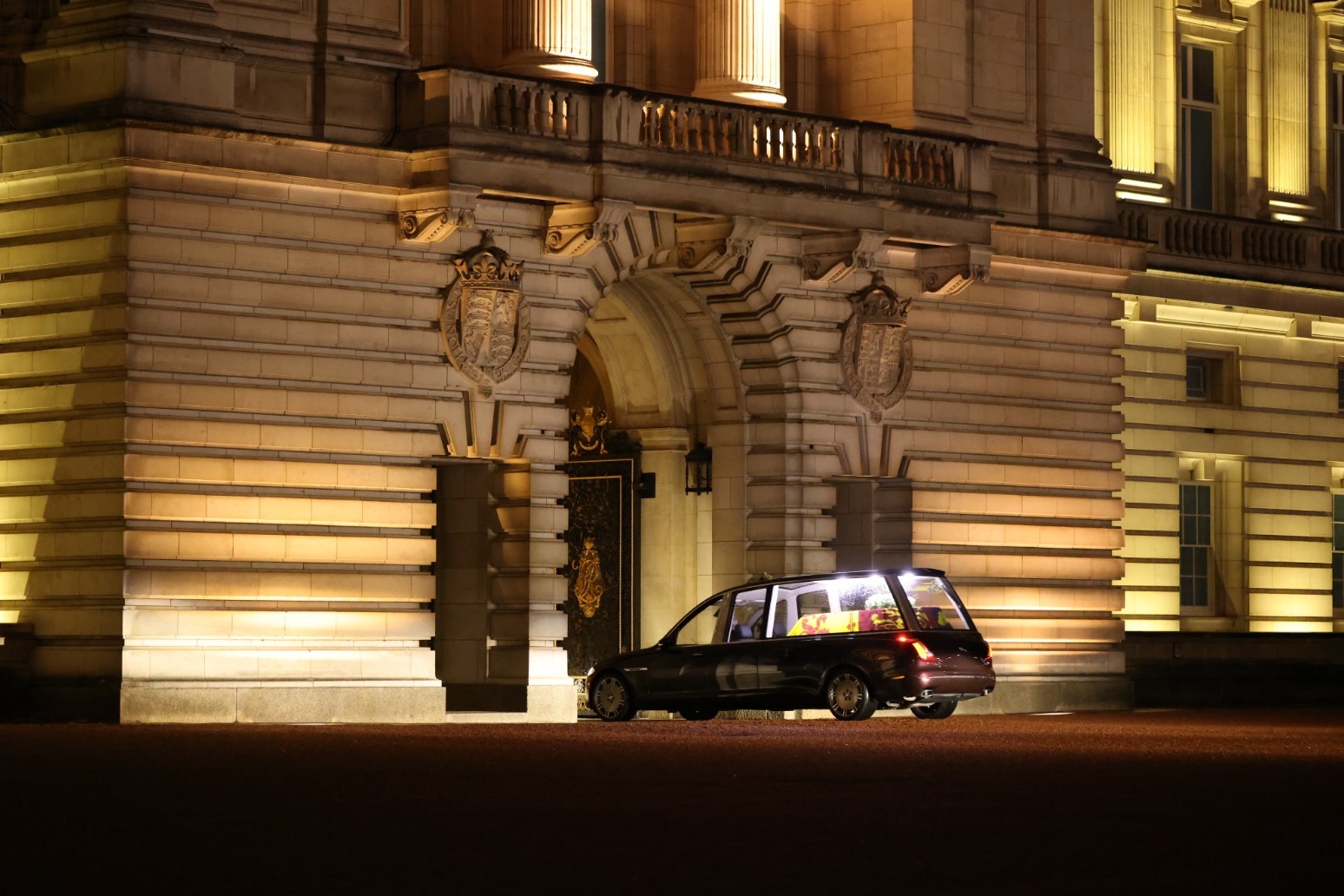 The Queen has returned to Buckingham Palace and her family, who turned out to witness the arrival of her coffin at the royal residence affectionately known as the “office”.

Standing at the grand entrance, King Charles III and his Queen Consort were surrounded by the late monarch’s children and grandchildren and their partners, including the Prince and Princess of Wales and Duke and Duchess of Sussex.

For one night the coffin will lie at rest in the palace’s bow room before the monarch is handed to the nation to allow the public to pay their respects when she lies in state at the ancient Westminster Hall for four days.

The Princess Royal, who has travelled with the Queen on her journey from Balmoral to London via Edinburgh alongside husband Vice Admiral Sir Tim Laurence, issued a moving tribute to her mother after the military plane carrying her coffin arrived at London’s RAF Northolt.

Anne said she was “fortunate” to be able to share “the last 24 hours of my dearest mother’s life” in a statement, adding: “It has been an honour and a privilege to accompany her on her final journeys.

“Witnessing the love and respect shown by so many on these journeys has been both humbling and uplifting.

“We will all share unique memories. I offer my thanks to each and every one who share our sense of loss.”

Charles travelled to Northern Ireland on his tour of the home nations, and he pledged to “seek the welfare” of all Northern Ireland’s people, and described how his family have felt their “sorrows” as the Queen’s peacebuilding efforts were praised.

The King, who in 2015 made a pilgrimage to the site of his great-uncle Lord Mountbatten’s murder in an IRA bombing, said the Queen had “never ceased to pray for the best of times for this place and its people”.

Speaking at Hillsborough Castle in Co Down, the royal residence in Northern Ireland, the new monarch said the late Queen was aware of her position in bringing together divided communities “whom history had separated”.

Under leaden skies that rained on the waiting public, the Queen’s coffin was transported in a new state hearse designed by Jaguar Land Rover and the Royal Household, with the late monarch consulted on the plans, said Buckingham Palace.

With a glass roof and large side windows, it was designed to give members of the public a clear view, and featured interior lights that shone brightly in the gloomy London evening as they illuminated the coffin draped in a royal standard with a wreath of Balmoral blooms.

As it travelled, sections of busy roads like the A40 came to a stop with drivers stood by the central reservation watching while the public lined the pavements.

At moments there was applause and cheers and a few blooms were thrown into the path of the state hearse, and when it neared Buckingham Palace three cheers went up, and some people lit up the area with the torches on their camera phones, holding them above their heads.

On the steps of the grand entrance Charles and Camilla were joined by William, Kate, Meghan and Harry along with the Earl and Countess of Wessex and their children Lady Louise and Viscount Severn, the Duke of York and his daughters Princess Eugenie and her husband Jack Brooksbank and Princess Beatrice and her spouse Edoardo Mapelli Mozzi.

Lady Sarah Chatto and Earl Snowdon, the children of Princess Margaret the Queen’s sister, were among the group to pay their respects to their aunt.

Standing in the palace’s quadrangle was a guard of honour formed from the 1st Battalion Coldstream Guards and they gave the royal salute as the hearse came to a stop.

The bearer party, from the Queen’s Company 1st Battalion Grenadier Guards, carried the coffin into the bow room and in a poignant moment the sovereign’s piper, Pipe Major Paul Burns of the Royal Regiment of Scotland, will played a lament.