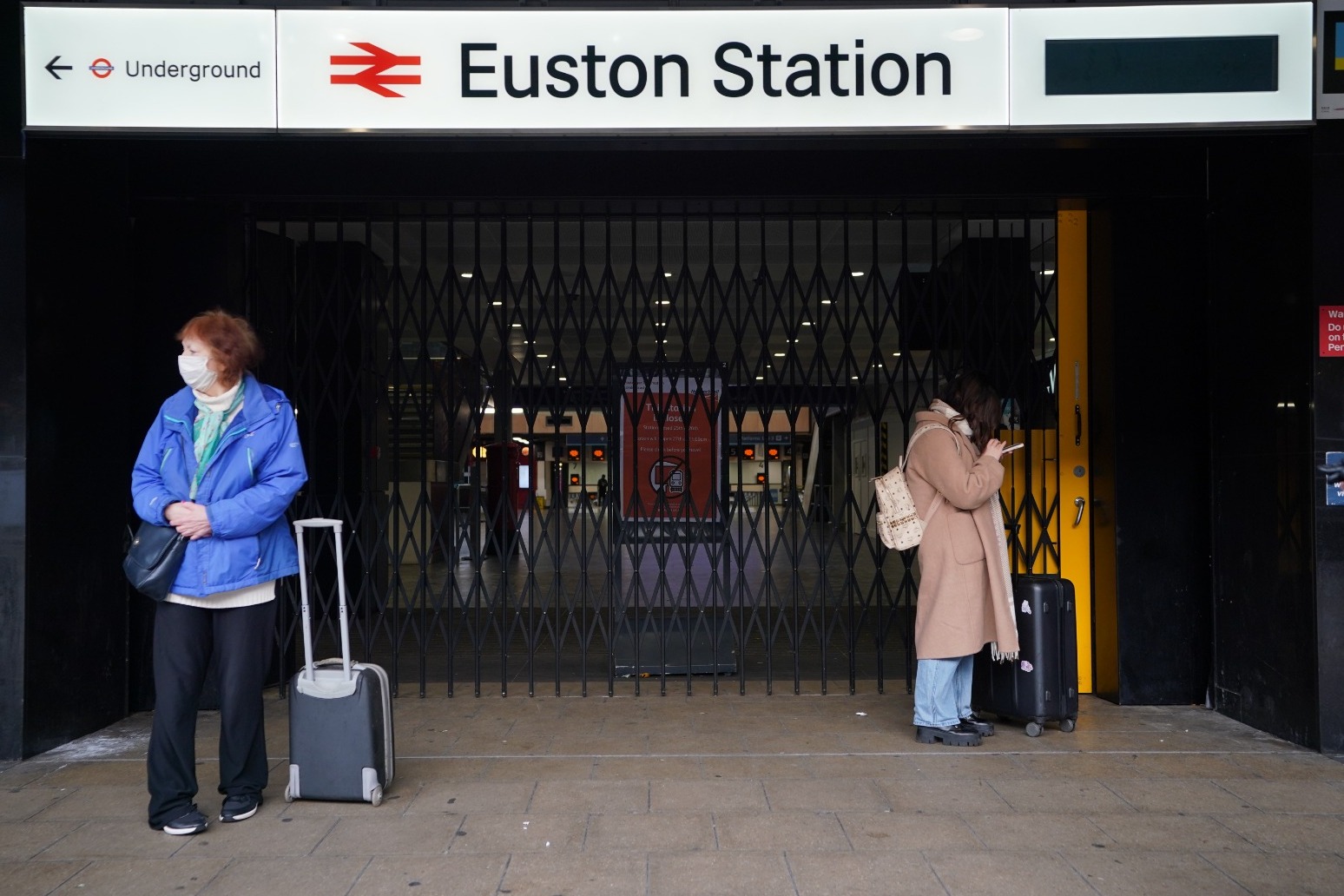 Rail passengers will face fresh travel disruption from Tuesday as tens of thousands of workers take strike action in bitter disputes over pay, jobs and conditions.

Members of the Rail, Maritime and Transport union (RMT) at Network Rail and 14 train operators will stage two 48-hour walkouts from Tuesday and Friday, while drivers in the Aslef union will strike on Thursday.

Picket lines will again be mounted outside railway stations across the country in a repeat of what became a familiar sight last year.

Passengers, including those returning to work after the festive break, are being warned to expect “significant disruption” as only a limited number of trains will run.

The advice is to only travel if absolutely necessary, allow extra time and check when first and last trains will depart.

There may also be disruption to services on Sunday as the striking workers return to their duties.

On RMT strike days, around half of the network will shut down, with only about 20% of normal services running.

Trains that do run will start later and finish much earlier than usual – with services typically running between 7.30am and 6.30pm on the day of the strike.

The train drivers’ strike on Thursday will affect 15 operators and will result in even fewer services running, with some companies operating “very significantly reduced” timetables.

Daniel Mann, director of industry operations at the Rail Delivery Group, said: “No-one wants to see these strikes go ahead, and we can only apologise to passengers and to the many businesses who will be hit by this unnecessary and damaging disruption.

“We would advise passengers to only travel if it is absolutely necessary during this period, allow extra time and check when their first and last train will depart. Passengers with tickets for between 3-7 January can use their ticket the day before the ticket date, or up to and including Tuesday 10 January.

“This dispute will only be resolved by agreeing the long overdue reforms to working arrangements needed to put the industry on a sustainable footing, rather than unions condemning their members to losing more pay in the new year.”

Mick Lynch, RMT general secretary, said there “is an unprecedented level of ministerial interference” preventing a settlement to the dispute.

He said: “The Government is blocking the union’s attempts to reach a negotiated settlement with the rail employers.

“We have worked with the rail industry to reach successful negotiated settlements ever since privatisation in 1993, and we have achieved deals across the network in 2021 and 2022 where the Department for Transport has no involvement.

“Yet in this dispute, there is an unprecedented level of ministerial interference, which is hamstringing rail employers from being able to negotiate a package of measures with us, so we can settle this dispute.

“We will continue our industrial action campaign while we work towards a negotiated resolution.”

Aslef general secretary Mick Whelan told the PA news agency that the union is “in it for the long haul”, adding: “We don’t want to go on strike but the companies have pushed us into this place.

“They have not offered our members a penny, and these are people who have not had an increase since April 2019.

“That means they expect train drivers at these companies to take a real-terms pay cut – to work just as hard for considerably less – when inflation is running at north of 14%.

“The train companies say their hands have been tied by the Government. While the Government, which does not employ us, says it’s up to the companies to negotiate with us.

“We are always happy to negotiate – we never refuse to sit down at the table and talk, but these companies have offered us nothing, and that is unacceptable.”

A Department for Transport spokesperson said: “Passengers have rightly had enough of rail strikes and want the disruption to end.

“The Government has demonstrated it is being reasonable and stands ready to facilitate a resolution to rail disputes. It’s time the unions came to the table and played their part as well.

“Inflation-matching pay increases for all public sector workers would cost everyone more in the long term – worsening debt, fuelling inflation, and costing every household an extra £1,000.

“Unions should step back from this strike action so we can start 2023 by ending this damaging dispute.”