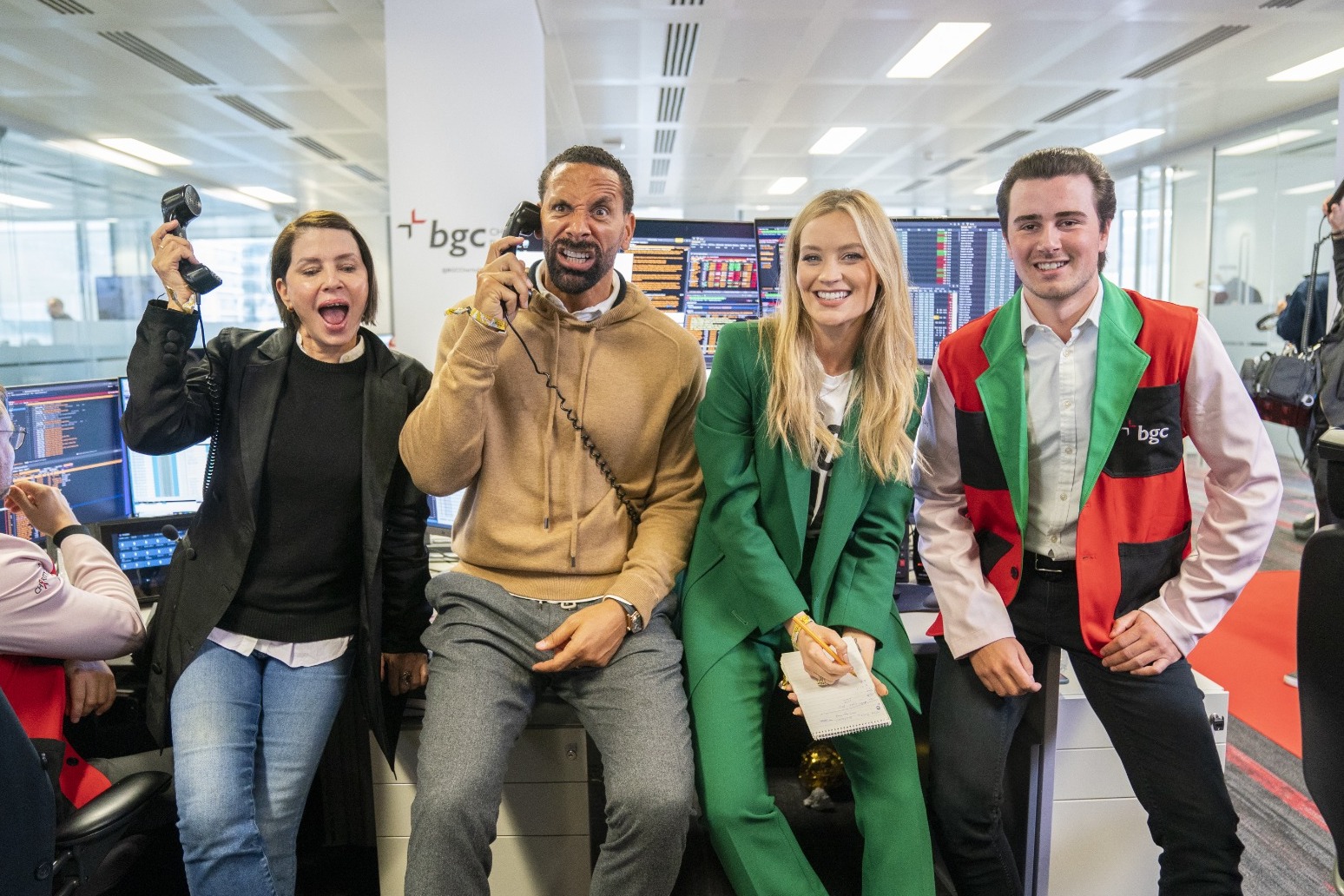 Rio Ferdinand has spoken about the importance of raising money for charity as he turned his hand to trading in honour of those killed in the September 11 attacks.

The former England footballer, 43, was among stars including actress Sadie Frost and TV presenters Davina McCall and Laura Whitmore who picked up the phone at a charity event.

Celebrities returned to the annual event at brokerage firm BGC Partners on Thursday to raise millions of pounds in memory of the 658 BGC employees and 61 Eurobrokers employees who died during the 9/11 attacks in 2001.

Ferdinand told the PA news agency: “I have been here a few times, always good, always lively, loads and loads of football fans here as well so it is always welcoming.”

Talking about an earlier trade with a football fan, he said: “He said he met me in a nightclub, it’s a bit early to have them conversations, money is getting raised so it’s fantastic.

“Every time you come here everyone’s excitable, they understand what it’s about, big moment in the calendar, loads of charities are going to benefit from it.

“You can’t be nothing but happy and bubbly when you come in here today.”

Ferdinand, who was supporting charity Wellbeing Of Women, commented on the importance of raising money, particularly during the cost-of-living crisis.

He said: “The economic crisis at the moment, people are struggling, even just to get food on the table, heating, we’re coming into the winter months as well.

“So anything you can do for charity is going to help people being very much squeezed at the moment. I think it’s definitely worthwhile.”

His comments come a day after the Bank of England launched an emergency UK government bond-buying programme to prevent borrowing costs from spiralling out of control and stave off a “material risk to UK financial stability”.

The footballer, who is married to former The Only Way Is Essex star Kate Ferdinand, said of his chosen charity: “I’ve obviously got a lot of women who are dear to me and my family so being part of a charity, that is definitely important.”

Since its launch in 2004, BGC and its celebrity ambassadors have raised around 192 million dollars (£176 million) for global charitable causes.

Frost was another celebrity who returned to the trading room floor, supporting late actress Helen McCrory and Damian Lewis’s charity HVH Arts, which offers young people a “gateway to the arts”.

She told PA: “I am from the Camden area, I grew up where this charity is based, it’s HVH Arts set up by Helen McCrory and Damian Lewis, I am one of the patrons, I have been involved for quite a long time.

“When I was young I got the opportunity to go to dance school… I just feel that everybody should have the opportunity to do what they want and I think this charity really supports young people who want to get involved in music, photography, film, fashion.

“It is a really consistent charity and that is what I like about it. I have worked with a lot of different charities but this one I feel is very hands on, consistent and really changes lives.”

Speaking about the importance of raising money during the cost-of-living crisis, the 57-year-old said it is a “really important time, more than ever”.

Frost said: “The sad thing is when people come under pressure, I’m noticing in my field people are cutting back and charities are the first thing often people don’t support.

“Something like today… it has been going on for so long people really do like the way this is operated, it does raise money, it works.

“I think people have to think outside the box to raise money, I think people get fatigued and tired but people and charities need support and we all have to do our bit.”

The actress and film producer said about trading that she gets “a bit nervous” but it is always “energetic”.

She added: “I’ve done a couple of trades, there is so many characters, I always gravitate towards the guys who are a lot of fun, you have a lot of fun and you do some deals and we did a few and I’m very happy, my work is done.”

All profits from trades are donated to good causes including the Cantor Fitzgerald Relief Fund and dozens of other charities around the world.