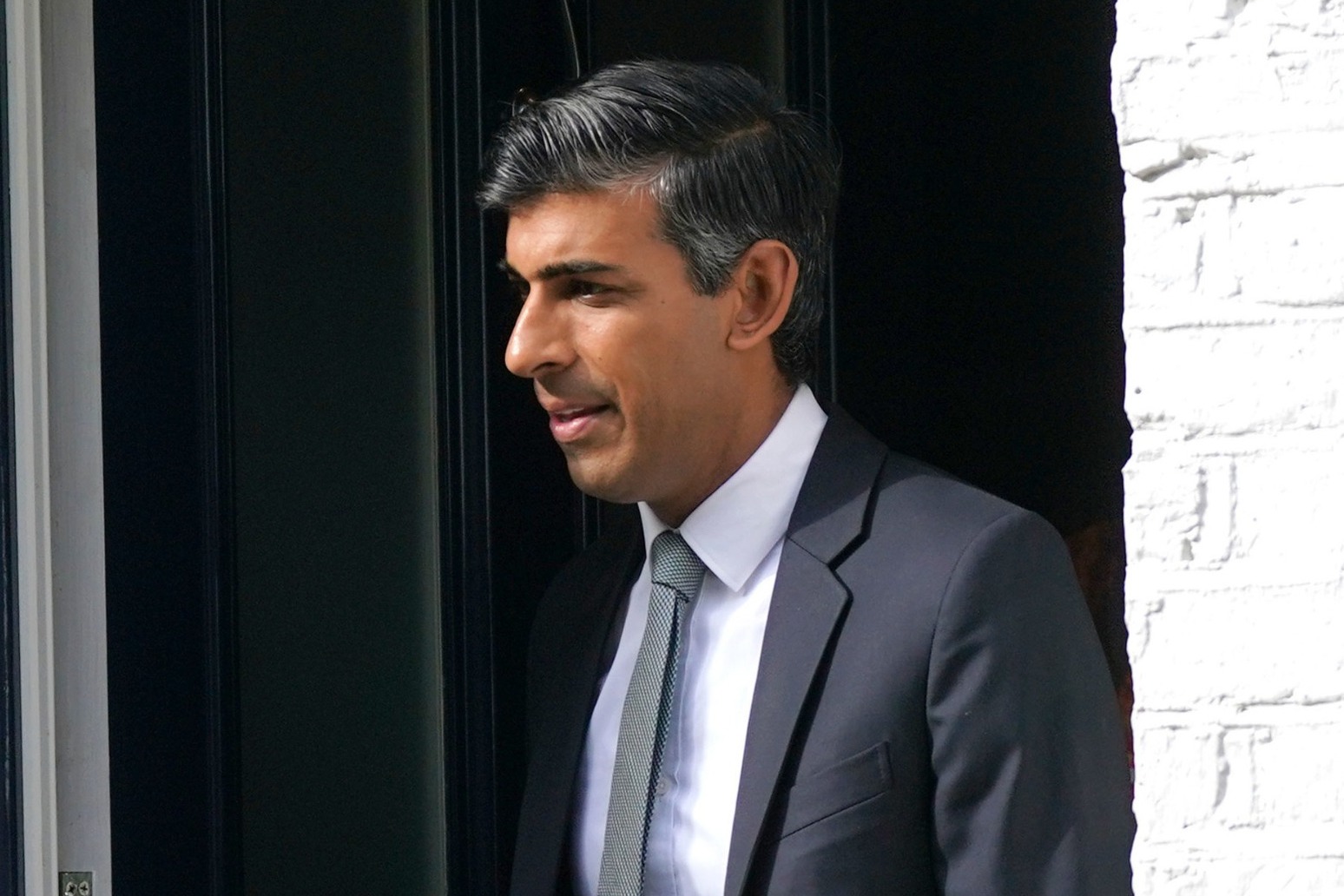 Rishi Sunak is believed to have become the first Conservative leadership candidate to secure the backing of 100 MPs, shoring up sufficient support to be on the ballot for Monday’s vote.

On Friday night the former chancellor’s supporters said he had amassed the necessary numbers to reach the threshold, way ahead of the deadline.

Boris Johnson was lagging behind, as was Commons Leader Penny Mordaunt who became the first to confirm her candidacy to replace Liz Truss as Prime Minister.

But Mr Johnson has told allies he is “up for it” and was flying back overnight from his holiday in the Dominican Republic to enter the race and attempt an extraordinary comeback.

Sky News photographed the ex-PM and his wife Carrie Johnson on an overnight British Airways flight back from the Dominican Republic with their children and said the MP received “one or two boos” as he boarded.

There is speculation among backers of the old Downing Street neighbours that they could strike a deal to stand together, but this would need them both to bury a lot of rancour.

Mr Sunak, who came second against Ms Truss in the last race six weeks ago, has around 82 public declarations, far ahead Mr Johnson’s 48, while Ms Mordaunt struggles on 18.

But a source in the former chancellor’s camp told the PA news agency he had won the backing of 100 colleagues to make it to the next stage.

Tory MPs will vote on Monday, and two candidates will be put forward to the Tory membership unless one pulls out, with a result being announced on Friday.

Mr Rees-Mogg said Tory party members should decide who is the next leader rather than MPs, telling the Daily Telegraph’s Chopper’s Politics podcast that returning Mr Johnson to No 10 would calm the stock markets.

The Business Secretary said Mr Johnson’s reinstalment would provide financial stability because it would mean the general election would not need to be held until late 2024.

Mr Rees-Mogg added: “I’m always in favour of the members deciding the leadership – I think that’s the right place for it to go. And I think the 1922 Committee and the Board of the Tory Party have done really well to get it to a position where that can be done swiftly. I’m in favour of it going to the membership.”

He went on to say that it was “an error” for Tory MPs to dump Mr Johnson, adding: “Boris Johnson’s attraction is that he is a big, charismatic political figure who is able to get things done and who is able to connect with voters in a way that no other politician of this era can.”

Mr Rees-Mogg’s market prediction was contrary to that of some economists, with the head of currency strategy at Rabobank, Jane Foley, telling the Financial Times Mr Johnson’s time in office had been characterised by “a lack of leadership from a government very distracted by one scandal after another”, and “the chance that that could come back is not going to be welcomed by markets”.

Analysts at Berenberg Bank said there were greater market risks from a Johnson government, with FT reporting the bank told its clients: “Given that a majority of Conservative MPs probably do not want Johnson as their leader, the prospects of mass resignations and a further descent into chaos would loom large.”

It came as former Tory leader Lord William Hague warned Mr Johnson’s return would lead to a “death spiral” for the Conservative Party.

“And I think it’s possibly the worst idea I’ve heard of in the 46 years I’ve been a member of the Conservative Party,” he told Times Radio.

Neither Mr Johnson or Mr Sunak have officially launched their campaigns, unlike Ms Mordaunt who put her name forward with a pledge to re-unite the bitterly divided Tory Party.

The Leader of the House – who finished third in the last leadership election – said she had been encouraged by the support she had received from fellow Conservative MPs.

“I’ve been encouraged by support from colleagues who want a fresh start, a united party and leadership in the national interest,” she said in a statement posted on social media.

“I’m running to be the leader of the Conservative Party and your Prime Minister – to unite our country, deliver our pledges and win the next GE (general election).”

The announcement from Ms Mordaunt came after she assured Jeremy Hunt he could stay on as Chancellor if she won.

Mr Johnson’s supporters have been urging him to mount a comeback six weeks after he left No 10 when he was forced to resign by a Cabinet rebellion over a series of scandals.

Ally Sir James Duddridge said Mr Johnson has told him he is “up for it”, and would head back from his Caribbean holiday and land in the UK on Saturday.

The trade minister told the PA news agency: “I’ve been in contact with the boss via WhatsApp.

Some MPs have warned they would resign the Tory whip and sit in the Commons as independents if Mr Johnson returns to Downing Street.

Defence Secretary Ben Wallace ruled himself out as a candidate, saying he was “leaning towards” backing his long-time ally Mr Johnson.

Mr Wallace praised his record on investing in defence and pointing to the “huge majority” he won in 2019.

He told broadcasters: “This will be potentially our third prime minister since the general election of 2019 – that means we have to think about that legitimacy question that the public will be asking themselves, and also about who could win the next election – that’s obviously important for any political party at the time.”

Candidates have until 2pm on Monday to secure the 100 nominations, limiting the ballot to a maximum of three candidates.

Supporters of Mr Johnson believe that if he can make it to the last two, he will win in the final online ballot of party activists with whom he remains hugely popular.

Mr Sunak won the backing of Sajid Javid, his predecessor as chancellor who backed Ms Truss in the last race and Mr Johnson in 2019.

Mr Javid said Mr Sunak has the “values our party needs” to help them “move on from the mistakes of the past”.

Former minister Johnny Mercer also backed Mr Sunak, and argued he could not put himself or his constituents through another Johnson administration after the “terrible” lows last time around.

“I love Boris to bits, and he’s got amazing qualities for this country, but it is now time for serious, competent, straight-forward and values-based governance.”