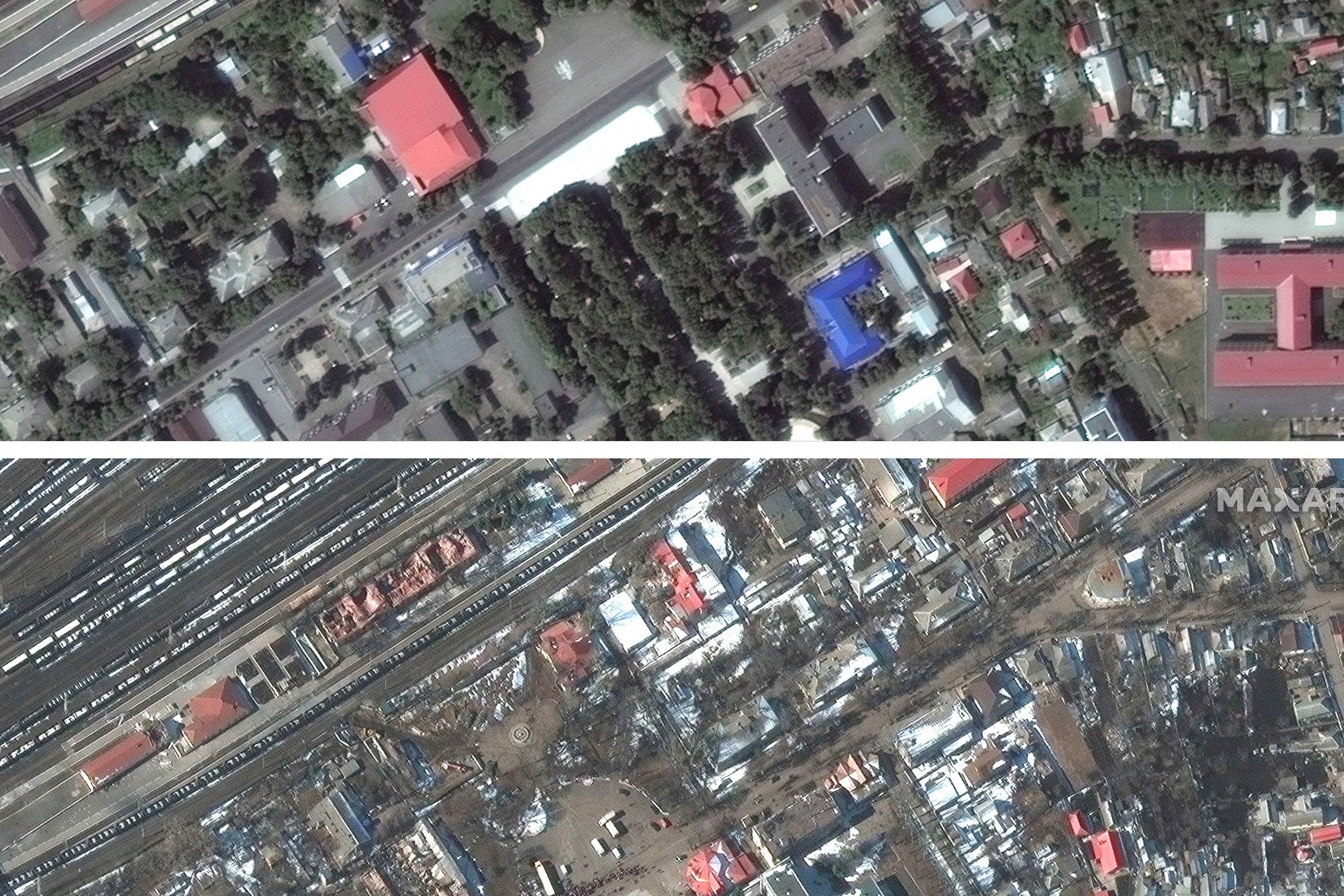 Russian forces pressed their assault on Ukrainian cities on Friday, hitting a building near a western city’s airport with missiles.

Lviv mayor Andriy Sadovyi said on Telegram that several missiles hit a facility used to repair military aircraft and damaged a bus repair facility, though no casualties were immediately reported.

The aircraft repair facility had suspended work ahead of the attack, the mayor said.

The missiles that hit Lviv were launched from the Black Sea, but two of the six that were launched were shot down, Ukrainian air force’s western command said on Facebook.

Not far from the Polish border and well behind the front lines, Lviv and the surrounding area has not been spared Russia’s attacks, the worst of which killed nearly three dozen people last weekend at a training facility near the city.

Meanwhile, the city’s population has swelled by some 200,000 as people from elsewhere in Ukraine have sought shelter there.

Smoke could be seen rising from the western part of the capital Kyiv after an early morning barrage on Friday. There were no immediate reports of casualties or what had been damaged.

Rescue workers searched for survivors in the ruins of a theatre that served as a shelter when it was blown apart by a Russian air strike in the besieged southern city of Mariupol.

And in Merefa, near the north-east city of Kharkiv, at least 21 people were killed when Russian artillery destroyed a school and a community centre, a local official said.

US Secretary of State Antony Blinken said on Thursday that American officials were evaluating potential war crimes and that if the intentional targeting of civilians by Russia is confirmed, there will be “massive consequences”.

She said many of the daily attacks battering Ukrainian cities “are reportedly indiscriminate” and involve the use of “explosive weapons with a wide impact area”.

Ms DiCarlo said the devastation in Mariupol and Kharkiv ”raises grave fears about the fate of millions of residents of Kyiv and other cities facing intensifying attacks”.

In Mariupol, hundreds of civilians were said to have taken shelter in a grand, columned theatre in the city’s centre when it was hit on Wednesday by a Russian airstrike.

More than a day later, there were no reports of deaths and conflicting reports on whether anyone had emerged from the rubble.

Communications are disrupted across the city and movement is difficult because of shelling and other fighting.

Satellite imagery on Monday from Maxar Technologies showed huge white letters on the pavement outside the theatre spelling out “CHILDREN” in Russian — “DETI” — to alert warplanes to the vulnerable people hiding inside.

“We hope and we think that some people who stayed in the shelter under the theatre could survive,” Petro Andrushchenko, an official with the mayor’s office, told The Associated Press.

He said the building had a relatively modern basement bomb shelter designed to withstand airstrikes. Other officials said earlier that some people had got out.

Video and photos provided by the Ukrainian military showed that the at least three-storey building had been reduced to a roofless shell, with some exterior walls collapsed.

Across the city, snow flurries fell around the skeletons of burned, windowless and shrapnel-scarred apartment buildings as smoke rose above the skyline.

“We are trying to survive somehow,” said one Mariupol resident, who gave only her first name, Elena. “My child is hungry. I don’t know what to give him to eat.”

She had been trying to call her mother, who was in a town 50 miles away. “I can’t tell her I am alive, you understand. There is no connection, just nothing,” she said.

Cars, some with the “Z” symbol of the Russian invasion force in their windows, drove past stacks of ammunition boxes and artillery shells in a neighbourhood controlled by Russian-backed separatists.

Russia’s military denied bombing the theatre or anyplace else in Mariupol on Wednesday.

In Chernihiv, at least 53 people were brought to morgues over 24 hours, killed amid heavy Russian air attacks and ground fire, the local governor, Viacheslav Chaus, told Ukrainian TV on Thursday.

Ukraine’s emergency services said a mother, father and three of their children, including three-year-old twins, were killed when a Chernihiv hostel was shelled. Civilians were hiding in basements and shelters across the embattled city of 280,000.

The World Health Organisation said it has verified 43 attacks on hospitals and health facilities, with 12 people killed and 34 injured.

In remarks early on Friday, Ukrainian President Volodymyr Zelensky said he was thankful to US President Joe Biden for additional military aid, but he would not get into specifics about the new package, saying he did not want Russia to know what to expect.

He said when the invasion began on February 24, Russia expected to find Ukraine much as it did in 2014, when Russia seized Crimea without a fight and backed separatists as they took control of the eastern Donbas region.

Instead, he said, Ukraine had much stronger defences than expected, and Russia “didn’t know what we had for defence or how we prepared to meet the blow”.

In a joint statement, the foreign ministers of the Group of Seven leading economies accused Mr Putin of conducting an “unprovoked and shameful war”, and called on Russia to comply with the International Court of Justice’s order to stop its attack and withdraw its forces.

Both Ukraine and Russia this week reported some progress in negotiations. Kremlin spokesman Dmitry Peskov said on Thursday that some negotiators were breaking into working groups.

Mr Zelensky said he would not reveal Ukraine’s negotiating tactics.

“Working more in silence than on television, radio or on Facebook,” Mr Zelensky said. “I consider it the right way.”

While details of Thursday’s talks were unknown, an official in Mr Zelensky’s office told the AP that on Wednesday, the main subject discussed was whether Russian troops would remain in separatist regions in eastern Ukraine after the war and where the borders would be.

The official, speaking on condition of anonymity to discuss the sensitive talks, said Ukraine was insisting on the inclusion of one or more Western nuclear powers in the negotiations and on legally binding security guarantees for Ukraine.

In exchange, the official said, Ukraine was ready to discuss a neutral military status.

Russia has demanded that Nato pledge never to admit Ukraine to the alliance or station forces there.

The fighting has led more than three million people to flee Ukraine, the UN estimates. The death toll remains unknown, though Ukraine has said thousands of civilians have died.