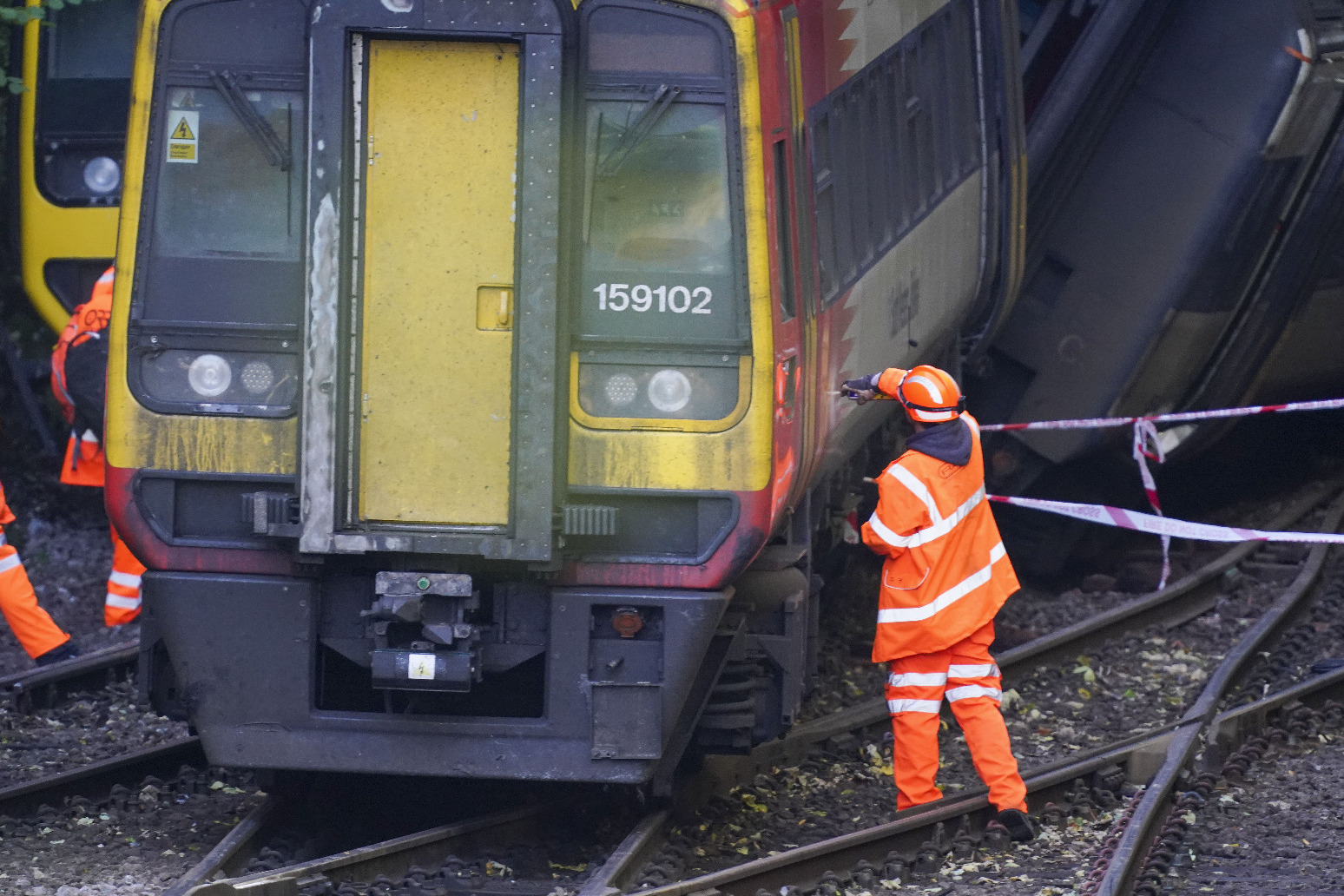 The collision happened just outside of Salisbury on Sunday

A train involved in a collision in Salisbury ran 220 metres past a stop signal before hitting a second service, investigators said.

The Rail Accident Investigation Branch (RAIB) said the 74-year-old driver of the South Western Railway (SWR) train attempted to apply the brakes before reaching the signal.

Despite him and the train’s automatic protection system also requesting emergency braking, the train did not stop until it reached the junction outside Fisherton Tunnel where it smashed into the side of a Great Western Railway service.

The RAIB said in a preliminary report that this was due to the SWR train’s wheels slipping on the rails.

The collision caused both trains to derail.

They “continued some distance” into the tunnel before coming to a stop, the RAIB said.

As part of its inquiry, the RAIB will examine how Network Rail managed the risk of “low wheel/rail adhesion” where the accident happened.

It will also consider Network Rail and SWR’s general policies towards the issue.

The SWR driver suffered what police described as “life-changing injuries”.

Thirteen passengers were treated in hospital for minor injuries.

SWR managing director Claire Mann said the driver, who remains in hospital, “reacted correctly to the signals by braking to slow the train down”.

She went on: “We believe his actions went some way to preventing a much more serious incident and we wish him a speedy recovery.”

The operator said the driver has “over 50 years’ experience of driving on this route and an excellent professional track record”.

It added that all its drivers are “regularly assessed to the highest standards and he has fully satisfied all requirements”.

Low adhesion between train wheels and rails can be particularly severe in the autumn due to leaves falling from the 13 million trees near Britain’s rail lines.

A thin, slippery layer is created when trains pass over leaves, which has a similar effect to black ice on roads.

It makes it harder for trains to accelerate and brake effectively, leading to some operators publishing special autumn timetables to allow extra time for trains to be driven more cautiously.

Martin Frobisher, Network Rail’s safety and engineering director, said on Tuesday night that the issue “affects railways across the world” and is something that the industry bodies “work hard to combat so that we can run trains safely and reliably throughout autumn”.

Disruption to services through Salisbury is expected to continue until at least the end of the day on Monday November 8.