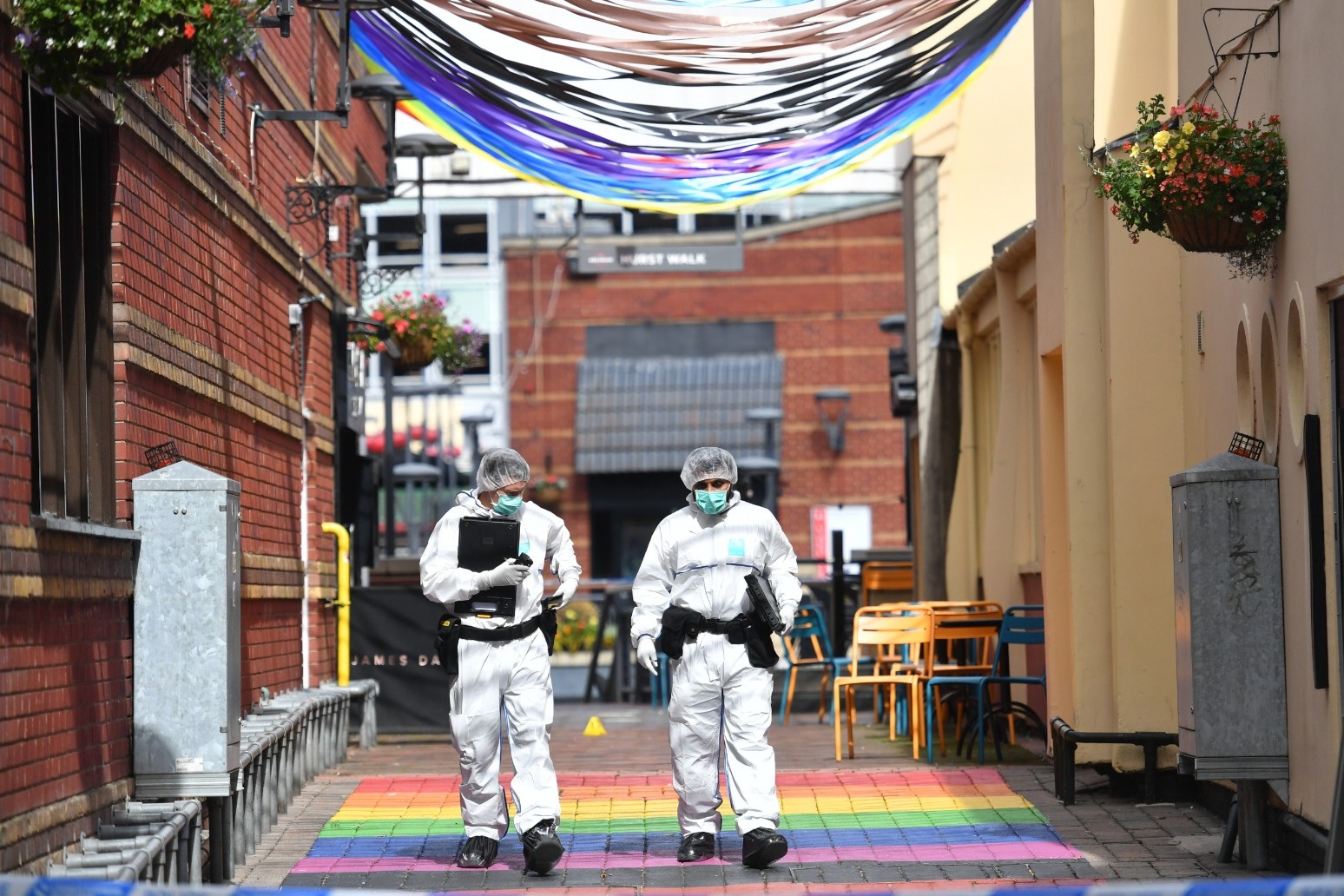 A 27-year-old man has been arrested on suspicion of murder and seven counts of attempted murder following a string of knife attacks in Birmingham.

West Midlands Police said the 27-year-old suspect was arrested at an address in the Selly Oak area of Birmingham at around 4am on Monday.

He is being held after a 23-year-old man suffered fatal injuries in one of the knife attacks.

A man and a woman, aged 19 and 32, who suffered serious stab wounds, remain in a critical condition in hospital, police said.

Following the arrest, Birmingham Police Commander Chief Superintendent Steve Graham said: “Officers worked through yesterday and into the early hours of this morning in a bid to trace the man we believe responsible for these terrible crimes.

“We issued CCTV footage of the suspect and had a strong response from the public. I’d like to thank everyone who shared our appeal and who provided information to the investigation.

“One line of inquiry ultimately led us to an address in the Selly Oak area this morning where a man was arrested.

“Clearly this is a crucial development but our investigation continues.

“We still need to speak to any witnesses who saw what happened who’ve not yet spoken to us, or anyone who may have video footage or photos of the incidents or the attacker.”

The victims were stabbed during a rampage spanning some 90 minutes in the city centre in the early hours of Sunday, leading police to declare a major incident.

West Midlands Police have launched a massive manhunt for a sole male attacker, and yesterday released CCTV footage of a man they said is wanted on suspicion of murder.

But the force is also facing criticism of their response to the attacks, including why the man was allowed to wander the city for as long as he did.

The public have been urged not to approach the man and to call 999 immediately if they recognise him.

The force said they had received a strong response from their appeal for help tracing the man, with a team of detectives working through the night to follow up new lines of inquiry.

A police hotline and website have been set up for people to pass on information.

Police said a 23-year-old man had been killed in the attacks, while a man and a woman, aged 19 and 32, suffered critical injuries.

Five other people, aged between 23 and 33, were also injured. They were treated in hospital, with two later being discharged.

In the footage released by police, the man is shown wearing a dark-coloured baseball cap and zip-up hoodie with white drawstrings.

Also wearing dark-coloured trousers and shoes, he can be seen standing and walking on a street corner.

Meanwhile, Labour MP for Perry Barr, Khalid Mahmood, has criticised police, saying the life of the deceased man could “potentially” have been saved had the police response been swifter.

“We’ve got to look at the fact (the suspect) had two hours to run around the city centre, which has a huge amount of CCTV cameras in place,” Mr Mahmood was quoted as saying by The Times.

“Where was the monitoring? Both the public and police were put at further risk. There is a person dead. How was this man able to go on a two-hour spate?”

Jay Singh Johal, the Conservative candidate for West Midlands police, was quoted by the paper as saying it was “remarkable” the police “didn’t immediately release the most important thing

and give a description for what they are looking for. That delay means this guy could be anywhere.”

Chief Superintendent Steve Graham, of West Midlands Police, said: “At this stage we believe that the attacks were random and we have no indication of a motive.

“I would urge people to remain vigilant and report any suspicious behaviour to us.

“We are appealing for anyone who recognises the man in the footage to contact us urgently.”

Mr Graham earlier told reporters that there was “no suggestion” the night’s events were linked to terrorism nor was there anything suggesting it was a hate crime or connected to city gang violence.

Police said they received the first call of the night to Constitution Hill, north of the city centre, just after 12.30am, where a man had received a superficial injury.

This was followed by a further call 20 minutes later to nearby Livery Street, next to Snow Hill railway station. A 19-year-old man was critically injured and a woman was also injured.

An hour later at 1.50am, officers were called to Irving Street, to the south of the city centre, where a man died and another man suffered serious injuries.

Ten minutes later police were called to Hurst Street, in the heart of the city’s Gay Village quarter, where a 32-year-old woman was seriously injured and two men received lesser injuries.

West Midlands police and crime commissioner, David Jamieson, earlier called the assaults “disturbing”, with the violence enfolding as revellers had been enjoying the night.

Savvas Sfrantzis, who owns Mykonos bar and grill in Hurst Street, said he witnessed a woman being repeatedly stabbed, just across the street, after he was alerted by her screams.

He said: “I looked at him, facing him, and I can see he had a blade, small, not very big, and he was stabbing her in the neck.”

He described how the attacker was “so cold”, walking calmly away and “smirking”, while other bar staff bravely tried to follow him.

When he was earlier asked by reporters how he could say the city was safe with the alleged attacker still at large, Mr Graham said West Midlands Police had “a significant presence” of officers, armed and unarmed, if the suspect was sighted.

Asked how the knifeman was able to move through the city centre without being caught, Mr Graham described the suspect’s route through Birmingham as “relatively unusual”.

He later added: “We do not underestimate the impact that these incidents have had on the city of Birmingham today.

“We declared this a major incident at the earliest opportunity and we have drafted in scores of officers to help with the investigation and patrol the city to reassure residents and visitors that we are doing all we can to apprehend the person responsible.”

Police said extra officers had “flooded” the city centre on Sunday, with four scenes being held and examined by forensic experts throughout the day.

In Edmund Street, a black-handled serrated kitchen knife was recovered from a drain, but Mr Graham said it was “too early” to link it to the attacks.