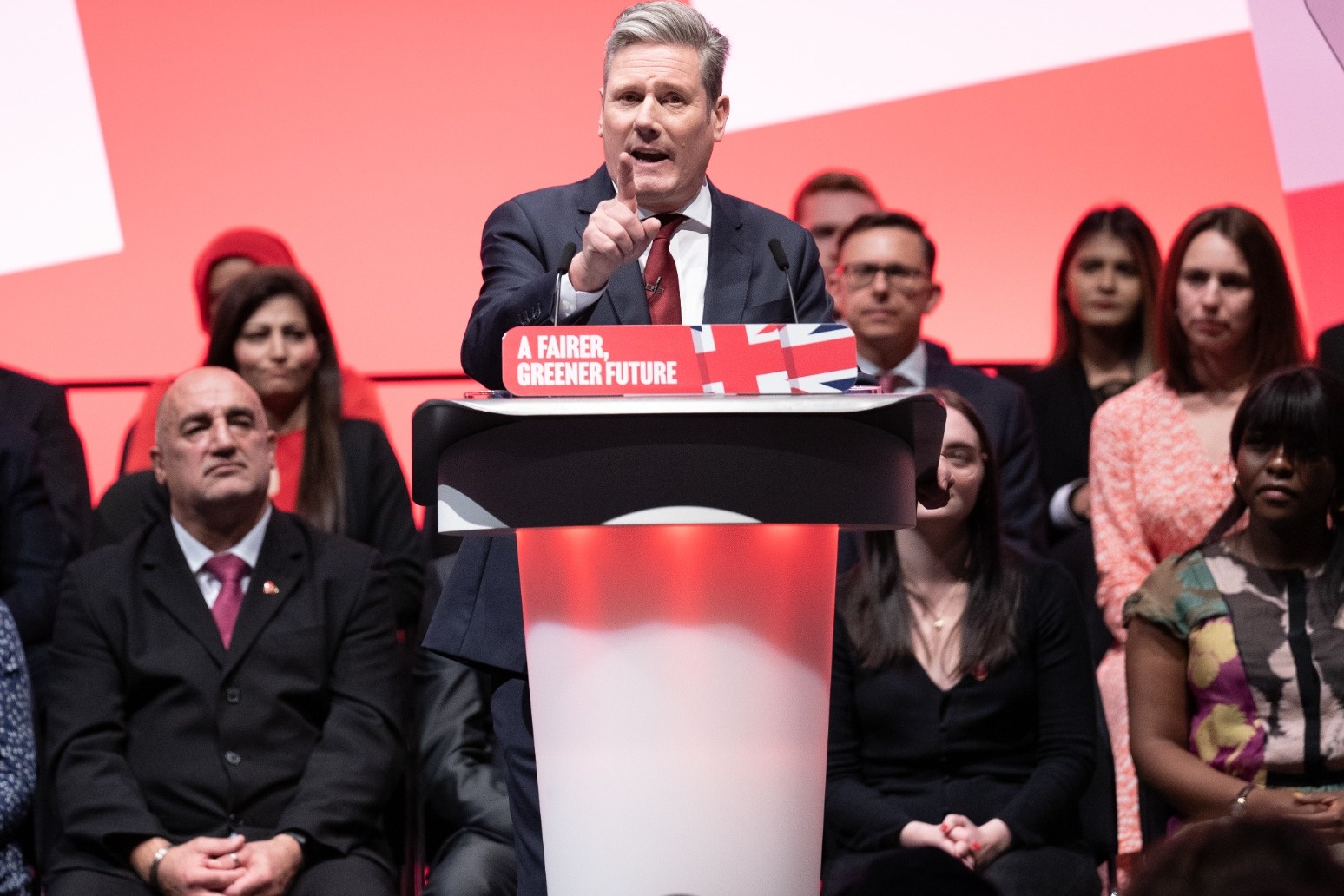 Sir Keir Starmer said he could make Britain “stand tall again”, promising a new state-owned energy firm to help create a “fairer, greener, more dynamic nation” if the Tories are ousted at the next election.

He said Liz Truss’s Government should not be forgiven for the market turmoil unleashed since Friday’s mini-budget, and promised Labour would “restore our sense of collective hope”.

The Labour leader told activists the Government had crashed the economy to offer tax cuts for the richest 1% in society.

He said they had left a “Britain all at sea, where a cloud of anxiety hangs over working people”.

The Labour leader said: “At moments of uncertainty like this we must provide clear leadership.

“We must stand with working people. Meet their ambitions for real change. Walk towards a better future and build a new Britain, together.”

He said the Government had “lost control of the British economy” and “crashed the pound”.

“Higher interest rates. Higher inflation. Higher borrowing. And for what?

“Not for you. Not for working people. For tax cuts for the richest 1% in our society.

The Labour leader said the Tories “haven’t just failed to fix the roof, they’ve ripped out the foundations, smashed through the windows and now they’ve blown the doors off for good measure”.

He promised a Labour government would “get us out of this endless cycle of crisis” with a “fresh start, a new set of priorities and a new way of governing”.

Sir Keir said the war in Ukraine was not to blame for the way the Tories had left the UK unprepared for the economic fallout and soaring energy bills.

The country had been left with Sweden owning the largest onshore wind farm in Wales, the Chinese Communist Party having a stake in our nuclear industry and “five million people in Britain pay their bills to an energy company owned by France”, Sir Keir told delegates.

In response, Labour would set up Great British Energy within its first year in office to “take advantage of the opportunities” in clean power.

“The future wealth of this country is in our air, in our seas, in our skies. Britain should harness that wealth and share it with all.

“British power to the British people.”

He was scathing about the state of the nation after 12 years of Conservative rule.

Sir Keir said he was “really worried about how many lives are at risk this winter” with the NHS “face down on the floor”, according to one medic.

“If it’s a choice between a tax cut for those earning hundreds of thousands of pounds, or supporting our NHS, that is not a hard choice for us – Labour will always deliver for the NHS.”

Sir Keir said parents feared their children would not have a better life than them and an “unwritten contract has been broken” where in return for hard work people could get on in life.

“That’s the deep cost of Tory failure. They keep talking about aspiration but they don’t understand how they’ve choked it off for working people,” he said.

Labour has been buoyed by opinion polls in recent days, with a YouGov survey suggesting the party has opened up a 17-point lead over the Conservatives, and Sir Keir stressed how much the party had changed under his leadership to make it “fit to serve our country” – in a swipe at Jeremy Corbyn’s record.

“That’s why we had to rip antisemitism out by its roots,” Sir Keir said.

“Why we had to show our support for Nato is non-negotiable. Show we want business to prosper. Shed unworkable policies.

He also sought to win back voters who had deserted Labour over Brexit – including those in the Red Wall seats in northern England who helped Boris Johnson win his 2019 landslide.

“I want to speak directly to the people who left Labour on this issue. Whether you voted Leave or Remain, you’ve been let down,” he said.

“If you voted to take control of your life and for the next generation to have control of theirs, then I say to you: that is what I will deliver.”

He promised to help make sure “we buy, make and sell more in Britain”, to “control immigration using a points-based system” and “use the power of government to help working people succeed”.

Overturning the 80-seat majority won by Mr Johnson in 2019 is a tall order and Labour may be forced to rely on other parties for support in the event of a hung parliament.

But Sir Keir insisted he would not do a deal with Nicola Sturgeon’s Scottish National Party.

With the next election expected in 2024, Sir Keir warned “the next two years will be tough” with the Tories “getting desperate” and likely to “lash out”.

“We need to be prepared, disciplined, focused,” he told activists, adding that Labour should “meet their attacks with hope” and “provide the leadership this country so desperately needs”.