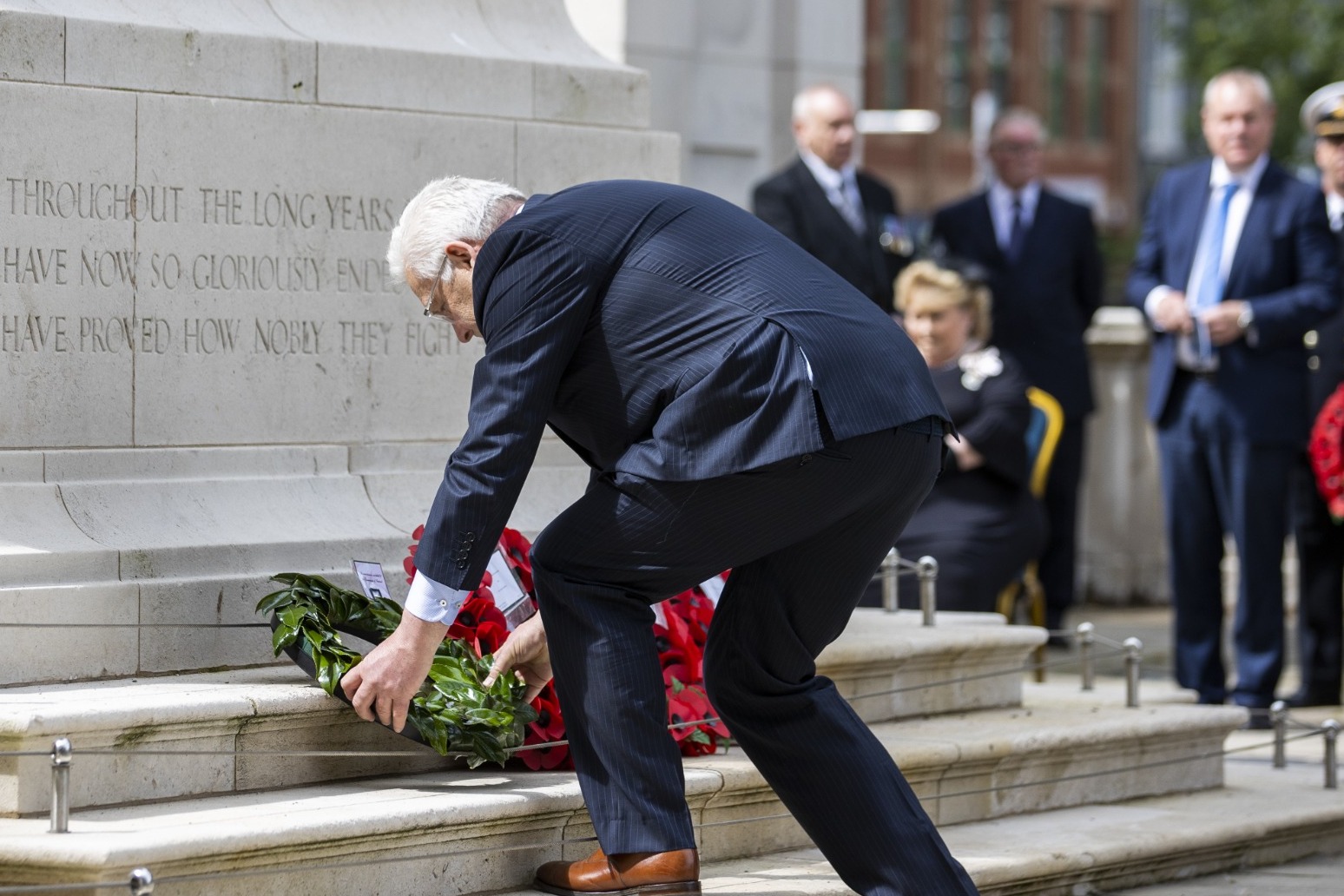 Sinn Fein’s vice president has said that laying a wreath to mark the Battle of the Somme sends out a strong message that she wants to be a leader for all in Northern Ireland.

While Sinn Fein lord mayors in Belfast have laid laurel wreaths on the anniversary of the First World War battle in previous years, Friday was the first occasion a member of the party’s leadership has taken part.

Ms O’Neill joined current Sinn Fein Lord Mayor Tina Black to lay a wreath on Friday morning, two hours ahead of the official commemorative event marking the first day of the battle in 1916.

The anniversary is steeped with historical significance for the unionist community in Northern Ireland.

The two republican politicians stood in silence in front of the Cenotaph at City Hall after laying the wreath for those who died.

However, DUP MP Gavin Robinson suggested there should be no need for “segregated commemoration” in Northern Ireland, questioning why Ms O’Neill had not gone to the main event.

Sinn Fein has previously cited such British military trappings in explaining why it continues to stay away from such commemorative events in Northern Ireland.

Ms O’Neill, who will be entitled to be nominated as first minister when and if powersharing is resurrected, said her actions on Friday proved her commitment to work for everyone in society.

The Battle of the Somme was one of the largest and bloodiest battles of the First World War.

It saw the 36th Ulster Division and the 16th Irish Division, representing the two main traditions from the north of Ireland, distinguish themselves, but at a great cost.

The battle has assumed major symbolic significance for unionists in Northern Ireland.

“I said throughout the election campaign that I wanted to be a first minister for all and I hope that today’s attendance and the laying of a wreath is actually a demonstration of someone who wants to work for all in our community,” Ms O’Neill told reporters on Friday.

“I think as political leaders, we have a responsibility to reach beyond our comfort zones and actually reach out the hand of friendship, and to try to do whatever we can in terms of leadership in terms of healing the wounds of the past.

“So, I’m very pleased to be here this morning to have laid a wreath in terms of all those lives lost.”

Last July, the then deputy first minister joined then first minister Paul Givan of the DUP at the Irish National War Memorial at Islandbridge in Dublin to remember those who fell at the Somme.

That was then the first time the Sinn Fein politician had attended a Royal British Legion wreath-laying ceremony.

Ms O’Neill declined to be drawn on Friday when asked why she was prepared to attend an official event in Dublin but not in Belfast.

“I don’t think we should get distracted from the fact that this is quite significant, the fact that I have laid a wreath this morning, along with our mayor Tina Black,” she said.

She added: “I hope that sends out a strong message that I do genuinely want to lead for everybody in this society.”

Ms O’Neill also was not drawn on whether Sinn Fein would consider attending official Somme commemorations in Belfast in the future.

Asked whether she felt her gestures were being reciprocated by political unionism, she said: “What I’m doing today is not about reciprocation, it’s actually about demonstrating respect and my leadership, and what I’m determined to do, regardless of what others decide to do.”

“I think it’s good that she did attend today,” he said.

“I think we should recognise that Sinn Fein breached that barrier 20 years ago, with (former Belfast mayor) Alex Maskey first attending the Cenotaph here and recognising the sacrifice at the Somme.

“I think it would be nice to get to the point where we could share in this commemoration today – that individuals, political leaders didn’t need to segregate themselves from the commemoration that took place.”

He said the sacrifice of those who died at the Somme was shared between communities, and so the commemoration should be shared too.

He said: “I don’t want to be churlish about it. I think it is good that she was here today. But I think the time has passed that we need to segregate ourselves in commemoration.”

“The First World War was an event, an experience, a number of years in which people from across this island from both traditions died in fighting for freedom,” he said.

“It’s right, I think, that we remember that. I understand from my late grandmother that she had cousins who were from Dublin who died fighting for the British in the First World War.

“So, this is a shared remembrance, a shared sense of loss and a shared history on this island. I welcome that profoundly.”