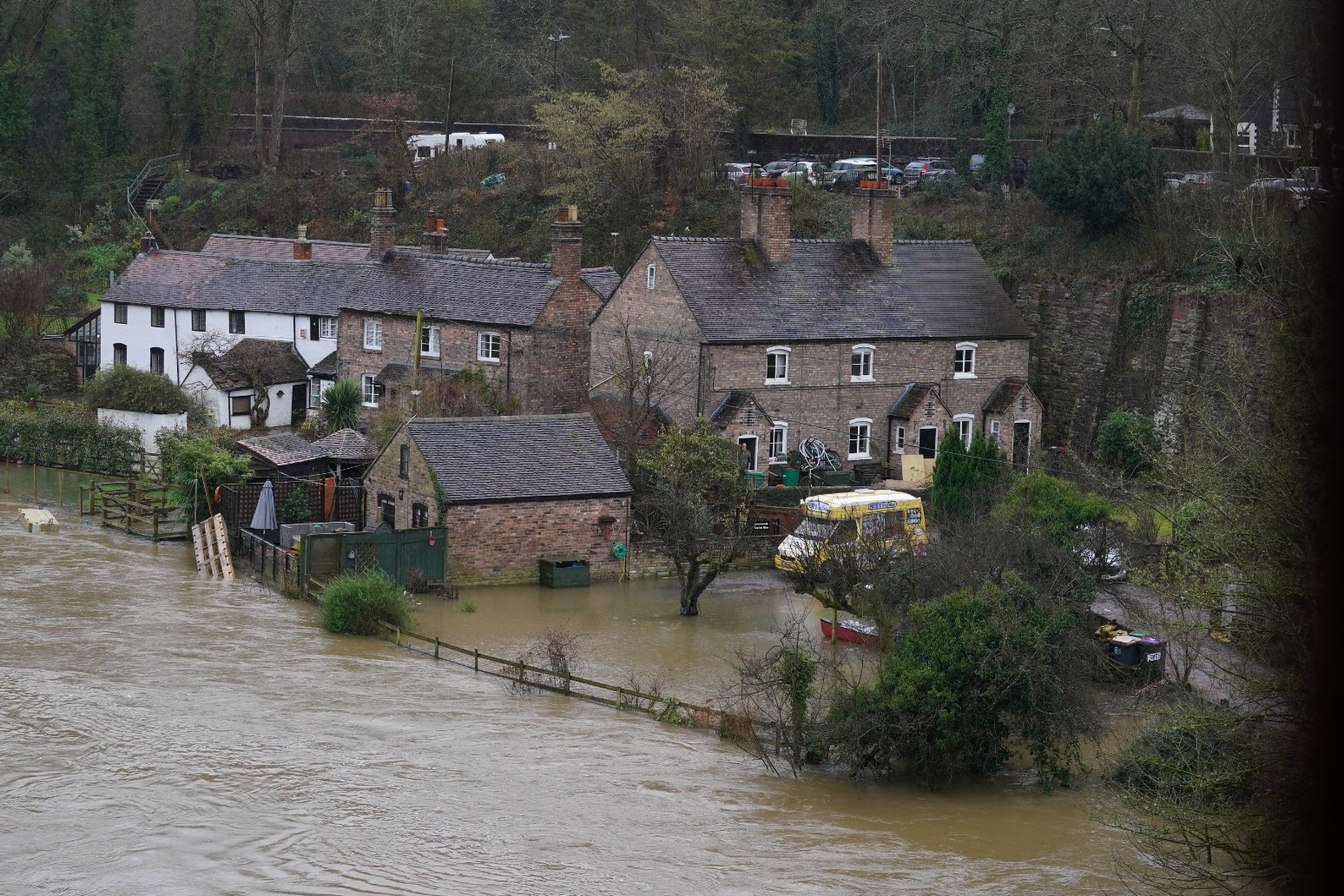 Strong winds have already caused chaos across the UK, from huge waves battering coastlines to prolonged power cuts and the destruction of homes.

The Met Office has issued an amber warning for wind which could cause “travel delays, road and rail closures, power cuts and the potential risk to life and property” in Northern Ireland from midnight until 7am on Monday.

Milder yellow warnings for wind cover England, Wales and the south-western edge of Scotland for midday until 3pm on Sunday, and for the same period on Monday.

Environment agencies have also issued hundreds of alerts for flooding across the UK, including two “severe” warnings where rainfall could cause a “danger to life” for communities along the River Mersey in Greater Manchester.

In Derby, firefighters from three locations were called to Wilson Street at 4.15pm after a roof blew off a terraced house, causing damage to five other properties.

The River Severn has been threatening to burst its banks, with water creeping towards homes in Ironbridge, Shropshire, and emergency teams have erected flood barriers along some sections of the waterway.

Met Office meteorologist Becky Mitchell said Storm Franklin is set to bring even stronger winds from midnight, and its coming marks the first time three named storms have occurred in such quick succession for at least seven years.

She told the PA news agency: “This is the first time we have had three named storms within a week, and we started the storm naming system in 2015.

“At the moment we’ve got a really active jet stream, which is why we’re seeing so many storms track right towards the UK.

“We had Dudley on Wednesday, Eunice on Friday and Franklin today.”

Ms Mitchell said there will “definitely be some impact” from Storm Franklin but it is not expected to be “as severe” as Eunice because the strongest winds will be confined to the coast.

Gusts of 60-70mph are predicted to hit inland Northern Ireland in the early hours of Monday morning, while 80mph speeds are expected on the coast.

Strong winds are also expected in England and Wales on Sunday afternoon, with 60mph gales predicted inland and 70mph in coastal areas.

Ms Mitchell warned of “treacherous conditions” and up to 80mm rainfall for north-west England, which is covered by a double warning for wind and rain from midday until 3pm on Sunday.

She said: “There will be really intense rainfall in the North West – torrential downpours for a short time.

“We’ve got something developing called line convection today, which is where you see a really intense downburst of rain which could bring some intense winds with it as well.”

Ms Mitchell said although this week’s weather “cannot be attributed specifically to climate change”, the warming of the planet is causing “more intense and more frequent winter storms in the UK”.

As of 2.30pm on Sunday, the Environment Agency had issued two rare “severe” flood warnings in Didsbury and Northenden in Greater Manchester, which means there is a “danger to life”.

Katharine Smith, flood duty manager at the Environment Agency, urged people to “stay away from swollen rivers” while teams deploy temporary barriers and pumps on the river.

“We are urging people to remain vigilant and take extreme care following the impacts of Storm Eunice, and with a further storm, Franklin, on the way,” she said.

“Heavy rain, affecting already wet areas, is likely to cause significant river flooding in parts of the north of England today and tomorrow.

“We advise people to stay away from swollen rivers and not to drive through flood water as just 30cm of flowing water is enough to move your car.

“Residents close to the River Mersey are being warned to take immediate action and prepare for property flooding.”

On Friday, Storm Eunice caused what energy providers believe was a record national outage over a 24-hour period, and some 56,000 people were still without power on Sunday afternoon, according to the Energy Networks Association (ENA).

Ross Easton, director of external affairs at the ENA, said 8,000 engineers are working to reconnect customers in a huge national effort, but many homes will still be without power next week.

Mr Easton told PA: “With Storm Franklin now named, it is a concern to us in terms of those reconnection efforts because the job involves sending engineers out to climb electricity poles to reconnect wires.

“You wouldn’t want friends and family out in some of the weather conditions we’re seeing – we’ve got to make sure that our colleagues are safe first and foremost.

“We’re still making pretty good progress in terms of reconnections, but it’s certainly being hampered by the high winds.”

Mr Easton added that customers in the South West and South East of England “where we saw houses crushed and trees coming down” amid Storm Eunice are likely to be the last to have their connections restored.

“It won’t be today for everyone to be reconnected,” he said.

“The number (of outages) will keep coming down, but it does mean unfortunately that customers in more rural areas and areas that have been hit the worst by the weather will be off-grid for longer.”

Giving advice to those facing a third night without power, Mr Easton said: “First and foremost, check on friends, family, and neighbours to make sure they’re safe and well, and if you have any concerns or need extra support, call your local network operator.”

“In total, 1.35 million customers have been reconnected.

“UK Power Networks (SE + E England) is receiving mutual aid from other network operators across the UK to bolster their restoration efforts.”

National Rail has warned of “major disruption” affecting train journeys “across most of Great Britain” on Sunday.

Some 23 flood warnings and seven alerts have been issued across the Scottish Borders, Ayrshire, Orkney and the Western Isles by the Scottish Environment Protection Agency.

Natural Resources Wales has issued 18 flood warnings and 35 alerts covering much of the country.