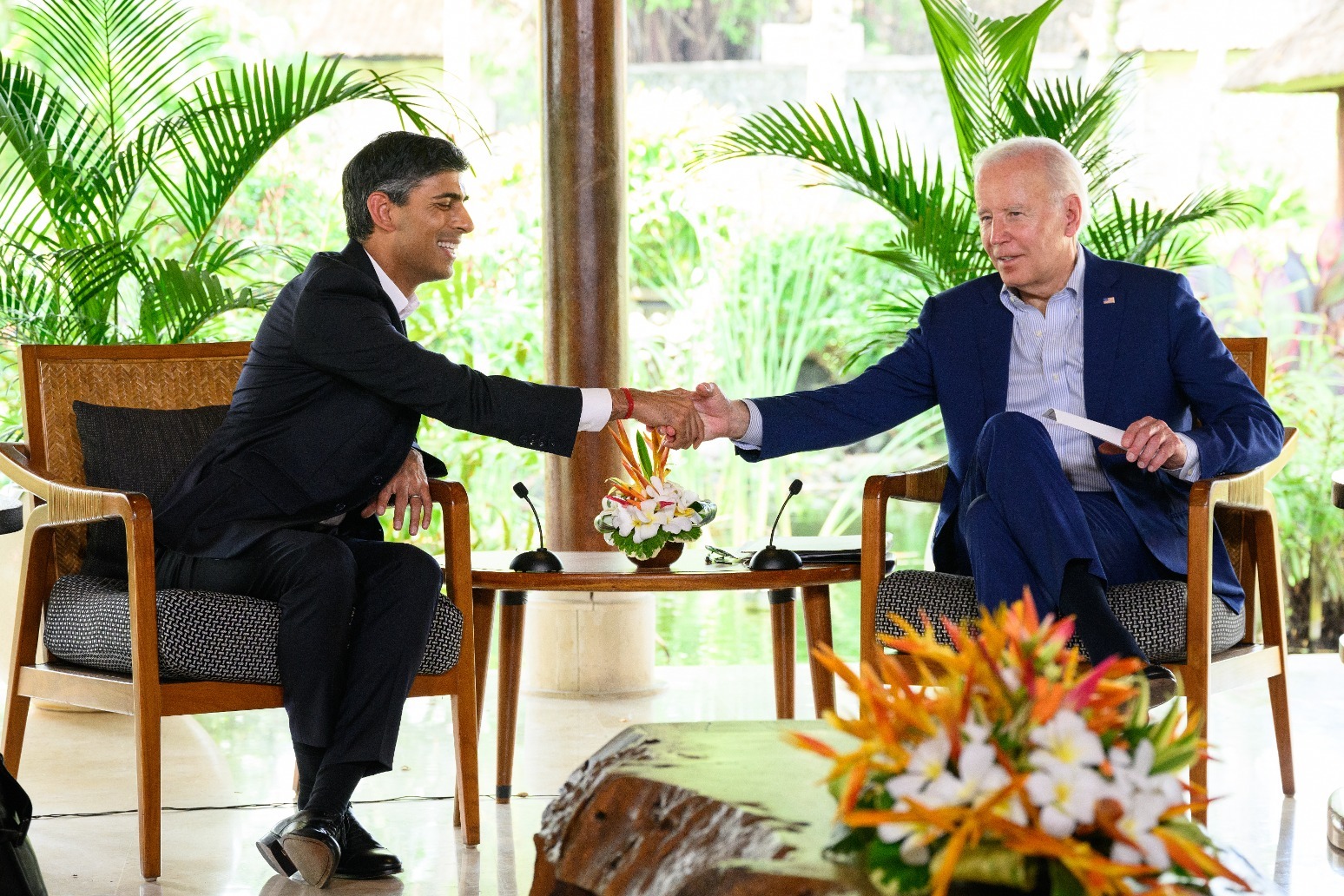 Rishi Sunak said a global economic crisis was being driven by Vladimir Putin’s war in Ukraine after a G20 summit dominated by the fallout from the conflict.

The Prime Minister, who held talks with world leaders including Joe Biden on the final day of the gathering in Bali, Indonesia, said “the persistent threat to our security and global asphyxiation has been driven by the actions of the one man unwilling to be at this summit”.

His discussions with the US President touched on the situation in Northern Ireland, with the Prime Minister hoping the post-Brexit issues there can be resolved by the 25th anniversary of the Good Friday Agreement next year, but did not cover the prospect of a transatlantic trade deal.

Mr Biden, who is proud of his Irish ancestry, has taken a keen interest in the situation around the Northern Ireland Protocol, the post-Brexit trading arrangement which the UK Government is seeking to fundamentally reshape.

Asked if the US president raised concerns about the Northern Ireland Protocol Bill, the Prime Minister’s press secretary said: “Not specifically, no”.

Pressed on whether he did about the Northern Ireland situation in general, she said: “Yes.”

“They both expressed their commitment to protecting the Good Friday Agreement,” she said.

She added that the Prime Minister “expressed his desire to get a negotiated settlement and to ensure that the Good Friday Agreement is protected.”

The White House readout of the meeting said the two leaders “affirmed their shared commitment to protecting the gains of the Belfast/Good Friday Agreement”.

The UK’s stance on the protocol is one of the factors which have led to stalled progress on a trade deal with Washington.

Mr Sunak confirmed that he and Mr Biden did not discuss a trade deal “in particular” during their meeting, they did talk about the “economic partnership” between the two nations.

But talks between leaders at the G20 were overshadowed by the latest wave of Russian strikes on Ukraine and the circumstances around an explosion in Nato member state Poland which caused two deaths.

While Russia is a member of the G20, Mr Putin was absent – although foreign minister Sergei Lavrov led the country’s delegation.

The summit’s closing communique stated that “most members strongly condemned the war in Ukraine” but “there were other views and different assessments of the situation and sanctions”.

The crisis following the incident in Poland saw carefully-prepared schedules torn up, resulting in the cancellation of a planned meeting between Mr Sunak and China’s Xi Jinping.

Mr Sunak had been expected to use the meeting to call for a “frank and constructive relationship” with Beijing while also raising its human rights abuses, Downing Street said.

The Prime Minister had been warned by critics that he could be seen as “weak” for “drifting into appeasement with China”, after he appeared to soften his rhetoric to declare the country a “systemic challenge” rather than a “threat”.

But Commons Foreign Affairs Committee chairwoman Alicia Kearns said it was “a shame” the meeting had been cancelled.

“Dialogue is vital to prevent miscalculations, and is not a sign of weakness,” she said.

“The trust deficit is palpable at this time, and meeting was important to set out our positions and build the ground to prevent miscalculations.”