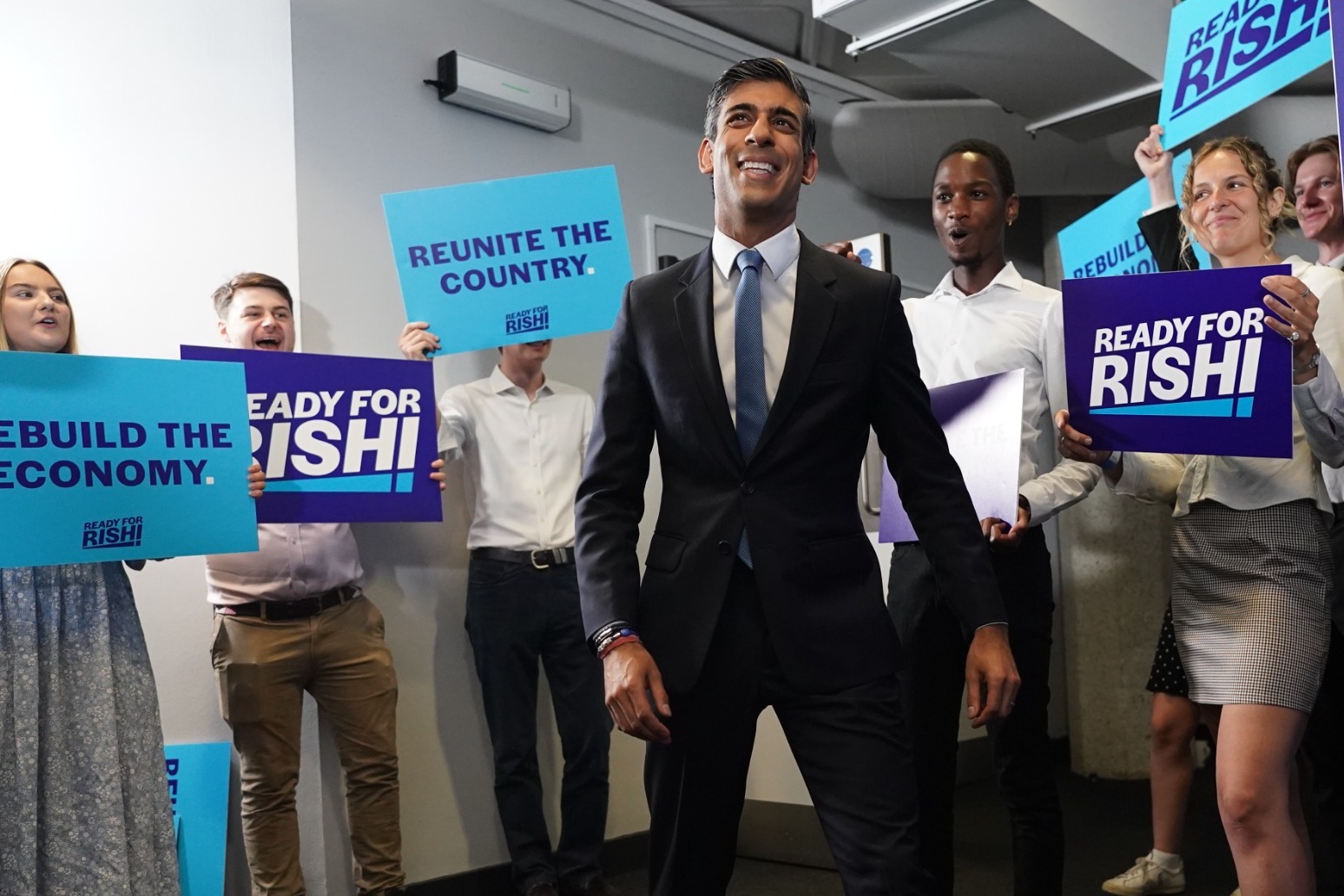 Rishi Sunak has pledged to cut taxes only when inflation is under control, in contrast to rivals’ “fairytales”, as Boris Johnson’s loyalists worked to oppose the former chancellor.

Brexit opportunities minister Jacob Rees-Mogg and Culture Secretary Nadine Dorries came out on Tuesday in support of Foreign Secretary Liz Truss for the next prime minister.

Transport Secretary Grant Shapps pulled out of the leadership race as he struggled to win the required nominations before the cut-off, and announced his support for Mr Sunak.

After being welcomed to the stage by Mr Raab, the former chancellor told his official campaign launch that tax cuts are “a question of when, not if”.

But he said it is “not credible to promise lots more spending and lower taxes”, in a swipe at rivals who have proposed multibillion-pound tax cuts immediately.

Instead Mr Sunak, one of the frontrunners in the campaign for the Tory leadership, said he would only cut taxes “once we’ve gripped inflation”.

“We need a return to traditional Conservative economic values and that means honesty and responsibility, not fairytales,” he said.

Mr Sunak acknowledged he had “frequently” disagreed with Mr Johnson but said he would not “demonise” the man expected to remain caretaker Prime Minister until after a successor is announced on September 5.

Leadership rival Nadhim Zahawi, the current Chancellor, criticised his predecessor’s hesitancy, insisting it is not a “fairytale” to cut taxes to ease the cost-of-living crisis.

It was another dramatic day in Westminster as contenders sought to win the 20 nominations from Tory MPs by 6pm in order to make the next round, under the newly-hastened timeline.

– Former equalities minister Kemi Badenoch launched her bid, vowing not to enter a tax cut “bidding war” and arguing others had been trying to “have your cake and eat it”.

– Senior backbencher Tom Tugendhat promised to slash fuel duty by 10pm as he launched his campaign, dismissing rivals’ criticism over his lack of ministerial experience.

– Jeremy Hunt pledged to cancel “unthinkable” planned cuts to the size of the Army in the face of Vladimir Putin’s threat and raise defence spending to 3% of national income by 2028.

– Mr Zahawi brushed off a rebuke from Bank of England governor Andrew Bailey for setting out tax proposals during the campaign, saying he was setting out his stall to be the next prime minister and his plans were “fully costed”.

Education Secretary James Cleverly and other Johnson loyalists came out in support of Ms Truss, who was being seen as a “stop Sunak” candidate.

Ms Dorries told reporters in Downing Street that Ms Truss, who voted Remain in the 2016 referendum, is probably a “stronger Brexiteer than both of us” and has “consistently argued for low tax policies”.

But Mr Shapps, struggling to get the nominations required, pulled out of the race to back Mr Sunak, saying he “has the competence and experience to lead this country”.

By Tuesday morning, trade minister Penny Mordaunt, Mr Sunak and Mr Tugendhat looked to have the declared backers to make the threshold for the next stage.

Several others – including Ms Truss, Mr Zahawi, Mr Hunt and Ms Badenoch – were close enough before nominations formally opened to suggest they will be in the race.

Insiders from Sajid Javid’s campaign were also confident of making the cut, as were allies of Suella Braverman.

Backbencher Rehman Chishti’s low-key campaign did not appear to have caught the imagination of his colleagues and he looks likely to fall at the first hurdle.

With the most public declarations of support so far, Mr Sunak is alone among the contenders not promising immediate tax cuts if he wins.

He has come under attack from allies of the Prime Minister, who are embittered by his resignation last week that helped trigger the cascade of resignations that forced Mr Johnson to admit his time is up.

In the past, Mr Rees-Mogg has described Mr Sunak scathingly as the “much-lamented socialist chancellor” who put up taxes while failing to curb inflation.

Under the campaign timetable set out by 1922 Committee chairman Sir Graham Brady, the pack will first be slimmed down after the initial nomination deadline on Tuesday evening.

Then, the first ballot of MPs will take place on Wednesday, with candidates failing to get 30 votes being eliminated, with a second expected on Thursday.

The process is then likely to continue into next week, with candidate with the lowest vote dropping out, until the list of candidates is whittled down to just two – who will go forward into a ballot of party members.