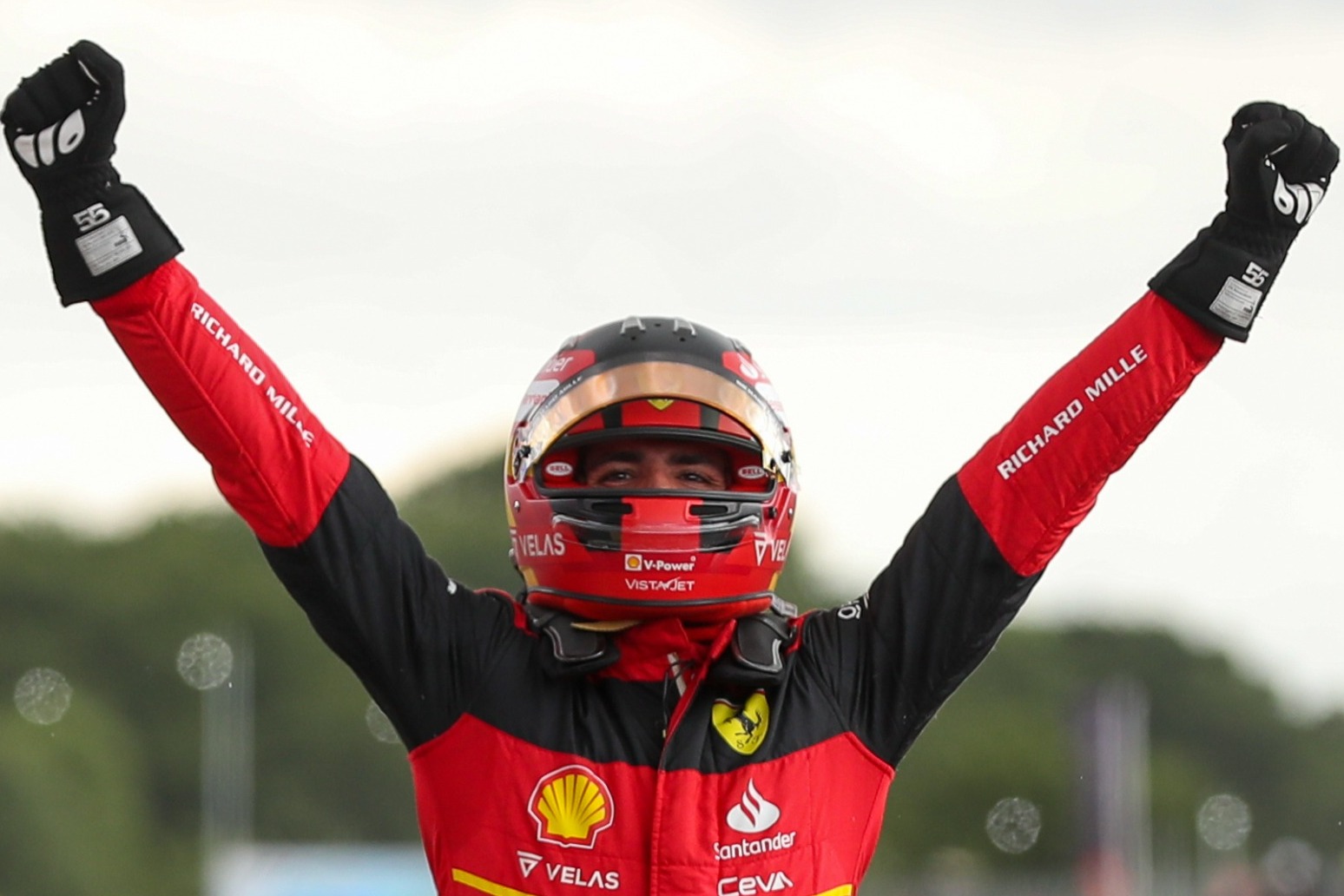 Ferrari’s Sainz took his maiden F1 victory at his 150th attempt – beating Red Bull driver Sergio Perez and home favourite Lewis Hamilton in a frenetic climax to the race of the season in front of a record 142,000 fans at Silverstone.

But the 10th round of the campaign will be remembered for a jaw-dropping accident involving Chinese rookie Zhou.

Six seconds after the lights went out, Pierre Gasly made contact with George Russell. The British driver then tagged the right rear of the Zhou’s machine at 160mph, flipping him on to his roof and sliding out of control.

Upside down, Zhou continued through the gravel at high speed with sparks flying before he slammed into the tyre barrier, and was launched into the catch fencing. Fans and photographers ducked for cover with Zhou’s Alfa Romeo then lodged on its side.

As the red flags were deployed, an extraction team rushed to Zhou, but minutes passed without update as the television cameras cut away from the scene of the accident.

The 23-year-old was carefully removed from his terrifying ordeal, and taken away in an ambulance to the medical centre. Remarkably, just one hour and 45 minutes later, Zhou was declared “fit” before returning to the paddock.

He tweeted: “I’m ok, all clear. Halo saved me today. Thanks everyone for your kind messages.”

Both drivers escaped unhurt with the halo – the cockpit protection device which sits above the driver’s head, introduced to top-level motorsport in 2018 – absorbing the impact.

“First of all, I took the decision not to see the accident,” said Sainz. “When the red flag happened I knew there must have been a big shunt but I didn’t watch the TV.

“I was incredibly happy to see Zhou come out of the car without major issues, and when I saw what happened after the race I was completely shocked. It was incredible. The fact he came out of it is crazy.

“We sometimes criticise the FIA but you have to give it to them how much they have helped us, and the accident in Formula Two, too.

“Today the FIA has saved two lives and we need to give it to them, the amazing work they are doing in safety.

“You guys cannot imagine the speed we are doing in high speed, changing direction, and knowing we can do it safely. I thank them for this, and I love the sport for that.”

Perez added: “It has been a while since we have seen an accident like that. It is hard to see it, and then delete it from your mind and try to focus.

“When you hear people talking about a driver salary cap in Formula One, we are the ones putting ourselves at risk so I don’t think it is a real thing to be talking about that. The most important thing today is that nobody got hurt.”

Former FIA president Jean Todt later tweeted: “Glad I followed my convictions in imposing the Halo, despite a strong opposition!”

London-born Alex Albon was caught up in the first-lap accident and he was taken to Coventry Hospital for precautionary checks before being released on Sunday night. Esteban Ocon and Yuki Tsunoda were also involved but limped back to the pits for repairs.

Russell, 24, who was unable to take part in the restart, was seen leaping out of his stationary Mercedes cockpit and charging first to check on the condition of his close friend Albon and then Zhou.

“It was the scariest thing I’ve seen in my life,” said Russell of the Alfa Romeo driver’s accident. “It was horrible. He was stuck there and there’s nothing he could do.”

The race was suspended for nearly an hour – with Sainz, who earlier surrendered his lead to Max Verstappen and team-mate Charles Leclerc, blitzing a 10-lap dash to the chequered flag following a late safety car period on fresh rubber to win.

Leclerc, on old tyres, fell from first to fourth on a disappointing afternoon for the Monegasque, given Verstappen limped home in seventh after he sustained an early puncture. Verstappen leads Perez by 34 points in the standings, with Leclerc a further nine back.