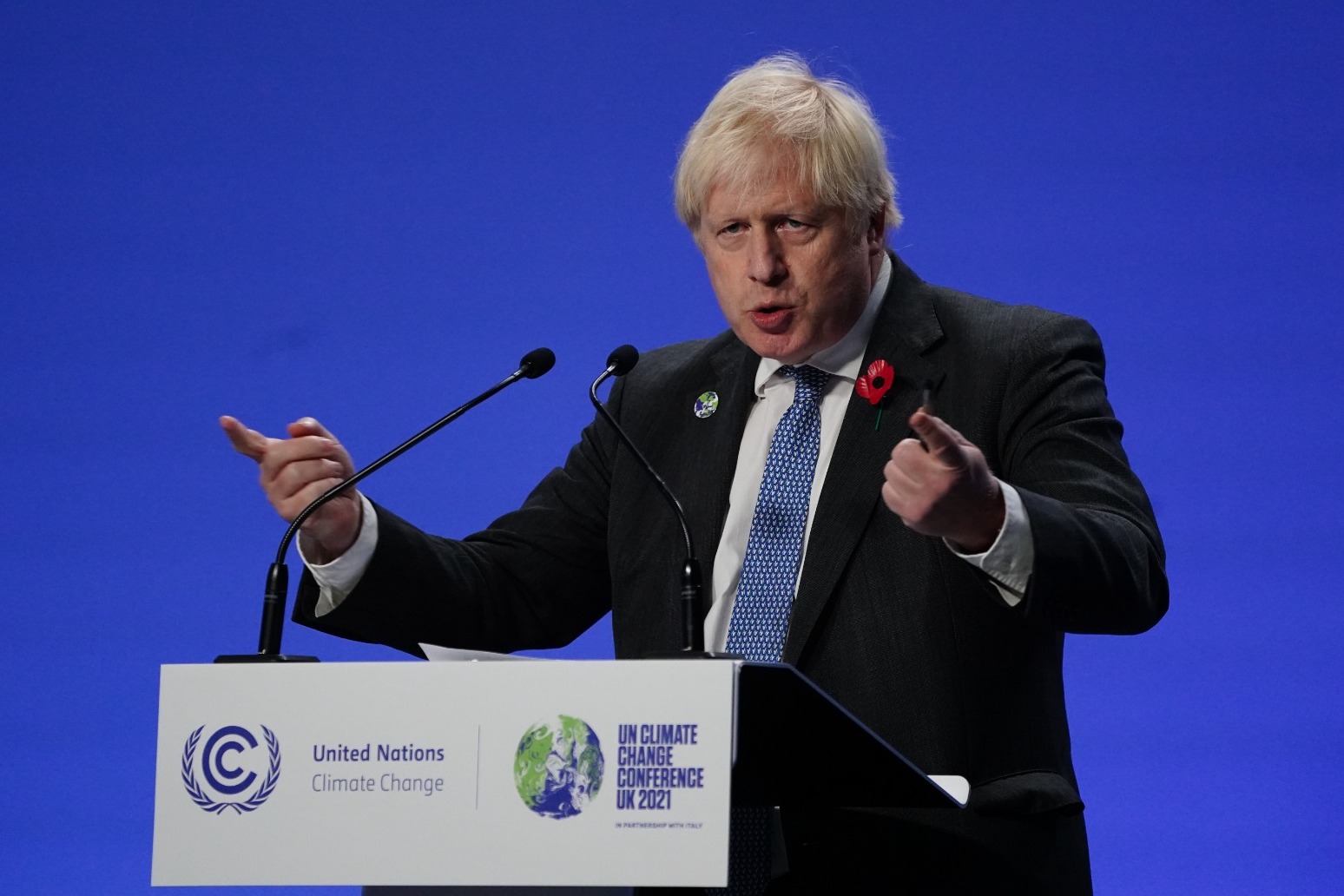 Boris Johnson has appealed to other leaders not to sit on their hands as the world asks for action on climate change at the Cop26 talks.

The Prime Minister said there had been a “surge of really positive game-changing announcements” in areas such as finance and forests in the first week of the talks, but warned the negotiations were now tough.

The Cop26 conference “is not going to fix” climate change in one go, Mr Johnson warned, but it could come away with “the first genuine road map for a solution to anthropogenic climate change that I can think of in my lifetime”.

He warned that a failure to deliver would create a huge – and deserved – backlash.

Mr Johnson returned briefly to the summit in Glasgow on Wednesday as a draft of a deal that could be agreed was published.

He is heading home again in the face of calls from First Minister Nicola Sturgeon to stay in Glasgow until a deal was struck, and from shadow business secretary Ed Miliband, who said he should “stay and fight” for strong action with private diplomacy and public argument.

The draft of the agreement urges countries to “revisit and strengthen” the targets for cutting emissions by 2030 in their national plans to align them with the temperature goal in the international Paris Agreement of keeping warming “well below” 2C and trying to keep it to 1.5C.

The document published on Wednesday also urges countries to set out long-term strategies by the end of next year to reach net-zero emissions by about mid-century.

It includes a call for developed countries to at least double their collective provision of climate finance to help developing countries adapt to climate change, as part of scaling up finance for poorer nations to tackle the crisis, and to address loss and damage caused by increasingly extreme weather.

The draft decision also calls for faster phasing out of coal and subsidies for fossil fuels – a first for a UN deal – but there is likely to be strong resistance to this from some countries and it could be taken out of any final agreement.

Quizzed on whether the UK would support a bid by Denmark and Costa Rica, to be announced on Thursday, to phase out oil and gas, the Prime Minister did not rule it out – saying he wanted to move beyond hydrocarbons completely in the UK.

He said: “We’ll look at what Denmark and Costa Rica are proposing, and I would certainly encourage everybody to move beyond coal and beyond hydrocarbons.”

He said: “Here in Glasgow the world is closer than it has ever been to signalling the beginning of the end of anthropogenic climate change. It is now within reach.”

“At Cop26 in these final days we just need to reach out together and grasp it”.

He challenged other leaders, “will you help us grasp the opportunity or will you stand in the way?”, urging them to pick up the phone to their negotiating teams and give them the margin they needed to manoeuvre and get a deal done.

He reminded leaders of the searing speech by Barbadian PM Mia Mottley at the beginning of the talks, warning of the risk posed to her country from rising temperatures.

“If you stood and applauded her then, you cannot now sit on your hands as the world asks you to act,” he said.

Scientists have warned that keeping temperature rises to 1.5C requires global emissions to be cut by 45% by 2030, and to zero overall by mid-century – but countries’ plans for this decade leave the world well off track.

New analysis warned existing plans up to 2030 put the world on track for 2.4C of warming – well above the goals internationally agreed in the Paris accord to curb temperature rises to “well below” 2C and try to limit them to 1.5C.

Mr Johnson said the securing of the Paris Agreement in 2015 “was a significant moment in the fight against climate change, but it was ultimately a pledge of action still to come”.

“And it’s very frustrating to see countries that have spent six years conspicuously patting themselves on the back for signing that promissory note in Paris quietly edging towards default now that vulnerable nations and future generations are demanding payment here now in Glasgow.”

The Prime Minister, who faced as many questions about the sleaze row engulfing MPs as he did about the climate conference, warned that if leaders failed to deliver at Cop26 “the backlash will be immense, and it will be long lasting and frankly we will deserve that criticism, and their opprobrium”.

He said more ambition and credible plans for implementation were needed to deliver the emissions cuts required keep the 1.5C limit – beyond which the worst impacts of climate change will be felt – alive.

He acknowledged that keeping 1.5C within reach was “in the balance” but that did not mean it was impossible.

Mr Johnson’s comments come after Cop26 President Alok Sharma told people on the frontline of climate change that “we are fighting tooth and nail to make sure we have an ambitious outcome” to the talks.

Some of the most vulnerable countries have called for more action on finance, and warned that the language in the text is not strong enough to prevent dangerous warming.

The Alliance of Small Island States group’s chairman, Aubrey Webson, said: “We won’t get the ambition on emissions we need for 1.5C if we don’t scale up the provision of finance, and this includes the long-overdue recognition of a separate and additional component for loss and damage.”