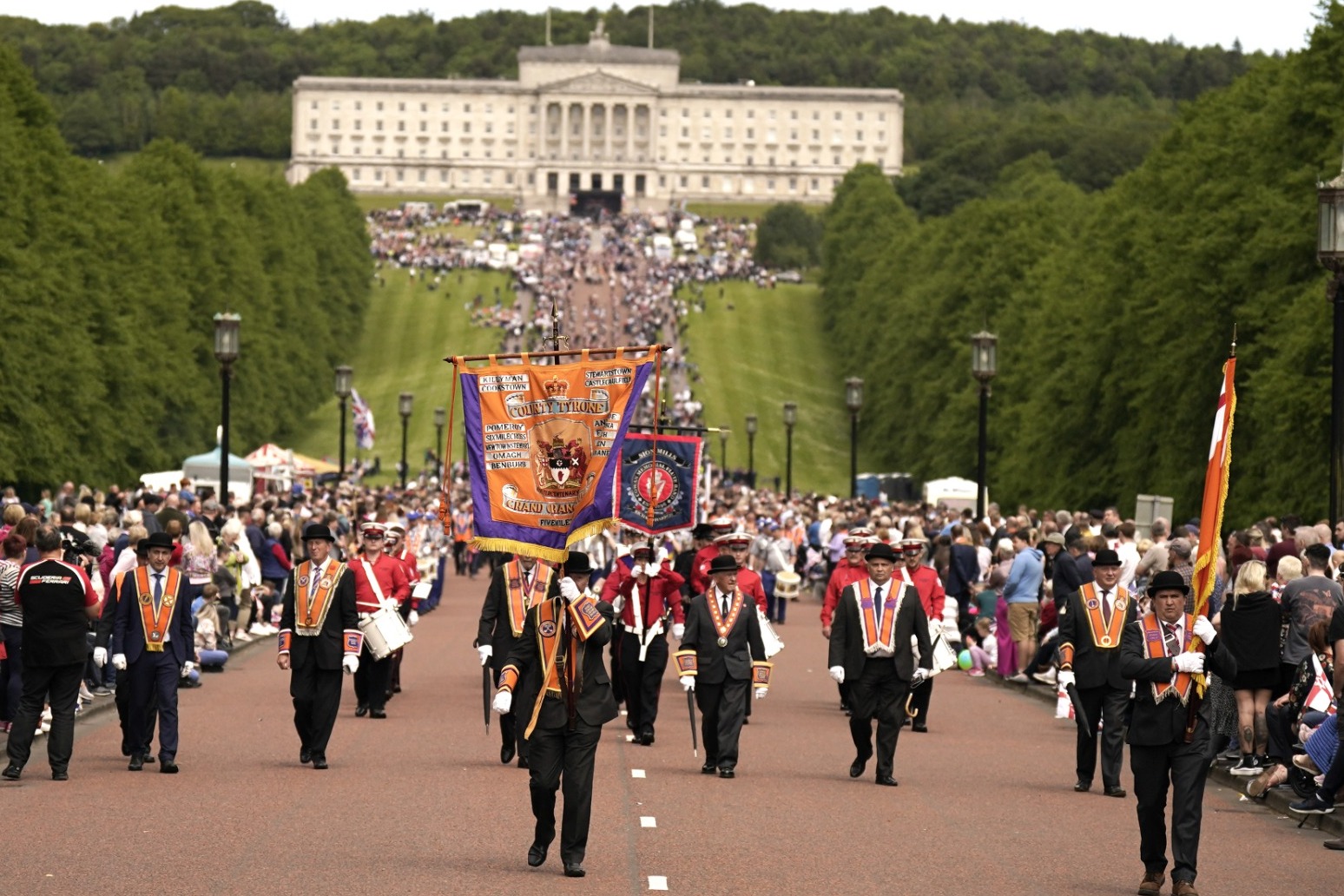 Cries of “no surrender” echoed at Stormont on Saturday as more thanr 10,000 people gathered to celebrate the centenary of Northern Ireland.

While political deadlock remains, people at the centenary event were upbeat and in a relaxed mood as they fanned out across the grounds of Stormont to celebrate the past, present and future of Northern Ireland.

They said the celebration, delayed by a year, was not overshadowed by the row over the Northern Ireland Protocol.

However, the post-Brexit arrangements which have paralysed politics in the region were mentioned repeatedly by speakers and others as one of the great threats to the place of Northern Ireland in the UK.

Grand Secretary of the Orange Order, Rev Mervyn Gibson, appealed for unity within unionism, as he hit out at US president Joe Biden and US congressman Richard Neal in his speech at Stormont.

He suggested that “compromise” might be necessary to secure the stability of Northern Ireland, telling the crowd: “We do not live in a world as we would like it to be. We live in a world in the reality of today, with its challenges for this generation.”

There were cheers and applause during his speech as he defended the place of Northern Ireland in the UK.

“Someone tweeted ahead of today that we as unionists are living in times of uncertainty and opposition. They are right, but that is and always has been the case,” he told the crowd.

“We have always lived in such times due to those within who want to destroy Northern Ireland for the sake of some new utopian Ireland where we are told we will all be valued.

“A new Ireland where the planter after 400 years will finally be accepted.

“Let me respond to this magnanimous gesture: we neither need your permission nor acceptance.

“We are here longer than Joe and Richie’s folks are in America. We are United Kingdom citizens by birth, Northern Irish through our culture and heritage, which makes us British by choice and conviction.

“We have no interest in becoming part of an all-Ireland. Save your breath.”

He continued: “Not one Unionist politician, not one, believes the protocol is good for Northern Ireland,” he said.

“The majority of Unionists have voted that political Unionism do not join an executive until the wrongs lurking in the protocol are rooted out and thrown out.

“Let us make it very simple for our European neighbours, not least those on the other side of the border in the Republic of Ireland.

“Two key elements must go, no tweaking, no tampering, no fudge, no constructive ambiguity, no excuses.

“We will not tolerate any system, process or structure that will allow checks on any goods trading within the UK for use within the UK.

“No fundamental change to the protocol, then no functioning Assembly.”

He continued: “The words of our forefathers still ring true for us today even from Derry’s walls to the signing of the Covenant. United we stand divided we fall.

“And the cry to those who seek to persuade us, protocol or push us into a United Ireland, is still the same, no surrender.”

Grand Master of the Orange Order, Edward Stevenson, opened proceedings by telling the crowd: ”From its earliest days, Northern Ireland had to face turbulent times and very many challenges.”

He was cheered as he promised that Northern Ireland will remain an “integral” part of the UK in the years to come.

He said: “Due to the adversity of those years, I believe that we are fully justified in not only commemorating, but proudly celebrating this anniversary.

“Disappointingly, but predictably, throughout 2021 there were those who told us that there is nothing to celebrate. They sought to belittle, undermine and erase the history of our people and our country.

“Rather than a celebration, they repeatedly downplayed the anniversary and all it stood for.

“Regrettably, even our own UK Government did little, despite much encouragement by this organisation and others, to ensure that the centenary was marked in a fitting way.”

Democratic Unionist Party leader Sir Jeffrey Donaldson was among many unionist politicians who joined the parade.

He told the PA news agency that the lack of a functioning Executive, which his party has prevented from forming, did not mean Northern Ireland could not be celebrated.

“We have lots to celebrate in Northern Ireland. We have come through adversity in the past and we faced it down. And we’re looking to build for the future. Of course we want to see Stormont restored, but that means restoring Northern Ireland’s place fully in the United Kingdom.”

“Everyone is welcome here and if people feel they can’t be here, that of course is a matter for them.

“But we are here to celebrate 100 years of Northern Ireland. We are proud of what has been achieved in that century and we’re looking ahead to the future,” he said.

Ulster Unionist Party leader Doug Beattie said it was important to “separate” the celebration of Northern Ireland’s history with the current political deadlock at Stormont.

He said: “We have to separate that slightly from the political ebbs and flows of this place.

“We have had many ebbs and flows as far as Stormont is concerned, and the devolved settlement, and we need to separate one from the other.

Mr Beattie said he understood some people will not want to celebrate the history of Northern Ireland.

He added: “Those people who want a united Ireland, many of them will not want to commemorate 100 years of this place we live in now, which we call Northern Ireland.

Some arrived as early as 9am along the route into the city centre, with Union flags hung along streets around Stormont.

The event to mark the creation of Northern Ireland in 1921 comes after the Covid-19 pandemic postponed the celebrations last year.

The Police Service of Northern Ireland (PSNI) warned ahead of Saturday that the parade was likely to cause delays and diversions for motorists in and around the city.

Some shops and businesses had been expected to close early to avoid the disruption.

Members of the Association of Loyal Orangewomen of Ireland, the Junior Grand Orange Lodge of Ireland, the Royal Black Institution and the Apprentice Boys of Derry, joined the parade.