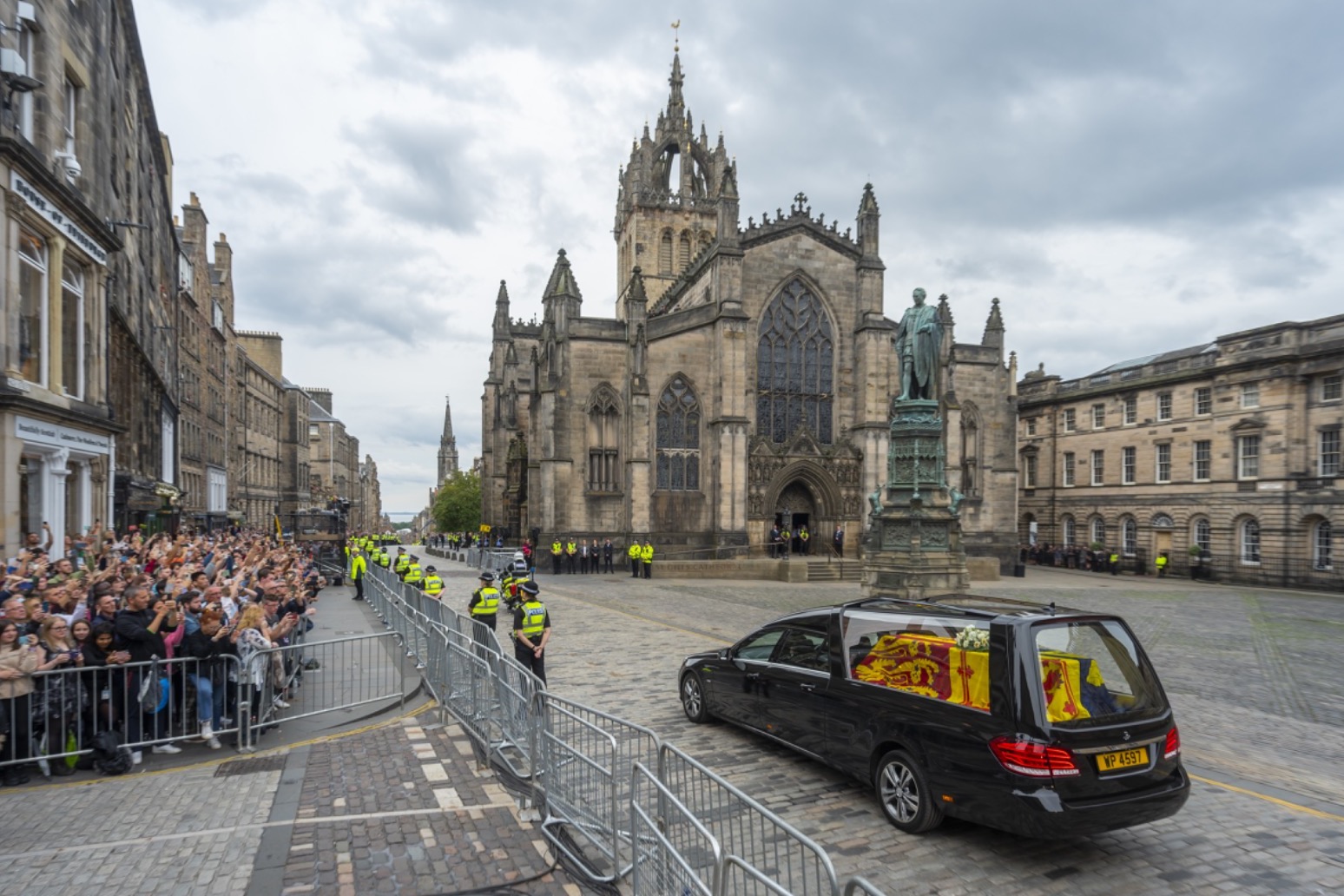 Scottish mourners paid tribute to the Queen by lining the route of her coffin procession in their thousands as she left Balmoral for the last time.

Silent, sombre and respectful, well-wishers gathered beside country roads, bridges and in village and city centres to say goodbye to the woman who was never more at home than when in Scotland.

By the time the procession reached its destination of Edinburgh’s Palace of Holyroodhouse, after more than six hours, the crowds were 10 deep in places on the famous Royal Mile, a famous thoroughfare the Queen knew well.

The Queen’s children and their spouses – Princess Royal and Vice Admiral Sir Tim Laurence, Duke of York and the Earl and Countess of Wessex – watched as soldiers from the Royal Regiment of Scotland carried the coffin into the Palace.

In a touching gesture, deference to the monarch was still observed, with the royal women curtseying and the men bowing their heads.

As the procession neared its end, flowers were thrown in front of the hearse – from William Purvis, a family run funeral directors based in Scotland – and spontaneous applause broke out from sections of the crowds in the Royal Mile.

At one point, as the cortege travelled through Dundee, a lone long-stemmed flower could be seen on the hearse windscreen and in a rural part of the route farmers paid homage to the Queen with tractors lined up in a field.

Her state funeral will be held on Monday September 19 and one of the first world leaders to formally accept an invitation was US president Joe Biden who will be joined by First Lady Jill Biden.

The Queen did not travel alone during her 180-mile journey, with Anne and her husband in a limousine as part of a procession directly behind her.

The First Minister of Scotland, Nicola Sturgeon, tweeted it was a “sad and poignant moment” as the Queen’s cortege left her “beloved Balmoral for the final time” just after 10am.

Labour leader Sir Keir Starmer described the sight of well-wishers lining the route of the Queen’s coffin as “incredibly moving” and welcomed the joint appearance of the Duke and Duchess of Sussex and Prince and Princess of Wales at Windsor Castle on Saturday.

He said: “I thought it was incredibly moving to see everybody who could come to the side of the road to pay their respects. It was an incredible, incredible moment. It reflects what the nation is feeling at the moment.”

Speaking about William, Kate, Harry and Meghan who put on a united front when they visited crowds outside Windsor Castle he added: “I think it was very moving to see those images of them together.

“I think for many, many people across the country at times of uncertainty, they want the reassurance that everybody is pulling together and uniting, whether that’s across the royal family, whether it’s across politics.”

The Queen’s oak coffin, draped with the Royal Standard of Scotland with a wreath of Balmoral flowers on top, began its journey from the Queen’s summer sanctuary in the Highlands and the first settlement it reached was Ballater.

Locals from Ballater considered the Queen a neighbour with the monarch and her family often seen in the village in Royal Deeside, which she had visited since childhood and where the monarchy have space to be themselves.

Hundreds lined the village’s main street as the Queen’s coffin was driven slowly past, and behind the well-wishers many shops displayed photographs of the Queen as a mark of respect.

The hearse passed Glenmuick Church, where the Rev David Barr rang the church bells 70 times after the Queen’s death was announced.

Flowers were thrown into its path by villagers on both sides of the road in Ballater, which was sombre and silent.

The hearse slowed to a fast walking pace and mourners could clearly see the royal standard-draped coffin and the wreath featuring flowers from the Balmoral estate, including sweet peas – one of the Queen’s favourite flowers – dahlias, phlox, white heather and pine fir.

Elizabeth Taylor, from Aberdeen, had tears in her eyes as she considered what she had just seen.

She said: “It was very emotional. It was respectful and showed what they think of the Queen.

“She certainly gave service to this country, even up until a few days before her death.”

The Queen’s oak coffin began its journey when it was carried to the hearse by six Balmoral estate gamekeepers tasked with the symbolic gesture.

It had been at rest in the Balmoral ballroom so the monarch’s estate workers could say their goodbyes.

Adele Phillips, who was a housekeeper to the Queen at her Balmoral estate, joined the crowds lining Ballater’s main street and spoke about a side of the Queen very few knew.

She told BBC News: “I didn’t know her in the way that the public do – I saw her in her little tweed skirt and her head scarf and that kind of thing.”

Asked “what was she like?” Ms Phillips replied: “Funny, always happy, she liked a joke and she was sarcastic.”

The procession provoked different reactions from the public, a hush descended on around 100 people waiting on a roundabout of the A90 outside Dundee, with some giving tentative applause, while one man called out “thank you, thank you” as the coffin passed.

Afterwards Gillian Nicholl, from St Andrews, who had come with her children Romy, 22, and Freya, 15, said: “It went very still and it was very atmospheric.

“I have never seen such a large crowd go so quiet. It was very sombre, there was a wee clap but it didn’t feel right.”

In Edinburgh’s Royal Mile American tourist Susanne Sedel, 62, from Seattle was with her son Erik Sedel, 31, as the Queen’s coffin passed.

Ms Sedel, who changed their plans so they could see the cortege and pay their respects, said: “It was a touching moment, it was really touching. I was happy that it was quiet at the moment when she went passed, but glad that people then broke out into a round of applause. I felt she deserved that.”