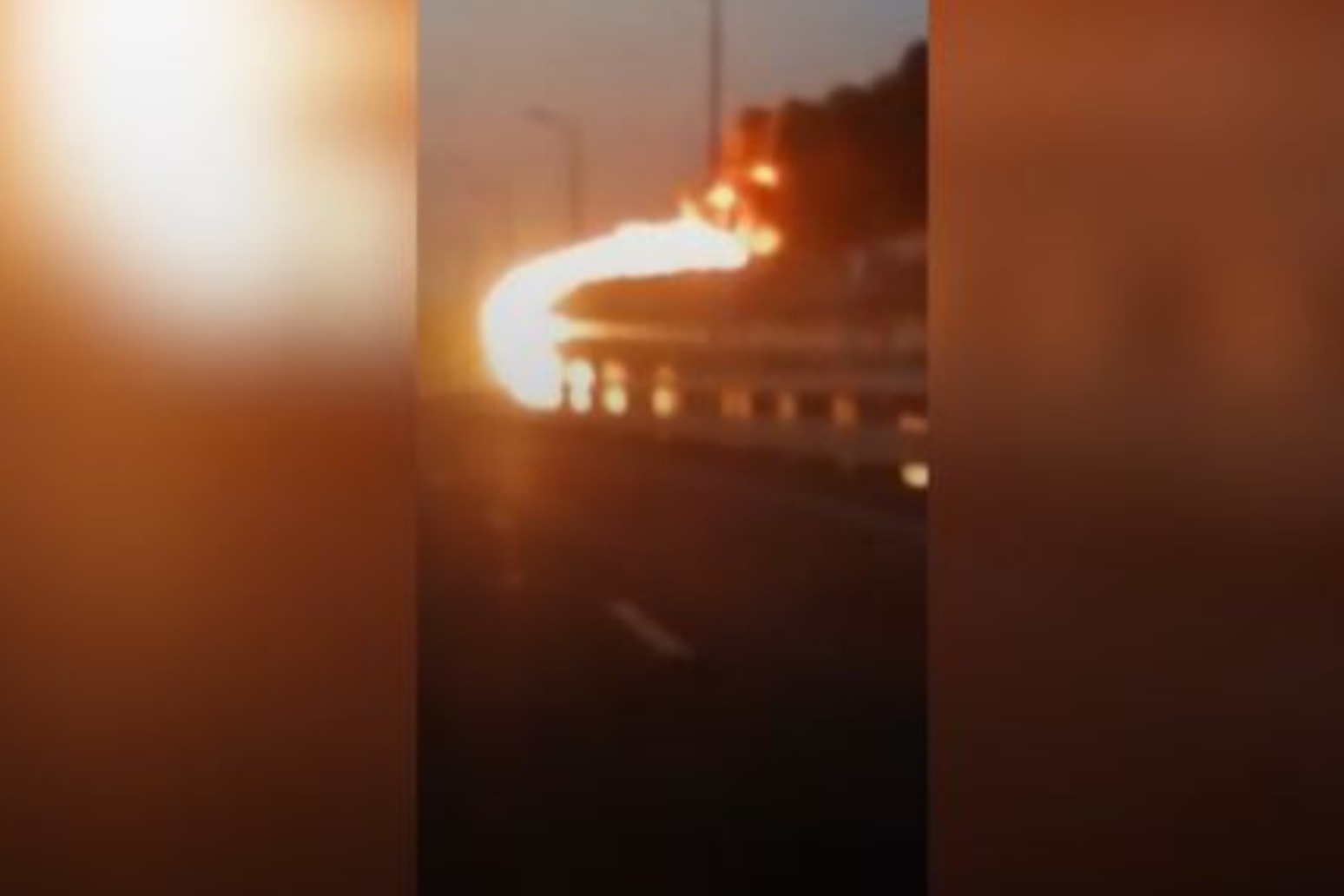 An explosion has caused the partial collapse of a bridge linking Russia to the Crimean peninsula, damaging a key supply artery for the Kremlin’s faltering war effort in southern Ukraine.

Russian authorities said a truck bomb caused the blast and that three people were killed.

The speaker of Crimea’s Kremlin-backed regional parliament accused Ukraine of being behind the explosion, though Moscow did not apportion blame.

Ukrainian officials have repeatedly threatened to strike the bridge and some lauded the destruction, but Kyiv stopped short of claiming responsibility.

The bombing came a day after Russian President Vladimir Putin turned 70, dealing him a humiliating blow that could lead him to up the ante in his war on Ukraine.

In another potential setback for Mr Putin, a Kremlin-backed official in Kherson, one of four Russia-annexed regions in Ukraine, announced a partial evacuation of civilians.

Russian legislators urged Mr Putin to declare a “counterterrorism operation” in response. Such a move could be used by the Kremlin to further broaden the powers of security agencies, ban rallies, tighten censorship, introduce restrictions on travel and expand a partial mobilisation that the president ordered last month.

A man and a woman who were riding in a vehicle across the bridge were killed by the explosion and their bodies were recovered, Russia’s Investigative Committee said. It did not provide details on the third victim or the truck driver.

The blast occurred even though all vehicles driving across the bridge undergo automatic checks for explosives by state-of-the-art control systems, drawing a stream of critical comments from Russian war bloggers.

The truck was owned by a resident of the Krasnodar region in southern Russia, Russia’s Investigative Committee said. It said investigators arrived at his home as part of the inquiry and are looking at the truck’s route and other details.

The 12-mile bridge across the Kerch Strait linking the Black Sea and the Sea of Azov opened in 2018 and is the longest in Europe.

The £3.2 billion project is a tangible symbol of Moscow’s claims on Crimea and has provided an essential link to the peninsula, which Russia annexed from Ukraine in 2014.

Crimea holds symbolic value for Russia and is key to sustaining its military operations in southern Ukraine. While Russia seized areas north of Crimea early on during the invasion and built a land corridor to it along the Sea of Azov, Ukraine is pressing a counteroffensive to reclaim them.

The Russian Defence Ministry said troops in the south were receiving necessary supplies through the land corridor and by sea. The Energy Ministry said Crimea has enough fuel for 15 days and it was working on ways to replenish stock.

The bridge has train and road sections. The blast and fire caused the collapse of one of the two links of the road bridge, while another link was intact.

Vehicle traffic resumed on Saturday afternoon on one of the two links that remained intact from the blast, with the flow alternating in each direction and vehicles undergoing a “full inspection procedure,” Crimea’s Russia-backed regional leader, Sergey Aksyonov, wrote on Telegram.

Rail traffic was resuming slowly. Two passenger trains departed from the Crimean cities of Sevastopol and Simferopol and headed toward the bridge on Saturday evening. Passenger ferry links between Crimea and the Russian mainland were being relaunched Sunday.

Mr Putin was informed about the explosion and ordered the creation of a government panel to deal with the emergency.

The speaker of Crimea’s Kremlin-backed regional parliament blamed Ukraine for the explosion, but downplayed the severity of the damage and said the bridge would be promptly repaired.

Leonid Slutsky, head of the foreign affairs committee in the lower house of Russian parliament, said “consequences will be imminent” if Ukraine is responsible.

Gennady Zyuganov, head of the Russian Communist Party, which is nominally in the opposition but votes in line with Kremlin wishes in parliament, said the “terror attack” should serve as a wake-up call.

“The long-overdue measures haven’t been taken yet, the special operation must be turned into a counterterrorist operation,” he said.

The parliamentary leader of Ukrainian President Volodymyr Zelensky’s party on Saturday stopped short of claiming Kyiv was responsible but appeared to cast it as a consequence of Moscow’s takeover of Crimea.

“Russian illegal construction is starting to fall apart and catch fire. The reason is simple: if you build something explosive, then sooner or later it will explode,” David Arakhamia, the leader of the Servant of the People party, wrote on Telegram.

The secretary of Ukraine’s National Security and Defence Council, Oleksiy Danilov, tweeted a video with the Kerch Bridge on fire alongside Marilyn Monroe singing her famous Happy Birthday, Mr President.

The blast on the bridge occurred hours after explosions rocked the eastern Ukrainian city of Kharkiv early on Saturday, sending plumes of smoke into the sky and triggering a series of secondary explosions.