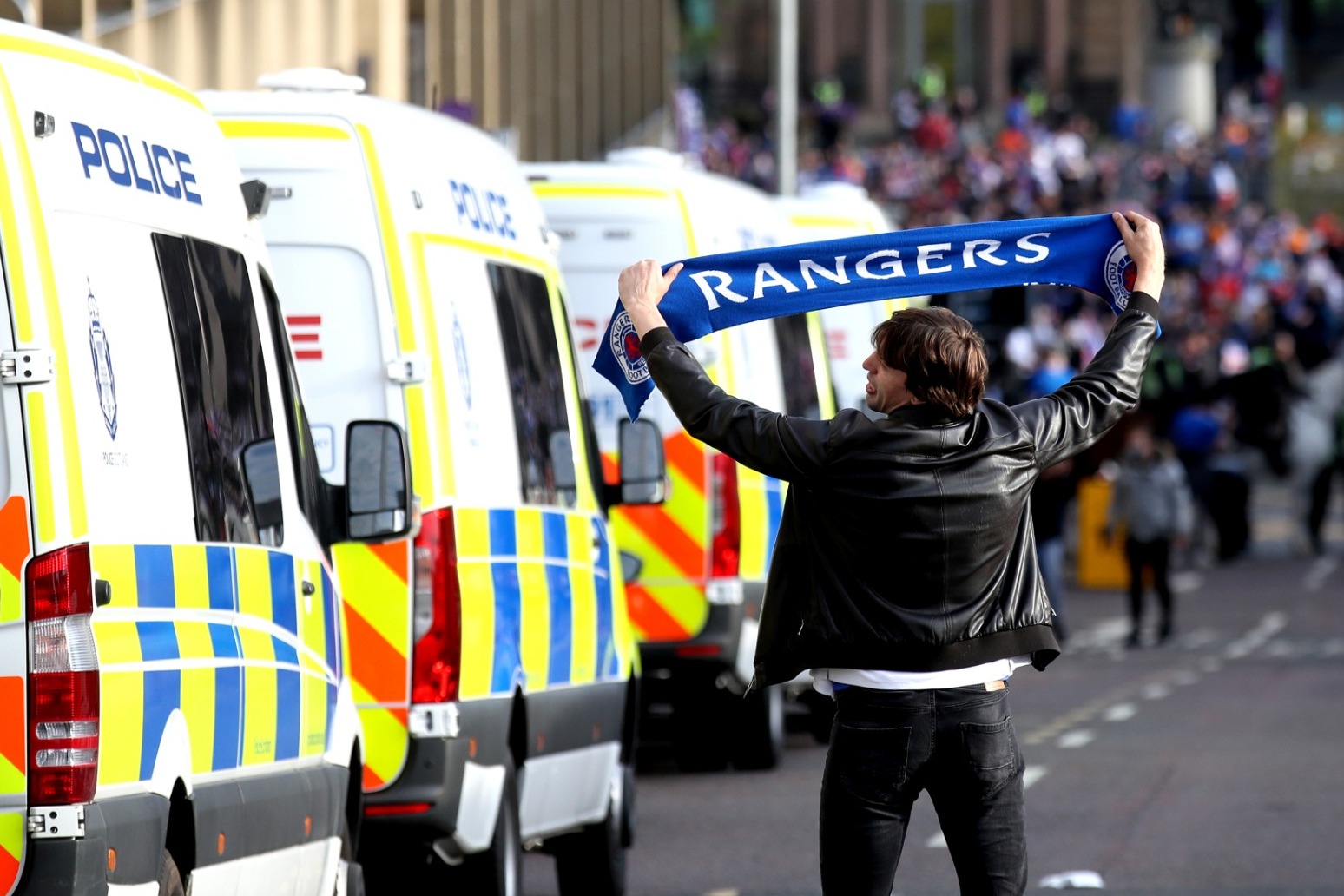 Three police officers were injured and 20 people arrested as authorities dispersed a large crowd of celebrating Rangers fans in central Glasgow due to “rising disorder”.

Thousands of supporters took to the streets in celebration of Rangers’ first Scottish Premiership trophy in a decade, with many marching from Ibrox to George Square despite warnings against large gatherings due to coronavirus.

After supporters celebrated in the city centre square for hours on Saturday – singing, dancing and setting off fireworks – police said some fans became unruly, with property damaged, people assaulted and missiles and flares being thrown at officers.

Police Scotland Deputy Chief Constable Will Kerr said on Twitter that “many more arrests will follow in the coming weeks”.

Footage on social media showed packs of fans brawling with each other, and launching traffic cones, plastic bollards and other missiles at lines of riot gear-clad police officers.

Images showed George Square strewn with hundreds of broken bottles, plastic bags and spent flares after crowds were moved out of the area.

Scottish Justice Secretary Humza Yousaf said on Sunday it was “disgraceful” that officers were subject to “the kind of thuggery we saw last night”.

He tweeted: “Incidents of violence, disorder, anti-Catholic & any other hatred will be followed up.”

Police formed a line and cleared the group from the area just after 9pm, with Police Scotland describing the fans’ behaviour as “disgraceful”.

“Our officers became the focus of the crowd’s attention with missiles and flares being thrown at them,” chief superintendent Mark Sutherland, Police Scotland’s Divisional Commander for Greater Glasgow, said in a statement.

“Our policing response has been proportionate. We have responded appropriately and consistently to the behaviour of those gathered.

“This disgraceful behaviour which clearly endangered public and officer safety could not be tolerated and officers dressed in full public order equipment and, after appropriate warnings were given, moved in to disperse those present.

“Although most of those present dispersed, a number remained and confronted officers with violence and aggression. Missiles were thrown and officers came under direct attack as George Square and the surrounding area was cleared.

“I strongly condemn the behaviour of these supporters who have not only placed our officers at risk but have sought to damage the image and reputation of this great city, especially during this critical period of the pandemic.”

Mr Yousaf called the gatherings in Glasgow “selfish and irresponsible behaviour” which put lives at risk.

“I understand the significance of this day for Rangers fans but I am extremely disappointed that supporters have once again ignored Covid regulations and chosen to gather in large numbers in Glasgow,” Mr Yousaf said.

“This selfish and irresponsible behaviour endangers the lives of others – supporters, the police on duty and the wider community.”

Fans had been warned against gathering to celebrate due to rising Covid-19 cases in Glasgow.

However, supporters outside Ibrox were cheering and chanting as the Rangers players arrived for the 12.30pm kick-off.

Police Scotland had called on them to “disperse and take personal responsibility”.

After the trophy was lifted, many fans made their way into the heart of Glasgow.

The Union Bears fan group had earlier announced plans to walk from the stadium to George Square.

On Friday night, scores of Rangers fans lit red flares simultaneously along the River Clyde in the city as they marked the end of the season.

In an earlier statement on Saturday, chief supt Sutherland said: “We understand the importance of football in Glasgow, how it connects our communities and, is for many, a culture and a way of life.

“We are, however, still in the midst of a pandemic and under coronavirus restrictions people should not be gathering for any reason.”

He said a request for a fan procession to the city centre had been declined, but police later decided to escort large groups of supporters as they made their way to George Square in order to minimise disruption.

While some arrests were made in the afternoon for anti-social behaviour, chief supt Sutherland said due to the largely peaceful nature of the crowd at that time “it would not be proportionate for our resources to use a high level of force through public order policing to disperse those gathering”.