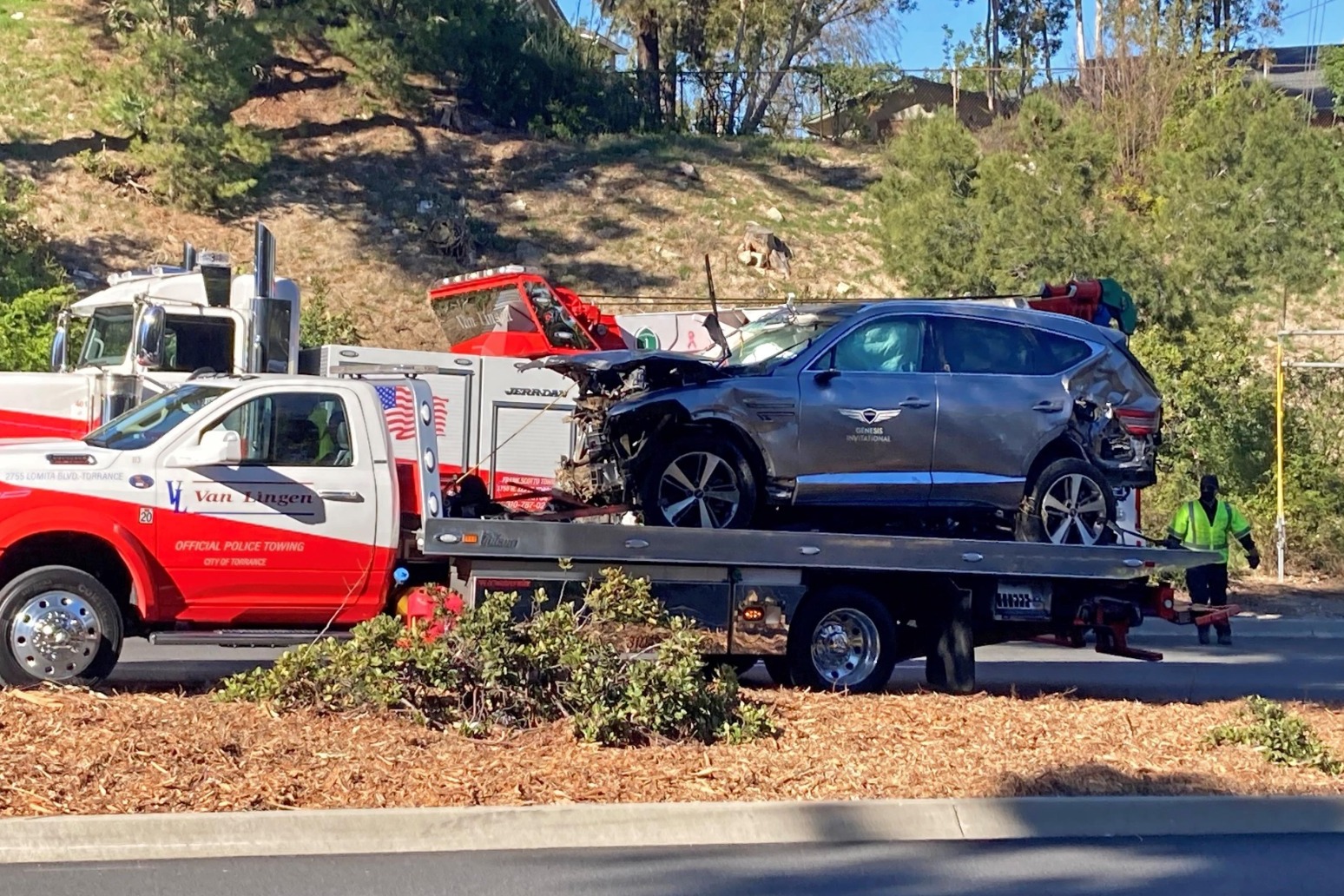 Tiger Woods is facing the toughest recovery of his remarkable comeback-filled career after undergoing surgery on right leg injuries following a car crash which could have cost him his life.

Woods was driving through a sweeping, downhill stretch of road through coastal suburbs of Los Angeles when his car struck a sign, crossed over a raised median and two oncoming lanes and toppled down an embankment, coming to a halt on its side.

A sheriff’s deputy poked his head through a hole in the windscreen to see Woods, still wearing his seatbelt, sitting in the driver’s seat after the airbags had deployed.

The crash caused “significant” injuries all down his right leg that featured rods, pins and screws during what was described as a “long surgical procedure” at Harbor-UCLA Medical Centre.

Anish Mahajan, the chief medical officer, said Woods shattered tibia and fibula bones on his right leg in multiple locations. Those were stabilised by a rod in the tibia. He said a combination of screws and pins were used to stabilise additional injuries in the ankle and foot.

“I will say that it’s very fortunate that Mr Woods was able to come out of this alive,” said Carlos Gonzalez, the deputy from the Los Angeles County Sheriff’s Department who was the first on the scene after a neighbour called the emergency services.

No charges were filed and police said there was no evidence Woods was impaired.

“As if his body hasn’t endured enough,” golf’s world number two Jon Rahm, said from the Workday Championship in Florida. “I just hope he can get out of the hospital after recovery and he can still play with his kids and have a normal life.”

The single-car crash was the latest setback for Woods, who at times has looked unstoppable on the golf course with his 15 major championships and record-tying 82 victories on the PGA Tour.

He is among the most recognisable sports figures in the world, and at 45 with a reduced schedule from nine previous surgeries, remains golf’s biggest draw.

He won the 2008 US Open with shredded knee ligaments and two stress fractures in his left leg.

His personal life imploded in 2009 when he was caught having multiple extramarital affairs, and he returned to win his 11th award as PGA Tour player of the year and reach world number one.

Then, after four back surgeries that kept him out of golf for the better part of two years, he won the Masters in April 2019 for the fifth time.

Woods was in Los Angeles over the weekend as tournament host of the Genesis Invitational at Riviera Country Club and was heading to Rolling Hills Country Club when the accident happened.

Woods played golf with both of them and Trump awarded him the Presidential Medal of Freedom in 2019.

Woods had a fifth back surgery, a microdiscectomy, on December 23, just three days after he played the PNC Championship with his 12-year-old son Charlie.

“I’m sick to my stomach,” said world number three Justin Thomas. “It hurts to see one of my closest friends get in an accident. Man, I just hope he’s all right.”

The crash happened at about 7.15am as Woods drove his courtesy vehicle from the Genesis Invitational through the upscale suburbs. Mr Gonzalez says he sometimes catches people topping 80mph in the 45mph zone and crashes are common.

Police said Woods was alert as firefighters pried open the front windscreen to get him out. Los Angeles County Sheriff Alex Villanueva said the airbags deployed and the inside of the vehicle stayed mostly intact, which “gave him a cushion to survive the crash”.

Authorities said they checked for any odour of alcohol or other signs he was under the influence of a substance and found none. They did not say how fast he was driving.

This is the third time Woods has been involved in a car investigation.

The most notorious was the early morning after Thanksgiving in 2009, when his vehicle ran over a fire hydrant and hit a tree. That was the start of revelations that he had been cheating on his wife with multiple women.

In May 2017, Florida police found him asleep behind the wheel of a car parked awkwardly on the side of the road. He was arrested on a DUI charge and said he had an unexpected reaction to prescription medicine for his back pain.

Woods later pleaded guilty to reckless driving and checked into a clinic to get help with prescription medication and a sleep disorder.