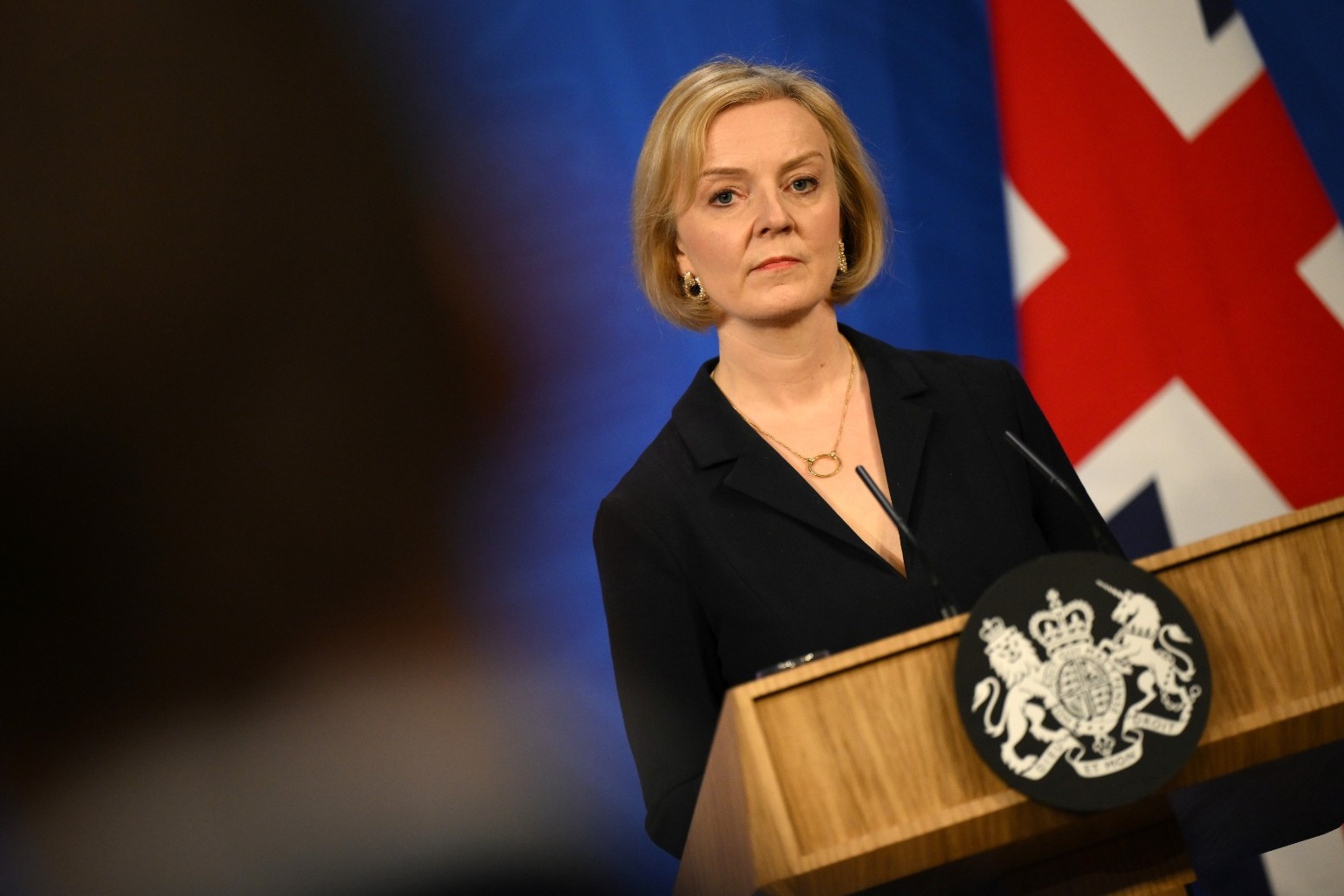 Liz Truss is battling to save her premiership after new Chancellor Jeremy Hunt ditched the bulk of her economic strategy.

Mr Hunt scaled back the energy support package and ditched “almost all” the tax cuts announced by his predecessor Kwasi Kwarteng less than a month ago as he attempted to restore economic stability following weeks of turmoil on the financial markets.

Ms Truss became Prime Minister after winning the Tory leadership contest on the back of promises to dramatically cut tax, and the wholesale abandonment of the policies has left her fighting for her job after just six weeks.

In an emergency statement designed to calm the markets, Mr Hunt:

– Announced the plan to cap the cost of energy for all households for two years would now end in April, with targeted help beyond that for those most in need.

– Scrapped April’s planned 1p cut to the basic rate of income tax, which will now stay at 20p indefinitely, raising an extra £6 billion a year.

– Ditched a 1.25 percentage point cut in dividend tax planned for April, worth around £1 billion a year to the Exchequer.

– Dropped plans to ease IR35 rules for the self-employed, saving around £2 billion.

– Axed a new VAT-free shopping scheme for overseas tourists, which will save around £2 billion.

– Reversed a decision to freeze alcohol duty rates from February 2023, worth around £600 million a year.

The Government had already abandoned plans to scrap the 45p rate of income tax for top earners and had U-turned over a promise not to increase corporation tax.

The changes dramatically cut the cost of Mr Kwarteng’s £45 billion tax giveaway, reducing it by around £32 billion.

Financial markets, which had been spooked by the prospect of unfunded tax cuts on top of emergency interventions in the energy market and the cost of Covid-19 support, appeared reassured by Mr Hunt’s announcements.

The pound and UK Government bonds rallied in response to the statement, while economists suggested the Chancellor’s approach may reduce the need for dramatic interest rate rises.

In a televised statement, the Chancellor – who only took office on Friday – warned of more “tough” decisions to come.

“Governments cannot eliminate volatility in markets but they can play their part and we will do so,” he said.

Plans to cut national insurance contributions and a reduction in stamp duty, which are already going through Parliament, will continue.

The Chancellor said: “It is a deeply-held Conservative value – a value that I share – that people should keep more of the money that they earn.

“But at a time when markets are rightly demanding commitments to sustainable public finances, it is not right to borrow to fund this tax cut.”

Ms Truss said the Government was taking action to “chart a new course for growth that supports and delivers for people across the United Kingdom”.

But Angela Richardson became the fourth Tory MP to call publicly for Ms Truss to stand down, saying the problems with the public finances were “100% down to the Prime Minister”.

She told Times Radio: “I just don’t think that it’s tenable that she can stay in her position any longer. And I’m very sad to have to say that.”

While under current party rules Ms Truss is protected from a leadership challenge for 12 months, that could easily change if enough Tory MPs demand change.

Former chief whip Andrew Mitchell said the Prime Minister had just a fortnight to save her premiership.

“If over the next two weeks it becomes clear to the parliamentary party that the Prime Minister needs to change, or be changed, then the technicalities or the mechanism are not important,” he told Times Radio.

“The wish of the parliamentary party will assert itself… if she cannot do the job, she will be replaced.”

Ms Truss will meet the moderate One Nation Conservatives group in Parliament on Monday evening before an informal reception with her Cabinet.

But she ducked a parliamentary clash with Labour leader Sir Keir Starmer, instead sending Commons Leader Penny Mordaunt – viewed as a potential successor – in her place.

Allies acknowledged it was a crucial 24-48 hours for Ms Truss’s premiership.

“The Prime Minister is listening to the public,” her official spokesman said.

“She is listening to advice on the markets, she is listening to her colleagues and she is making the necessary difficult decisions to change our approach so that we can provide the economic stability and indeed maintain that stability of leadership, which is important.”

With discontent spreading across the party, the difficulty facing those MPs seeking change is the lack of a consensus candidate they can rally around to avoid another bitter leadership contest.

She said only one MP has a mandate from party members and from the British public: Boris Johnson.

“The choices are simple – back Liz; if not, bring back Boris or face a GE (general election) within weeks,” she said.